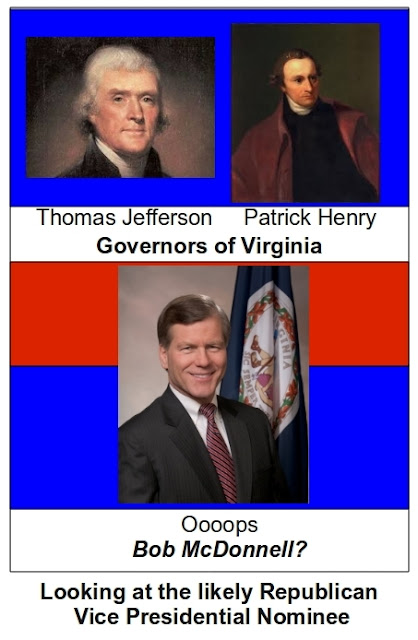 Shake Hands with the Governor of Virginia
Still bathing in the glory of his successful moves for state enforced vaginal penetration, all eyes are on Virginia Governor, Bob McDonnell, as he humbly waxes and buffs his notable humility.  The man can't get past his bathroom mirror in the morning without primping his own pregnant expectation to soon be sitting in the Vice Presidential slot along side the survivor of the bloody Republican Primary.
Governors of Virginia, in general, are not a particularly interesting topic for a MeanMesa posting.  However, in this election year, a ghostly apparition seems to be following the Republican candidates like the Spirit of Christmas Past trailed Ebenezer Scrooge.
"Apparition?"
Yes.  The unmentioned wet dream which emerges in every Republican "debate"  -- which means that it emerges very often -- is the prospect of a miraculous election delivery in the hands of a so far unnamed candidate.  Those ghostly vapors, naturally, also include a Vice Presidential selection which might, somehow, breathe a desperately welcome aura of psychological stability into the front runner choices.
This is the "spiritual portal" through which Governor Bob McDonnell peers with such an obviously longing heart.  Unhappily for Bob, the vaginal penetration idea turned out to be a bucket of cold water on the ghostly vapor.  Although the wing nut, anti-women knuckle draggers in the now wholly owned Virginia State Congress were ecstatic with the Governor's latest vaginal "red meat" dog whistle, Virginians in general were somewhat less enthusiastic.
Although a reasonable observer of domestic politics might presume that the fumbled vaginal attack would spell the end of Bob's Vice Presidential ambition, Republicans apparently have no particular problem with it.  This MeanMesa post will focus on Bob's Regent University graduate thesis so we can get a little more depth in our understanding of man who wishes, so very much, to be a "heart beat away" from the command of our country's nukes.
A Very Fast, Very Guided Tour of Regent University
First, a brief visit to Regent University.  The place gained a fleeting moment of relevance during the Bush autocracy because it was a favorite "fishing hole" for the recruiting  efforts of the heavily soiled US Attorneys General, Ashcroft and Gonzales.  These Dark Ages religious crusaders hired many dozens of young wing nut fundamentalists from the Regent University "law school," insinuating them into civil service jobs all over the Justice Department.
The civil service comment is important because this means that these Federal employees have [note: not "had..."] permanent jobs, that is, not employment at the favor of the President.  This means that all these creepy "law school" graduates are still there, doing what they do.  Bob studied at Regent University for a MA in Public Policy and a Juris Doctor in Law.  His thesis is dated 1989.

He is just as creepy as the rest of the Old Testament Biblical horde so anxiously employed by Ashcroft and Gonzales. It turns out, in fact, that the sole purpose of Regent University is the production of such "second agenda" recruits, that is, "lawyers" devoted to "Glorifying God" with the secondary agenda of practicing law only for the "Glory of God."  Naturally, only Republicans would ever be interested in placing such folks in any positions of administrative responsibility within the government.

Pat flew in the blood diamond mining equipment aboard his 700 Club financed Operation Blessing aircraft and operated the mining operation with what has been described as "slave labor."  (read more) Pat's penchant for the "glitter rocks" led to another of his "humanitarian" enterprises, the African Development Company, with similar opportunities for lots more blood diamonds and Biblical transgressions in Zaire.

This was the founder of CBN College, later, Regent University, where Bob McDonnell snatched up his law degree.  The fruit doesn't fall far from the tree. However, we now see that Pat's spiritually inspired "crimes against humanity" didn't stop at the borders of distant Liberia and Zaire.  They now visit much closer to home with proselyte McDonnell's lovely and revealing Masters Thesis about family values, perhaps an unavoidable torpedo to his Vice Presidential ambitions.


Governor Bob's Thesis
THE REPUBLICAN PARTY'S VISION FOR THE FAMILY

THE COMPELLING ISSUE OF THE DECADE

by
Robert F. McDonnell
A.B.A, University of Notre Dame, 1976
M.S.B.A., Boston University, 1980
THESIS
Submitted in partial fulfillment of the requirements
for the degrees of Master of Arts in Public Policy
and Juris Doctor in Law
College of Law and Government
CBN University
Virginia Beach, Virginia
1989
(Read the entire thesis here - courtesy of the Washington Post)
MeanMesa found the Regent University's library "pdf" file of Bob's thesis presented in a way which prohibits direct "copy and paste" retrieval of the content.  Still, the prospect of introducing some examples of Bob's writing as elements of this post was simply too attractive to allow such an inconvenience to prevent their inclusion.  So, MeanMesa has manually transcribed a few samples of Bob's ideas, making a special effort to carefully copy the precise syntactic and grammatical  anomalies found in the original document.

Here you can read a few random excerpts quoted directly from the Washington Post's file.  Visitors may find these few passages, extracted from roughly the first third of the paper, both interesting and entertaining at this point, but if Bob manages to take the Vice Presidential slot on the 2012 Republican ticket, readers will definitely want to visit the Washington Post site to read the whole, messy business as carefully as possible.  It may be an inconveniently honest glimpse into the man's, uh, soul.