A short and passionate tale of elderly street theater.

Senator McCain scheduled a nice, dull town hall meeting here in Albuquerque. Some of the younger ones wanted to travel down to the UNM (University of New Mexico) campus and stand around demonstrating.

All that seemed reasonable enough. After all, it was a magnificent New Mexico autumn day, sunny and mild, and who knows? A friendly crowd offered the portent of pleasant company and new acquaintances.

I got busy on my home-made sign right away. Spreading the cardboard out on the living room floor and unceremoniously dumping all three boxes of various, colored magic markers nearby on the carpet, I began. As a neighborhood organizer for the Obama Campaign, all manner of aggressive and outlandish ideas for my sign's message were rushing through my mind. Still, there was my anticipation of some design problems, not the least of them the fact that half of the markers were, well, frankly, dried up and useless. Naturally, those would be all the good sign colors.

Furtive memories of that now ancient rebellious glory in Chicago at the Convention in 1968 were, by now, coursing through these old bones like an IV of adrenalin. One lesson of those halcyon days was to always use at least a 1" x 2" for a holding board. Another lesson was to never underestimate the persuasive impact of, yes -- you've got it -- street theater!

The right wording and a few of my "most geezerly" old people clothes would be enough for me to launch my one man mission to sign up young people for my "Youth for McCain" movement! Taping an American flag from WalMart (spelled: China) on the handle of my cane, finished the picture! 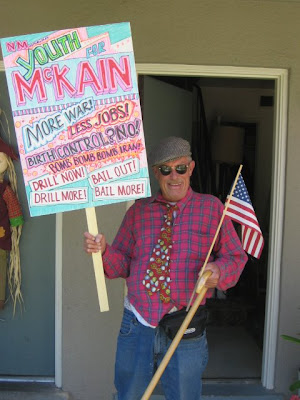 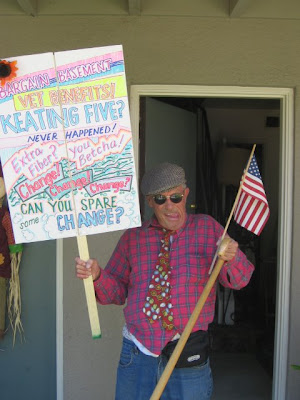 Of course, it would take both sides of this masterpiece to fully communicate the compelling nature of this invitation to these, till now, misdirected young people. I added a great, paper sunflower from Dollar General to "draw in the young girls."

That Obama rally was clearly on its last legs. Moving bravely into the midst of the crowd, I began.
"Get a haircut!"
"Join the Army!"
"Buy some stock!"
"Get with the McCain ticket, you spoiled back sliders!"
For those intrepid enough to endure these "American Dream" introductions, I immediately followed up with:
"I'll bet you don't even have a mortgage."

It was a great success! The mortgage crack kept eliciting responses such as "I'm only eighteen," but nothing could deter me once I was obviously on a run. To top off any of these dramatic epithets which got this far, I went on:

"Damned spoiled punk kids! Ingrates! Can't you appreciate all the sacrifices and hard work us old geezers have done to make this world what it is?"

"Grampy McCain is better than you deserve! Now. just hold your nose and get out there and vote for him!"

"You'll look good with a uniform and a rifle!"

Naturally, I offered some well seasoned geriatric advice to the young ladies, too. The astounding and inspiring fecundity of the second candidate in the "Youth for McCain" movement could hardly be overlooked. They were all transfixed by me, my well aged wisdom, that is.

"Have some babies, dammit!"

"America's tax paying future is depending on you!"
Oh well, I assume you have a fairly good picture by this point. Everyone had a good time except the Republicans who found themselves trapped in the auditorium.

Obama for President!
Posted by Chad H at 9:43 PM