A very competent “stand in” for one of my radio favorites made some statements which simply can’t be “left to rest.” Mr. Thom Hartmann, in my opinion a very convincing expert on almost everything, was out of his studio for a well deserved vacation on the Air America cruise. His replacement, Mr. Lee Rayburn (Air America, November 20, 2008, “The Thom Hartmann Radio Show,” http://thomhartmann.com), led a bit of a sputtering radio debate concerning population growth and population control.

A zany caller injected the idea of sterilizing immigrants to get the thing going.

As things progressed, Mr. Rayburn added his strongly held view that he didn’t want “government in his bedroom,” implying that limits on birth were unacceptable to him. He followed up with a conditional statement concerning environmental problems, his introduction to the statement being “If population control was really deemed a concern, then ...”

Now, a few clear statements as to why this was troubling. 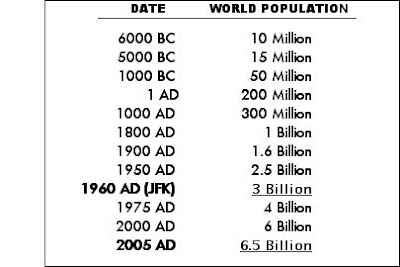 
If we innocently derive a simple fraction from these statistics, it might be this one: “During a period of population at its current level, that is, 6.5 billion, around 1/3 or, roughly 2 billion, are extremely hungry every day, making the estimate of the planet’s food producing capacity enough to feed around 4 billion.” If population increases at its assumed rate, it will reach around 10 billion by 2020, 14 billion by 2050, and so on. Planetary food production has never increased at the rate that population increases.

Currently, we draw some comfort from the idea that advancements in agricultural technology and improvements in international political situations can mitigate some of this approaching conflict. Although quite possibly true, history strongly suggests that these advancements primarily favor the rich and powerful much more than the hungry.

No modern military technology, no matter how violently employed, can make much of a dent in the population curve. For example, a full nuclear exchange between the United States and the old Soviet Union could have produced a net population reduction of about 340 million. The current population increase could replace those lost souls in roughly two years. Chemical and, especially, biological weapons might, ultimately, be more efficient at population reductions, but the “horror gradient” seems to elude calculating long term impact. We can assume, perhaps, a greater “dent” than nuclear war, but in the historical frame, not one with much more of a permanent influence.

The most probable outcome will be something described as a “Malthusian Correction.” When the food, water and living space equation lags too far below the population increase, the system will “correct” itself. The “Managing Global Warming” paper (this blog site: June, 2008) includes a speculative model which suggests a planetary population reduction of roughly 2-3 billion, that is, a reduction from 7 billion to 4 or 5 billion, based primarily on the negative impact of climate change. This view of population “correction” may be expected to draw significant horsepower from the climate change impact, at least as one of several initiating circumstances.

Did we expect a 2 or 3 billion reduction in planetary population to present anything more than a “slightly less than comfortable status quo,” distant foreign relations difficulty?

Now, returning to Mr. Rayburn’s dislike of having the “government in his bedroom,” and his conditional clause, “If population control was really deemed as a concern...,” we arrive at some unlikely answers.

In such a world, we might find the presence of government forces at least nearby to our bedroom quite reassuring. Further, so far as deeming “population control as a concern,” we might, well, actually, really deem it as a concern.

Finally, to bring this entire matter to a sensible, on-the-ground argument, the following facts must also be included.

1. I am not the world’s smartest mathematician.
2. I claim no particular knowledge of complex extrapolative methods to analyze population growth.
3. I have no information about this which is secret or concealed from anyone. If you are reading this blog, you are privy to precisely the same information I have.

Take a moment. Carefully weigh the value you might attach to religious or ideological priorities which have, so far, effectively blocked any serious response to population management.

So, Mr. Rayburn, no matter how inviting it may be, how much longer can we insist upon injecting irrelevant distractions such a abortion, birth control, religion, stem cell research or “too much government intervention in the bedroom” as a rational counter balance to our new job as a participant in a global Malthusian Correction?

Will I still have an AM radio? Will it be the "crank" kind instead of the "plug in" kind?