A Chit Chat with Republicans About the Stimulus

A Primer About Obama's Recovery Plan85

It has become very intellectually chic to chuck pot shots at the Recovery Program of President Obama. Of course, we expected the really “trailer park” fizzle from the vacuous, foaming mouths of the neo-cons. One female host, Tammy Bruce, actually called Michelle Obama “trash” on a network interview last week.

However, once we exclude the “drug addled gas bag,” the whining “pretty little mama’s boy,” and the ultra pious, self-appointed, "stalwart defender of The Church," we are still left with some unsettling whimpers arising from unexpected quarters -- quarters we had always previously assumed to be more rational.

There are comments that Treasury Secretary Tim Geithner and Director of the White House's National Economic Council, Larry Summers, should be fired for lack of purity and effectiveness. That would be “lack of purity” from having been a Fed Bank President during the Bush bailout in Geithner’s case and from having been a Clinton advisor in Summers’ case, that would have been before he was President of Harvard University. All these comments can be immediately discharged because they are founded on the premise that what we are doing right now is, somehow, logically similar to something we have done before. Any hope of that happy serendipity betrays a frenzied dash for the refuge of history, hardly a behavior we would expect from the brave knights we have sent to kill the dragon.

The Treasury Secretary is a frighteningly intelligent man who has been seriously cautioned by the Obama White House to try to “de-accelerate” his speech enough so it can be captured on an ordinary, modern video camera during his interviews. Naturally, neo-cons -- being allergic to leadership of any type thanks to their toxic, soul consuming cynicism -- are quite uncomfortable with a man who constantly needs to concentrate on speaking more slowly so the rest of us can possibly follow him. Neo-cons like slow drawls so Southern that most Americans either won’t listen to them or can’t understand what is said. You know, ... southern ... coach ... pastor ... You know.

But some modern liberal pundits seem to be put off because they can’t understand it either. They think that the reason they can’t understand it is because what Geithner is saying isn’t even remotely similar to anything they have heard before, the lingering, predictably desperate test of validity for those who have found themselves unable to think. The most limited, self promoted, modern progressives don’t believe that anything can be progressive now if it hasn’t already been progressive before. Those talkative folks identify themselves by providing endless explanations of exactly who was at fault for almost everything that threatens their pretend, historical, progressive "status quo."

But this post is all about having a chit chat with Republicans. There are actually a few of them still visible who are so inebriated on the Kool Aid and so head strong that they continue to claim a tiny, forgotten patch of Bush Jr.’s, medieval fear mongering “high ground.”

If you have had a creepy, out of focus feeling while talking to these Republicans and other aging reactionaries about Obama’s plan, don’t blame yourself! The person standing before you in those conversations isn’t actually saying anything. What you are hearing are talking points! The actual words being uttered in such conversations have been “piped” down to eager repeaters by their “thought masters,” repeaters who, when considered generously, have nothing else to say besides more road weary talking points about the Stimulus Package, Socialism, abortion, gun control -- well, you already know the list of topics they prefer.

On to the water cooler.

Although MeanMesa usually avoids inserted diagrams and charts, please consider this following exception. Perhaps we can spend just a minute with this National Debt record as an introduction to a few points which might “flesh out” your conversational repartees. 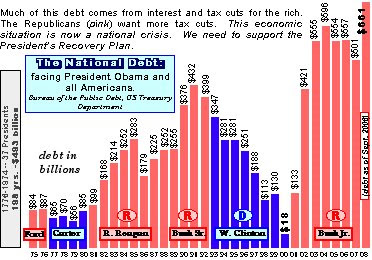 click to enlarge
The large block of red at the far right of the diagram is an estimate of the accumulated deficit of the Bush Jr. autocracy. Politically unpopular spending such as the war in Iraq is, of course, omitted. However, the total of the eight year deficit since the Supreme Court appointed Bush Jr. amounts to roughly three trillion dollars. What might have been a rather lack luster disaster was converted into the present calamity by two large tax cuts which directed vast windfalls to the very richest Americans, and the utterly outrageous PHARMA written Medicaid Prescription Drug Plan, designed to channel boat loads of tax money to the “pill masters” of the pharmaceutical lobbyists. The PHARMA bill was passed at 3 AM in the House. The tie vote in the Senate was broken when the Vice President Pretender voted in favor.

An often overlooked aspect of the trillions which disappeared into pockets of Bush cronies has to do with the rest of the economy, you know, the part where we live. After the extraction, that sudden, purloined flatulence among the rich and mischievous found itself stranded with nowhere to go. When we speak of financial instruments such as securitized toxic mortgages, incredibly leveraged, shadow assets on the profit and loss books of all the investment banks we are presently rescuing, and other Wall Street Casino speculative doodads, we see the “new home” all these suddenly wealthy “businessmen” found for their less than legitimate good fortune.

What might have been expected as “risks” associated with such a move were gleefully buried under the cover of a dysfunctional Justice Department, a conveniently blind Security Exchange Commission (Remember Madoff? Enron?), ruthless gangs of well paid Federal Appointees and an overly protective Executive (Autocrat) who had already hit his management high point bankrupting professional ball teams and oil companies his father gave him.

The Independent Senator from Vermont noted this unusual development:
Not everyone has had a hard time during the Bush years: “The top 400 richest Americans have seen their personal wealth increase by $630,000,000,000 - $630 BILLION - since George W. Bush was appointed President by the Supreme Court in 2000.” (Sen. Bernie Sanders, Sept. 18, 2008)

The point? When this much of the economy’s liquid money was effectively removed, it caused a bit of a shortage. After that initial insult to the economy, when the reckless schemes which had absorbed all these dollars fell apart, it created even more of a shortage. The spending which normally fuels the US economy ground to a halt. No one had any money, and no one could borrow any.

Yes, of course, all these “genius investors” immediately started bellowing for a bail out from the Bush Jr. -- Paulson crime family, but they were able to loot only a paltry $350 billion before their sponsoring syndicate was run out of Washington. That left them hungry for more. Their eyes, naturally, turned greedily toward the Obama Stimulus Plan. If that legislation could be converted to even more tax cuts, then looted as it straggled through the Congress, they could be made whole by the tax payers, a veritable wet dream for any self-respecting neo-con.

The Obama plan replaces all that “missing” spending with Federal spending. It is clear that such a bold move is probably the only chance still on the table to avoid a repeat of the World Wide Great Depression of the FDR days. The amount of spending in that spending bill is, unhappily, astronomical. That would make it roughly the same size as the take that Bush Jr.’s fellow looters snatched during the eight years when frenzied high crimes were the constant currency of the day. The economy was supposed to tank after the Bush crime family was safely back in Texas, just in time to blame Obama for everything, but, as is usually the case for everything Bush Jr. dreamed up, it exploded prematurely.

When your Republican starts off with complaints about too much spending and out of control deficits, show him the chart. Agree with him -- in a condescending way -- that it really is too much spending and that the deficit it will cause really is too high. Tell him -- compassionately -- that we have already paid off the neo-con extortionists once while they were gang raping us the first time, but that we are willing to pay again to save the country.

For a comprehensive explanation of the contents of the 2009 Stimulus Bill,
http://en.wikipedia.org/wiki/American_Recovery_and_Reinvestment_Act_of_2009
and for an overview of the President's 2010 Budget, submitted to Congres in 2009,
http://www.gpoaccess.gov/usbudget/
Posted by Chad H at 8:54 PM