Welcome to the E.O.B.
A "real life" example of a health care question. A huge part of health care reform will be the removal of everything which has been added by the special interests who have designed and legislated every part of what we now have. The switch will be legislation which directs health care at health instead of profits.98

A MeanMesa post about healthcare could easily extend to far too many inches -- and even that approach would still omit many important facts! So, in an effort to keep this short, let’s just say that we won’t mince words.

In order to get right to the point, let’s take a look at the illustration included here. This is a monthly report from Presbyterian Senior Care in Albuquerque, New Mexico. A similar form is mailed to the author of this blog every month. ( Just click for an enlarged image.) 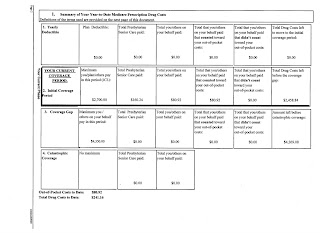 When we look very carefully at exactly what this form says, we can get a glimpse of one aspect of the Medicare Part D Pharmaceutical Coverage as it was written by the pharmaceutical lobbyists when it was passed during the Bush Autocracy. Taking a look at the actual results of the program in action can, hopefully, reveal far more than abstract analysis offered by media pundits. What we will examine here is the reality of what Americans using Medicare Part D encounter across our nation.

The cover letter accompanying this little jewel describes it as an: E.O.B.,
an Explanation of Benefits for Your Medicare Prescription Drug Coverage (Part D).
THIS IS NOT A BILL. Keep this notice for your records.
This notice includes:
1. How much you’ve paid so far this year for your prescriptions.
2. Your recent claims for prescriptions.

Now, to the information on the form.

The second box shows the maximum allowed drug costs for the period, $2700.

The third box as we move along this row is the amount actually paid by the insurer, in this case, Presbyterian Senior Care, $160.24. This figure represents the cost of my prescriptions paid for by Presbyterian Senior Care, an HMO which handles my Medicare Part D coverage. This $160.24 is the part of the cost of these prescriptions other than the co-payments I made when they were purchased.

The fourth box shows the figure $80.92. This amount is the total of the co-payments.

Now, it gets a little more interesting. The fifth box shows the figure $80.92 again. This time that amount is described as the amount “you/others on your behalf paid that counted toward your out of pocket expenses.” This means that this $80.92, although not paid by the insurer, is still counted toward the $2700 limit of “this phase” of coverage.

The “Coverage Gap,” that is, when total prescription costs have reached $2700 (based on the way they calculate this in Row 2) and gone on until they have reached $4350, means that there is no Part D coverage for this “period” or "phase." Part D becomes active again only after prescription costs have passed $4350, and is then called “Catastrophic Coverage.” Row 4 describes the features of this part of the program.

Relax. All the math is finished.

Now, what exactly is the point? To illustrate “the point,” let’s compare it to a different example of common insurance, say, auto insurance.

When we have a car wreck, our insurance company comes to the rescue. Our policy describes precisely what our insurance covers, and also states very clearly that there are limits on various possible costs resulting from a car wreck. For example, even if you were "drunk as a skunk" and collided with a bus full of orphans from a home supported entirely by trial lawyers, your insurance company would not be willing to pay a trillion dollar settlement.

A trillion dollars would be far more than the limit of liability your policy contains for that sort of accident. The idea of clearly stating the “maximum coverage” provided by your auto insurance policy is a completely standard practice of that type of contract. “Maximum coverage” or “liability limit” simply spell out just how much you have contracted your insurance company to pay. If you had wanted them to pay more, you could have purchased a contract with a higher “liability limit” for a higher premium.

However, if we were to insinuate the Medicare Part D coverage structure into this auto policy, we would arrive at a bewildering conundrum. The “liability limit” on such a policy would include not only the total amount the insurance company might possibly have to pay, but it would also include everything you might pay out of your own pocket! This means that if you had to add any of your own money to the amount finally paid to the orphans, your insurance company would consider that to be a part of what they paid!

In this version of auto insurance, anything you paid would count against your “liability limit” in just the same way as if your insurance company had paid it!

If auto insurers could sell this kind of policy, they would love all the extra money they would earn settling such claims! Unhappily for them, no driver in his right mind would ever purchase a contract like this one. If such a policy were ever offered, drivers shopping for insurance would immediately be on the phone to a different company.

However, with the “special attention” the pharmaceutical lobbyists paid to writing the Part D legislation, the equivalent of this “crazy auto insurance company” turns out to be the only insurer in the market for millions of Americans. Aside from passing the thing at 3 o’clock in the morning in the House and aside from the fact that they had to rely on good old Dick Cheney to break the tie in the Senate, this Part D bill was absolutely “chuck full” of legislative “doo-dads” which guaranteed its pharmaceutical sponsors some outrageously huge profits. And, as of now, those PHARMA sponsors have been doing, well, just great!

It was just the end of one of those binge "looting" parties that George Bush liked the very most. If all of his lobbyist friends were “snorting” and “cavorting” when he signed it into law, he figured that he had done his work very well.

Some of those “doo-dads” have already turned into billions of dollars in profit to the pharmaceutical companies and billions of dollars worth of fraudulent extortion costs for Medicare For example, unlike our auto insurance analogy, there is, by law, absolutely no competition or negotiation allowed. The price tag the pharmaceutical companies stick on any prescription is the price which will be paid under Part D. Period. No Americans will be allowed to go to Canada and purchase the same prescription for a lower price because “it simply isn’t safe for our elder citizens.” Right. They need to buy those prescriptions here where the full price can be charged to be safe!

Gotta' take care of the old people -- and, of course, the pharmaceutical corporations.

Under this weird legislation, even if old people did illegally go to Canada and paid for their prescriptions out of their own pockets, Medicare Part D would consider any money they spent this way to count against their “coverage.” It would appear in Row 2 of our form as an addition to the figures in box four and box five.

All of this "special" accounting might be no more than another Federal policy fluke, except...
When neo-cons are busy "proving" that "we can't afford health care reform," they are using a rather deceptive number to calculate that cost! The figures which are derived as the "cost of the program" are NOT BASED on the amounts that Medicare will pay for covered prescriptions. Instead, those numbers include all the amounts that ANYBODY PAYS for prescriptions. They include the amount that Part D will pay, but they also include the part that individuals will pay in co-payments and for drugs not included on the Part D formulary! Or in Canada! They even include the amount of coupons given by drug companies to lower the price of their own prescriptions!

Snakey. But, what did we expect?

The following e-mail arrived in my computer from the “Organizing for America” folks:

We knew healthcare reform would face fierce opposition -- and it's begun. As we speak, the same people behind the notorious "swift boat" ads of 2004 are already pumping millions of dollars into deceptive television ads. Their plan is simple: torpedo healthcare reform before it sees the light of day by scaring the public and distorting the President's approach.

When the swift boaters flood the airwaves with distortions, we'll flood the streets with volunteers armed with facts. When they send lobbyists to tell Congress to back down, we'll send millions of calls, letters, and stories from real Americans asking them to stand up.

At the very bottom, Bottom Line of all this mischief, health care outcomes in the United States, although the most expensive in the world, are some of the worst in modern developed countries. In most European systems, it is illegal for a for-profit health insurer to even insure primary care.

Yuck. These American parasites seem to have a "thousand mouths."

I hope MeanMesa visitors will remember just how crazy this “gang rape” legislation actually is.

They should remember. They are paying for it, like it or not.

For an account of the scandal of the PHARMA Bill's passage:

and, straight from the Social Security Administration, a compilation of Part D: