60 Votes, Senate Cloture & “The Theory of Everything”

The Fundamental Equation of the Senate.
No, not The Law of Thermodynamics, the "The Theory of Everything!" It explains, well, Everything. 103
Much has been said about the outrage of an elected Senate which seems so nonchalant, untroubled, unembarrassed and unabashed as it continues to savage health care, climate change, education resources, Supreme Court Nominations, darn, as it continues to savage everything! The deliberating body has turned into an unappetizing mix of a whore house and a nightmare circus.

Obama knows this from his first hand experience with these “bought and sold” crackers. He had a job there for a while. However, some MeanMesa visitors may not have a firm grip on exactly what is going on as we sit and watch unbelievable scandal after unbelievable scandal. Rather than dive into the abyss of any specific insult, MeanMesa will attempt an abbreviated explanation of “standard operating procedure” in the U. S. Senate as it is apparently being applied to every bill presented there.

The provocateurs are world wide experts at their trade. Their profession is a balancing act between two extremely lucrative tensions. On one side, the prize is an uninformed, unaware electorate which, when assuaged by the idiocy of sufficiently extravagant campaign investments, will dependably send them back to the “hog trough” term after term, even when doing so is clearly counter to the best interests of almost every voter who will pull the lever. On the other side is the immense wealth which can be had by desanguinating just a trifle of every piece of legislation that will pass before them, that is, "sucking out a little blood, but, just not so much that anyone will notice!" When the price tag on such legislation is in the billions, that “trifle” can be generous enough to fund a new economic dynasty.

This is happening everyday. It is a bad habit these crooks picked up during the autocracy.

The other moment to observe them in action comes when one of their corporate cronies suddenly faces the “wrath of daylight,” that is, during those tense moments when such "Captains of Industry" such as the coal lobby or the health insurance corporations suddenly find their avarice exposed by “outrageous fortune,” in this case, a bankrupt electorate which is regaining consciousness and, frankly, infuriated to a blood frenzy. This latter case is roughly what is underway in the Great House on Capitol Hill as this posting is being written.

All the lecherous Senate monkeys the ultra-rich have previously purchased to protect their extraction games have been called to defend “free enterprise” or “capitalism” in these moments of peril. Now, that “free enterprise” and “capitalism” is not exactly defined by what one might encounter in a Webster’s Dictionary. No, indeed. These special forms of “free enterprise” and “capitalism,” rather than being what is characterized by hard working, innovative entrepreneurs, amount to decidedly less noble business endeavors which could never actually make a profit left to their own devices, but, when dutifully lubricated by every possible flavor of crooked legislation and de-regulation, turn out to be “roses, simply roses!”

The following diagram might be similar to something which might appear in a “Beginner’s How To Pamphlet” for a new Senator. It explains, in a very basic way, just what will be expected and required for a prosperous incumbency. 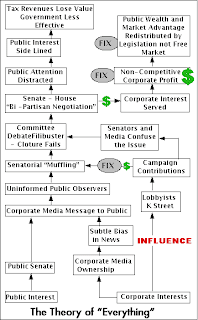 The diagram is self-explanatory to anyone who has been “confused” by the news accounts of what has been happening in the Senate. Further, it represents both a useful contextual reference which can be cited in future MeanMesa postings and a simplified sort of “flow chart” which might assist in understanding why public opinion means so little and ideology means so much.

Try it out! The next time -- which will probably be tomorrow, the way things are going -- the news from the Senate becomes incomprehensible compared to what you learned in that old civics text, just take a look at the diagram. You will probably be able to point a finger at exactly which stage of the looting the thieves are working on at the moment.