The "30 day" Filibuster and Other Dinosaurs from a Happier Past

What is it about politicians from Connecticut? Gosh, aside from being "home base" for a big bunch of health insurance gangsters, it always seemed to be a nice place.

Will Chanukah become Easter for the Bush Jr. Wanna-be? Egad! Maybe Lieberman, resurrected yet one more time as a health care obstructionist, should move to Texas, pretend to be a cowboy, get a hat and a cow and pretend to "fit in."

MeanMesa visits "Old Joe" Lieberman in a Past Life

Ah, 1994. What a year! MeanMesa can remember that old year. The world was very different then. Some of the people were different then, too.

To date this story, we can note a few historical events which were unfolding fifteen years ago, We can make a few quick comments about folks who were running things. What they were saying. What they were doing.

The Serbians, led by a few fellows who are now waltzing with cranky war crimes judges at the Hague, were violently shelling the largely undefended city of Sarajevo. The Rwandan Hutus and Tootsis were massacring each other in what turned out to be a historical genocidal slaughter. O.J. was arrested for the murder of his wife. Nelson Mandela, finally freed from an apartheid prison, was elected President of South Africa.

The neo-cons were busy, too. Sexually challenged crooks such as Newt Gingrich, Richard Armey and ex-exterminator, Tom DeLay, in the company of some friends who were even stinkier than those three, were cooking up the famous "Contract on America," an early "looting scheme" which would fully materialize after the GOP captured the House of Representatives.

However, sitting there in the back of the room was someone we might have recognized. That would have been "Old Joe" Lieberman. Interestingly, he was promoting a change to the filibuster regulation in the Senate.

Now, however out of character it might seem to a modern day, 2009 MeanMesa visitors, "Old Joe" was actually sponsoring a bill which would have shifted the time limit on filibusters to 30 days maximum. The idea in his old law wasn't all that out of line compared to the seemingly endless string of clap trap he is injecting into the discussion these days.

Now, however out of character it might seem to a modern day, 2009 MeanMesa visitors, "Old Joe" was actually sponsoring a bill which would have shifted the time limit on filibusters to 30 days maximum. The idea in his old law wasn't all that out of line compared to the seemingly endless string of clap trap he is injecting into the discussion these days.

For anyone interested, a simple Google search will turn up all sorts of stories concerning this. Rather than "reinvent the wheel," MeanMesa will post a copy from the Huffington Post here where all can see.

This article is written by Sam Stein, a very engaging Huffington Post reporter. It offers a nice, reasoned account of the entire affair along with a quote of what "Old Joe" said at the time. In the days when these words were news, the Republicans were preparing to take over, paving the way for yet another period of outrageous looting and other regressive forms of dismal mismanagement (the infamous Contract on America).

We must, however, also give "Old Joe" a break on his new loyalties. Connecticut is "full to the gunnels" of remarkably generous health insurance corporations who have been pumping campaign contributions into "Old Joe's" war chest like the Matanuska Glacier on a hot Alaskan day. Further, Mrs. Lieberman turns out to be sitting in a well positioned seat as a major health insurance lobbyist ("lobbyiestta?") raking in untold more thousands of dollars. Between the war chest contributions and the Missus, the Lieberman household is actually now, physically, mentally and spiritually unable to allow health care reform in any but the most toothless form escape "Old Joe's" filibuster threats.

Lieberman In '94: The Filibuster "Ails Washington" And Should Be Eliminated 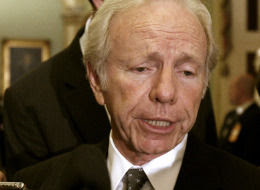 Among Republicans, the Connecticut Independent inspired a round of cheers for another streak of political independence. Among progressives the question being asked is: How could one senator, through threat of filibuster, hold a historic reform process hostage?

It's a question Lieberman himself once asked. And it's a procedural ploy he once lamented.

Fifteen years ago, as a freshman Democrat, Lieberman actually worked to have the filibuster killed. He deemed the parliamentary maneuver "a dinosaur" that had become "a symbol of a lot that ails Washington today." And, in tandem with Sen. Tom Harkin (D-Iowa), he introduced legislation that -- if it had been enacted -- would have made his current opposition to health care absolutely toothless.

After the congressional elections of 1994, in which the power of both chambers switched hands from Democrats to Republicans, Lieberman and Harkin made a rather bold move. Political obstructionism, the two said, had grown out of hand. And even though Democrats were now in the minority, if the Senate ever wanted to make legislative progress the rules needed to be revamped. On November 22, 1994, the senators held a press conference announcing their intention to drastically water down the power of the filibuster. Lieberman offered the following quotes (which, in today's context, seem utterly out of place for the now Connecticut Independent):

"[People] are fed up -- frustrated and fed up and angry about the way in which our government does not work, about the way in which we come down here and get into a lot of political games and seem to -- partisan tugs of war and forget why we're here, which is to serve the American people. And I think the filibuster has become not only in reality an obstacle to accomplishment here, but it also a symbol of a lot that ails Washington today."

"But I do want to say that the Republicans were not the only perpetrators of filibuster gridlock, there were occasions when Democrats did it as well. And the long and the short of it is that the abuse of the filibuster was bipartisan and so its demise should be bipartisan as well."

"The whole process of individual senators being able to hold up legislation, which in a sense is an extension of the filibuster because the hold has been understood in one way to be a threat to filibuster -- it's just unfair."

"I'm very proud to be standing here with Tom as two Democrats saying that we're going to begin this fight, because we've just been stung by the filibuster for a period of years, and even though the tables have now turned, it doesn't make it right for us to use this instrument that we so vilified."

(MeanMesa added the text color to the Huffington content. The shade is "manure sienna.")

Lieberman concluded the conference by noting that his effort was an uphill battle. What he and Harkin wanted to do was to make it so that senators could delay the consideration of legislation, but not inevitably. The Senate would still need 60 votes on the first motion to end debate, (the cloture vote). But the next motion would require just 57 votes, the third motion 54 votes, and the fourth and final effort would need just 51 votes -- a simple majority. In all, roughly 25 days would elapse between the first and fourth vote.

"There's no question that there's going to be resistance," Lieberman predicted at the time. "I mean, we're asking individual members of the Senate to give up power, but if you give up a little bit of power yourself, you make the whole body more productive and better. And you all gain as a result of that."

But the resistance proved too strong. Lieberman and Harkin got their legislation to a vote. But it died on the Senate floor by a margin of 76 to 19. Every single Republican and a majority of Democrats voted to keep the procedural tool in their pockets, with the chamber's senior Democratic member -- West Virginia's Robert Byrd - leading the way.

"This issue is not going away," Harkin said after the vote.

He was correct. In the 15 years since then, the use of the filibuster has proliferated even further. There were, in 1994, just 39 cloture motions filed on the Senate floor. Last year, that number stood at 139. This year, meanwhile, Lieberman is threatening to add to those totals.

He was correct. In the 15 years since then, the use of the filibuster has proliferated even further. There were, in 1994, just 39 cloture motions filed on the Senate floor. Last year, that number stood at 139. This year, meanwhile, Lieberman is threatening to add to those totals.

"I've told Sen. [Harry] Reid that if the bill stays as it is now I will vote against cloture," the senator said this past week. "I can't see a way in which I could vote for cloture on any bill that contained a creation of a government-operated-run insurance company."

Neither Lieberman nor Harkin's office returned a request for comment. Though, in a bit of irony, the two, have once again been brought together on the question of the appropriate use of a filibuster. Only this time, they're in opposition. On Thursday, Harkin was asked what he thought of Lieberman's threat to torpedo health care reform with a public plan (something Harkin adamantly supports).

"[Lieberman] still wants to be a part of the Democratic Party although he is a registered independent," the HELP Committee chair responded. "He wants to caucus with us and, of course, he enjoys his chairmanship of the [Homeland Security] committee because of the indulgence of the Democratic Caucus. So, I'm sure all of those things will cross his mind before the final vote," he said in a conference call with local reporters.

Of course, "Old Joe" is not the only corrupt Senator intent on protecting his corporate sponsors at all costs, he is simply the most egregious.

Public opinion polls in "Old Joe's" home state of Connecticut show a whopping 70% plus in favor of health care insurance reform. On the other hand, 1/10 of 1% of "Old Joe's" Connecticut constituents are insurance executives -- those would be the ones with the check books.