Climate Change: This Country, This Decade

A MeanMesa "after dinner snack" to quell that post holiday optimism...
As if there weren't enough volumes of climate change prognostications already, MeanMesa has decided that one more couldn't hurt all that much. We'll keep it short.

The national media has not hesitated to show a literal, graphic flood of the more picturesque sides of the matter. There are striking videos of Greenland's glaciers dripping and sliding, polar bears hunting with wet feet and aerial maps of major parts of Antarctica slipping into the South Pacific. There are shocking videos of drought parched livestock corpses and distressed locals across sub-Saharan Africa. However, even so much as a quick glimpse of what we -- here in the United States -- might expect has been a bit lacking.

So, although we don't particularly expect to become listless, desolated desert tribesmen wandering aimlessly through parched wastelands, the actual reality of exactly what sort of impact we might experience here may remain distant, that is, too distant, too comfortably removed. For MeanMesa visitors wishing to really delve into the details of this issue, there is always "Managing Global Warming Solutions," but that paper, posted on this blogspot, is rather comprehensive (and long -- http://meanmesa.blogspot.com/2008/06/managing-global-warming-solutions.html ).

For a shorter view, we can consider the very lightly treated details of this post. Here, we will attempt to hit a few of the highlights of just a bit of exploration of the net. Further, although what is offered can be extraordinarily well documented, laced with massive charts, graphs and extrapolations, we will strive to limit MeanMesa's presentation to just a few more immediate predictions.

All the rest of it is out there for, uh, inquiring minds.

Now, this old planet has experienced some incredible, catastrophic sea level changes in the past. During the Pleistocene period when much of the water which had been in oceans was extracted and frozen into ice caps and massive glaciers, the oceans experienced a sea level lowering of roughly 130 meters. Earlier, what is now the Arctic Ocean actually extended through the center of the United States, separating what are now the east and west coasts. The good news is that we probably don't need to the seriously expect such immense changes any time soon.

However, we should expect some changes. Interestingly, such changes at the coast lines will impact some of the most valuable real estate in the country. Take a look at a map of the United States, paying close attention to just how many major cities -- New York, Los Angeles, Boston, Washington D.C., Seattle, New Orleans, etc. -- are located on coastal regions. 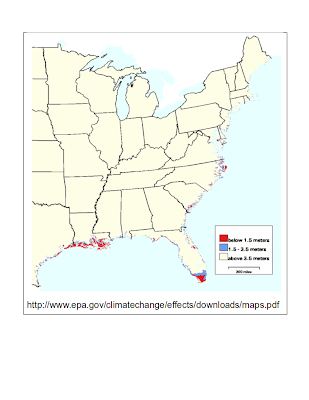 The map in the diagram above shows two conservative scenarios of coastal inundation, one (the red) is the lesser of the two, mapping inundated regions resulting from a sea level rise of 1.5 meters, the other (the blue) shows the same information for a sea level rise of 3.5 meters.

Now, it's pretty easy to say, that little bit of territory doesn't really amount to very much of the whole country at all! So, what's the big deal?

That view of the changes is what we might call a "global outlook." If, on the other hand, we were to take the outlook of a real estate agent, the same view is somewhat different. From that perspective, the land marked by those scrappy little colored areas includes some of the highest priced territory in the country, mansions, estates, ocean front vacation suburbs, not to mention such expensive edifices as well industrialized harbors, warehouses and military bases.

MeanMesa estimates the rough real estate value of such tiny little colored areas at around $1.5 trillion dollars. That would be the amount of real estate equity which will simply vanish under the surf. When we add the replacement costs required to build all new stuff a few miles inland, that figure could easily jump upward to include another $3-4 trillion.

Much of the initial loss would land squarely on rich old Republicans who have had those fancy houses for generations, but an even larger amount would land on local and state governments who would be shilling out massive cash in public projects to mitigate the effects. (Also, note that the map above is really only the southern portion of the eastern coastal areas.)

We have just watched what happens to the national economy when the bankster-gangsters took their $5 trillion dollars worth of unregulated "bubble money." We have heard the President explain how serious is the economic impact of unregulated health insurance gangsters extracting $2-3 trillion per year for their illegal schemes. The unstoppable loss of coastal real estate equity should catch our attention -- even if we live in New Mexico!

The strength of the United States, although certainly the product of all sorts of things, has always rested on the idea that we could produce food here in amounts previously unimaginable in the history of the world. Our agriculture is highly developed. Our national economic prosperity has allowed massive investments in the food industry. Advantages such as irrigation, fertilizer, pretty good weather and lots of room for crops have provided us with plenty of cheap food through our entire history.

We not only eat well -- and cheaply -- here at home, we have found that all those full grain silos offer us an ability to extend our political influence around the world with rather painless aid projects where millions of tons of grain and other commodities can be sent to those in need. Especially if we like them, or wish for them to like us. (Or, of course, if they have more oil and less food than they need at the moment.)

Well, that food production success has depended heavily on the kind of weather we have in our crop growing regions. Especially, how much annual rain we have there. We have to accept the idea that our "food growing weather" is very likely to change in the coming decade. 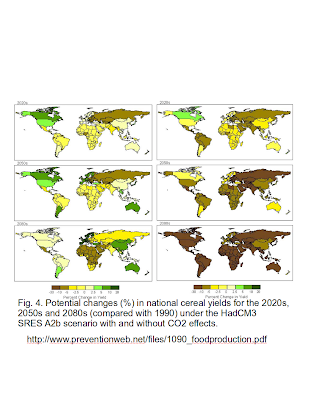 The map in the diagram above actually represents a sort of middle of the road assessment of what this might look like. (If you visit the link, you will see seven different, alternate scenarios -- some worse and some better...)

Of course, we look first at the effects of the CO2 increases on food production in our own country. For the "graphically challenged," green is good and brown is bad. We see that the main food production areas of the United States, that is, roughly the center third, will experience a production decline beginning in the next decade. Given the astonishing amounts of "extra ingredients" we habitually add to all of our food, we will, at first, probably replace a lot of the diminishing food production with "extras" such as preservatives, fillers, "extra fiber" and the like.

However, although we like to limit this discussion to abstractions such as CO2 levels, coastal inundation and food production, MeanMesa visitors can probably not avoid noticing that major parts of the rest of the world will be developing a serious "brown" condition. The "Managing Global Warming" approach characterizes this as a Malthusian Correction.

It suggests that the planetary population, facing grave food and water shortages, will "adjust" from the current seven billion to around five billion folks. (Uh, two billion of the remaining five billion will still be desperately hungry and thirsty, and, at least in the beginning of the "adjustment," they will be buying rifles, not food.) Here in the United States (remember, the W done told us thet our oceans no longer pertect us...), not only will your grandchildren be less obese, they will probably become nice, healthy, skinny soldiers. Although this unpleasant prediction will be a few years in the making, our apparent comfort of facing it with a dysfunctional government is beginning now.

Our glum predictions and protestations over frivolous matters such as NAFTA will become nothing more than memories of a better past. With the retraction in planetary prosperity -- including ours -- our "climate changed winters" will find fewer and fewer Chilean grapes buzzing into our country in the bellies of giant cargo jets. The South and Central American "brown" problem will become dangerously severe in a couple of decades.

Of course there will be major changes in the import export business -- and one not limited to the flow of food. MeanMesa suspects that the U.S. export of military (you know, crowd control...) equipment will increase as the import of seasonally adjusted food stuffs decreases.

It is probably a good time to introduce a generalized form of the social impacts of decreasing food production -- whether import export or not. It begins with increasing prices. Those lead to a sort of background, steady state hunger. That condition precipitates political unrest. From a frustrated, hungry point of view, political correction becomes oriented toward extreme forms of "getting even" with those who are causing the hunger. Bad choices will be made, and conditions will get worse. Within no time at all, the country will drift into a chaotic nightmare energized by desperate, hungry people looking for solutions which no longer exist for them.

We can assume that, no matter what changes have been imposed on our diets here at home, the ideas which presently inspire terrorists will be replaced with some serious jealousy about food. We will have some. They won't. Immigration problems will explode.

We will probably look back upon the current energy debacle as "the good old days." Of course, our air conditioning requirements will increase with the changes in climate. From the evidence we have seen so far with respect to unusually severe winters, our heating bills will probably also go higher. Energy prices will ascend to meet the shortages.

There will almost certainly be significantly less travel, and that includes everything that uses energy -- especially cars and airplanes. We will most likely drift toward an increased reliance on railroads and the transportation energy efficiency they offer. Public transportation will grow more and more popular.

The reduction of the "luxurious" surplus of money and fuel we now enjoy will impact the rate of political possibilities for environmental corrections. What is currently a "snit fight" of ideology between ecologists and coal mine owners will become too expensive for a continuing dispute. Progress with such issues as CO2 emissions, pollution and irresponsible resource extraction processes will become too expensive to continue at even their present "snail's pace."

Under the onslaught of the waves of desperate, illegal immigration and the descending global economic conditions, we can anticipate increases in police enforcement costs, use of National Guard resources for environmental catastrophes and the scope of social "safety net" costs. International conditions will, most likely, result in higher military expenses and larger numbers of citizens being moved from productive domestic labor forces to military assignments.

All such developments will impact the amount of tax dollars available to mitigate domestic climate impacts, and redirecting tax dollars will, inevitably, change the social expectations of the country.

In our current state of ideological division, we see the government of the United States in a gravely dysfunctional state. The separation between the public will and the special interests has left the body in a state of indecision and serious distrust. Even the most popular ideas meet incredible obstacles when it comes time to act on them with federal clout.

Many -- or, at least, some -- of the difficulties mentioned in this post could be solved or mitigated by no more than the simplest governmental commitment. However, MeanMesa sees the United States government paralyzed by the carefully crafted ideological divides which have recently grown to a national security concern. The idea of using our collective will and resources -- through the lens of an effective democratic government -- to solve our problems and face our challenges is fading. Even the expectation of that happening is fading.

Our best tool for facing our collective problems grows more and more dull by the day. If we would chose not to go to work on climate change, perhaps we could still go to work on the government.