The Details of the Stimulus "Failure"

MeanMesa received the following note from David Plouffe (pronounced "pl aof "), recently the head of President Obama's campaign team.  He has now moved to a much more effective position working for the progressive candidates in the 2010 mid-term elections.  The following letter was sent by the OFA.  MeanMesa thought visitors not on the OFA mailing list might like to take a look at it.
By the way, why aren't MeanMesa visitors on the OFA mailing list?
The letter:
Chad --

Wondering what the American Recovery and Reinvestment Act -- President Obama's stimulus bill -- has accomplished? Look at this:

(A note from MeanMesa -- you really have to click on this baby to see the whole thing!)
One year ago tomorrow, after tens of thousands of you shared stories and called your representatives, the President signed the American Recovery and Reinvestment Act.

And while this anniversary isn't a cause for celebration, there is reason to be optimistic. This chart makes it clear: We're on the road to recovery.

Still, we know there is a long way to go. Many Americans are still struggling, and creating jobs remains President Obama's top priority.

Click here to learn more about the President's record on the economy, what we're doing to put more Americans back to work, and get easy-to-share information you can pass on to friends and family:

Thanks for making change happen,

David Plouffe
At this point, we will refresh all the eager bar chart viewers with bar chart from a previous MeanMesa post.  Yes, another bar chart. 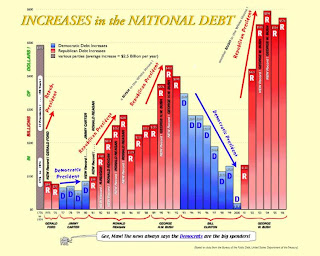 This chart, of course, deals with the money totals of the national debt.  If one wishes, this can be inverted, then compared to the OFA "Jobs" chart.  During the W's autocracy, not only was the treasury being looted by the neo-cons (Yup, the same ones who are now bitching about deficits... Most of the Republicans now doing all the whining were like  mindless zombies, very busy voting "yes" on all that debt.) but, predictably, job losses unavoidably followed.  On the OFA "Jobs" chart, the autocrat's interest in doing anything for "Main Street" -- like trying to stop the plummeting employment numbers -- were entirely neglected.
"Durn, is et ever hard t' fahnd tahm fer stuff lahk thet when thur's, ya' know, lootin' to be done!"

To update the "looting" report, two very snakey Senators, Max Baucus (D[?]- Montana) and Chuck Grassley (R-Iowa) groomed what was presented as a "bi-partisan" jobs bill in the Senate.  Now, MeanMesa can remind all visitors -- as evidenced in the first chart above -- Republicans are allergic to actual jobs bills dues to a tragic genetic defect.  Senator Baucus, infamous for heading the Finance Committee which produced the Senate Health Care Bill (also known as the Senate Wealth Care Bill for health insurance corporations...) reached across the aisle to birth this thing.

Naturally, to make the thing a little more "palatable" to the looters, certain, well, uh, pork had to be added.  The exact recipe called for 10% of the bill's cost to be TOTALLY DEDICATED to job creation and 90% to be either out right pork or a tasty Senate pork flavored substitute ingredient available only at the room temperature "day old counter" of WalMart.

The Senate:  Where dreams go to die.

The looting was so outrageous that, although Senator Reid would have eagerly agreed to contributing to a testicle implant program to get a bi-partisan anything through the paralyzed Senate, he killed it, saying that it would be simply too embarrassing to let it pass.

Thank you, Republicans.  All of us here, staggering under the economic train wreck you left when you were through last time, realize that your politics trumps our need for food on the table.  Egad! What were we thinking?