Our country's infatuation with considering education -- especially when gauging it with respect to its success and failures -- as a measure of its competitiveness in innovation, technology and other economic drivers may have left something very important "out of the equation."  Philosophically, such neglect or omission sounds  a "tone" of its own, albeit perhaps a rather abstract tone.

Sooner or later Americans will arrive again at the inescapable conclusion that although what one can do because he has been educated has an immediate importance, what one will be stands to shape the future of our nation just as profoundly.

In the short term -- the time span always favored by "bite and grab" neo-cons -- inventions and efficiencies seem to be the whole body of the "life's blood" coursing through the veins of our country and culture.  However, more reasonable folks understand that, while such things are, indeed, important, the future will be a profile of the quality of citizens who live here, vote here and direct American society, that is, a profile of the essence of the American people.

Of course, such a claim must be very cautious not to imply that the essence of Americans will emerge as a quiet, cooperative, orderly almalgam of ideologues marching forward in lock step style uniformity.  That, again, would be suspicious akin to the neo-con approach where every issue is always politics and the only choice for a response is, too often, to simply dig-in one's heels, predict calamity and incite fear of change.

So, from what well will these American citizens spring?

There can be little question that they will, as is the case with all young humans, develop under the influence of a wide variety of encounters.  They will be products of their own childhoods and upbringing.  They will be influenced by the fundamental values of their parents, churches, coaches and pastors.  The events transpiring during those parts of life when they are aware of events transpiring will, unavoidably, influence their outlooks as adults -- as citizens.

The final product, that is, the nature of the citizen who will ultimately reconcile all these disparate experiences, will be an alloy formed from all sorts of things, many of which will present contradictions to other things. Decisions will be made.  Personalities will be formed.  Intuition and suspicion will each enjoy their own place in the mix.

Now, to the topic.

A dominant influence in the outcome of this maturational journey will arise from the education of this man and this citizen.  (Of course, girls also become women and citizens...)  All those topics and subjects which might have seemed  somewhat irrelevant as a young student gazed from a classroom window to the fresh air of springtime or considered an upcoming party grow legs -- perhaps better said, grow roots.

In a myriad cacophony of hardly perceivable routes, the fundamental education a student receives will contribute to the foundation of his adulthood.  The underpinnings which will define the adult and the citizen are hard to determine as absolute specifics when considering what thoughts and knowledge lay at the base of his ideas at any given moment, but they are there.

Should anyone wish to dispute such an argument, just let him begin to extract the educational contributions from one of his complex thoughts.  An opinion on the Afghan War might hold particles of a past study of Alexander the Great.  An interest in agricultural subsidies might rely on a recollection of the agricultural beginning of the ancient Sumerian Empires.  A position on some piece of current legislation winding its way through the Congress might be derived from studying the Jim Crow period or accounts of labor disputes from the past.

There is not -- nor should there be -- a "knee jerk path" from some classroom topic encountered in one's youth to some feature of one's adulthood -- and citizenship.  Whether that class was sex education or civics, home economics or psychology, geology or mathematics, every moment spent in a public education classroom is an investment which will determine the quality of the citizen who will be formed by it.

Does anyone think that we, as a nation and a culture, can sustain our collective essence with uneducated, supercilious ninnies? 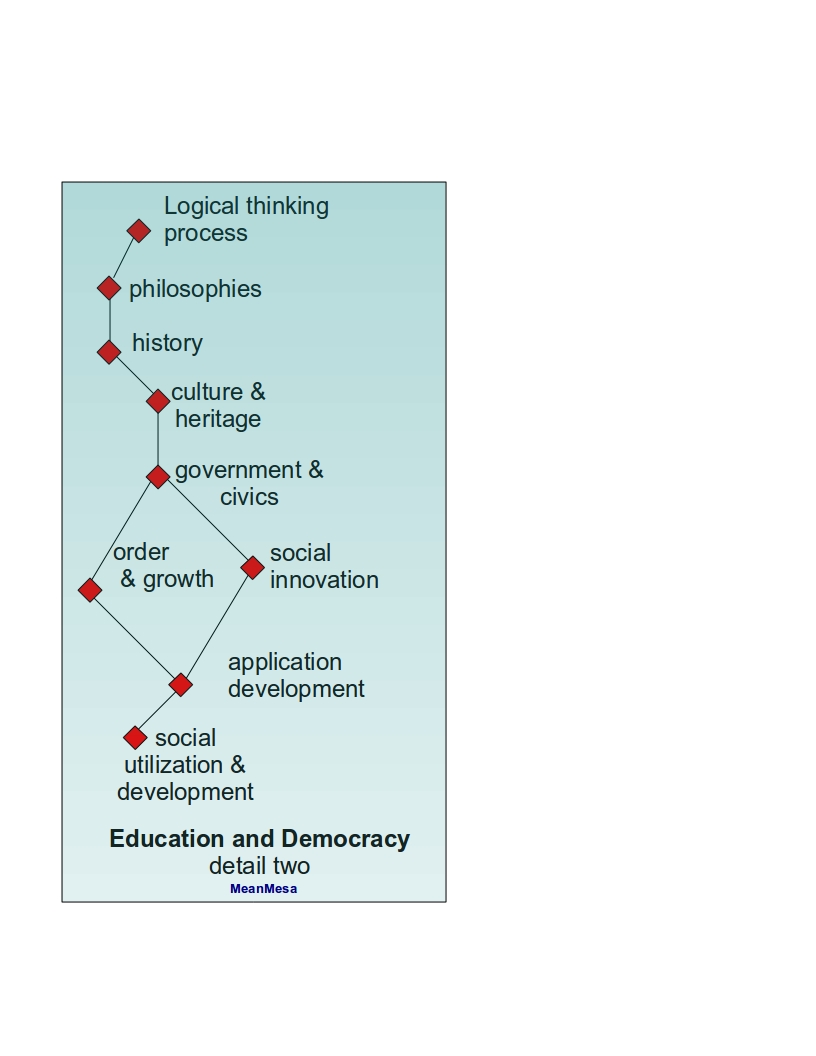 An education system which focuses only on what commercial abilities might be inculcated into the youth of our country is sterile and suffocating, not to mention insufferably boring.  Further, this complaint of being "boring" not only fits well in respect to what occurs in the classrooms where this is the primary direction, but also in the citizens such a system will create as it staggers forward.

America has always needed dynamic, well-rounded, interested, interesting, well educated citizens, not simply better prepared "wage slaves," uninformed ideologues who vote as they are told or mindless soldiers who are unable to understand why they are asked to fight.

Just now, as the nation is rightfully flabbergasted at the pitiable state of our public education system's products, we see the crisis of 18 year old Junior High students who read as if they were third graders.  Of course, recoiling from such a realization, we a worried about what the future might hold as these  texting video game players begin to compete with the 300,000 Chinese engineers who graduate every year.

The shock of such a revelation naturally inspires us to a desperate "catch up" mentality, and it probably should.  However, fixing the outrageous defects in what we see today is one thing.  Building a tomorrow which is filled with individuals who have taken a bit of effort to form themselves in some significant way is, unhappily, quite another thing.

It is necessary to understand that we face two challenges.  The first is to educate the young ones for their future competitive, economic survival in a world where our public education system is plummeting to horrible depths of mediocrity and crushing incompetence.  The second, although a bit more abstract but equally critical, is to inspire our nation's students to develop their being to a much high quality, an undertaking which can never succeed in the absence of education.

MeanMesa's compliments to the President for his efforts to reform education.

Stay tuned for even more MeanMesa postings of education reform.