As educational outcomes slip from poor to worse, the country faces a double threat.  On one side, MeanMesa sees the modern version of those "old fashioned civics classes" purloined by the neo-cons who require an uninformed electorate to continue their scheme to convert the nation to a plutocracy.  One the other hand, we Americans are beginning to realize that our past economic prosperity is now being undercut by the production of "graduates" who should be much better at certain things than they actually are.
What "things?"  Which "graduates?"


This post is all about the "tip of the spear" when it comes to the application of our education system's suitability as a foundation for our nation's continued ability to compete.  To plunge directly to the point, MeanMesa will offer up the following conclusion.
The fundamental engine for our continued economic prosperity rests squarely on mathematics and science.

Consider the following diagram which presents an overview of the relation between educational results leading to innovation and invention.  This is a two-tiered challenge.  Recently, the United States has done fairly well in the "innovation" area, but development and manufacturing have consistently moved to overseas economies. This is centrally a result of not having a technology savvy work force ready to move in after the better educated elite innovators have made their technological breakthroughs. 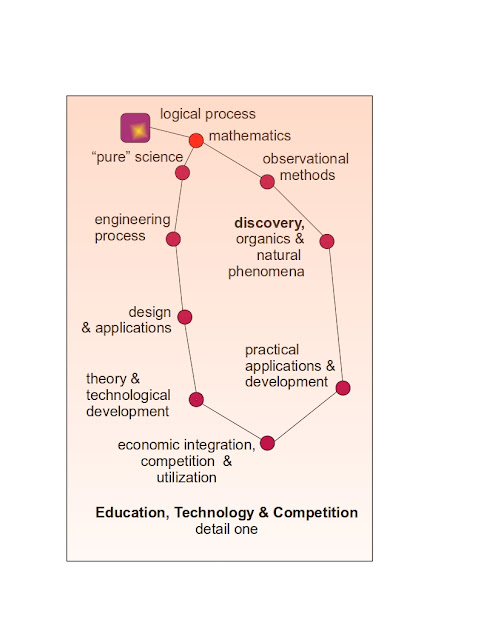 Of course all sorts of other expertise will be required to sustain the day-to-day functions of our culture, but when it comes to the type of innovation and invention which has always served us so well so far, we are slipping to a new, dangerous low point.  Here, we can very comfortably say that  first class doctors, lawyers, stock brokers and bankers and the like are absolutely essential to our modern version of the American dream, but this sort of talent -- when viewed in the cold light of the competition we now face globally -- has much more to do with keeping the country "on the tracks" than with "building the new tracks" our domestic innovators have designed.
And to address the inevitable counter argument, MeanMesa must also happily stipulate that the innovators and discovers at the very "top end" of the American know-how ladder are pretty damned impressive.  These would be the "genius class" of the whole educational spectrum.  It includes the brightest boys and girls from our own country right along with a growing number of also bright boys and girls our corporations are able to import from other places where education is working better than here.
This "top of the ladder" bunch continues to make amazing contributions to the technological base of our nation's economy.
However, MeanMesa sees the trouble brewing in the class just below these "rock stars" of science and math.  To make things work right, the national labor force will require the stars, all right, but just below them it will also require a veritable army of only slightly less notable workers, too -- that is, workers with solid educational backgrounds who, although perhaps not Nobel Prize winning geniuses, are still highly competent technically .
The diminishing membership in this second, less publicized group heralds real trouble for the future of our economy.  Further, the horde of almost illiterate workers now being produced by the failing educational system is rapidly filling this demographic, squeezing what had previously been considered "slightly less accomplished geniuses" upward into critical positions which would have been filled with better candidates before.
As to the question of which graduates are on the receiving end of this dose of MeanMesa frustration, the answer is simple enough.  All of them.
The high school graduates -- at least those who actually graduate -- have been severely "dumbed down" in precisely the areas we are discussing.  The university graduates, in far too many cases, have been able to artfully avoid any serious mathematics and science classes as they rushed through their "required subjects" in order to get "everything" done in time for commencement.
The false hope is that graduates entering these  professional but non-technical labor fields will be able to function quite well without ever soiling themselves with subjects dealing with hard logic and reasoning, you know, stuff like chemistry and physics.  Meanwhile, while the art history and psychology classes are packed, there are plenty of desks open in the calculus classes.
The Impact on the Future Economy
All of this might be very easily dismissed if it were simply another poorly documented case of fear mongering.  However, those of us who are committed to not "hiding from the facts," see this monster oozing out of not exceptionally bad examples of our education system, but rather as oozing out of most parts of it.

The diagram above, generally, traces the lineage of economic prosperity based on creativity within the country.  It is a common and easy mistake to attribute economic progress in matters of invention and innovation only to the last steps in the ladder.  Actually, a far deeper investment in what might be called "technological thinking" is required.

A successful inventor of a new material, for example,  is not successful simply because he has completed the final technology course work directly involved in his invention.  Quietly obscured behind those last, highly directed courses are many others which have focused not so much on the details of this latest innovation, but rather on a broad education about scientific thought, logic and other work which prepared his background for such a success.

The successes which can drive our national economy forward are based on a foundation of other educational work which, when viewed too superficially, might easily appear unnecessary, that is, work which might be painlessly omitted from graduation requirements, for example.  When colleges and universities -- and high schools -- are facing deep budget problems, their administrators may be tempted to take such an action to reduce costs.

When a more complete education track, one which exposes both the foundations and the consequences of each element in a "big picture," is considered, the entire effort becomes critically interrelated and interdependent.  One essential ingredient in educational reform will be adopting the idea that successful educational outcomes have all these unseen foundations.
Posted by Chad H at 12:23 AM