Part One: Meet The Tea Baggers - Who Are They?

Now, MeanMesa has already spent "plenty of typewriter ink" discussing just how important it is to the corporate media frauds to sell every issue as a two-sided "burning question of the day."  Their grotesque inflation of the tiny Tea Bag "movement" to what they feverishly hope will come to be considered a Potent Third Party should not surprise anyone.
After all, it is precisely these same sham artists who encourage unchallenged statements from their Republican Party Masters during interviews -- you know, Senator McChinless screeching out that "Thu 'Merican people has spoke!  They hate this thing!" and the like.
Well, CBS and the New York Times have taken the effort to conduct a fairly rational opinion poll -- one in which Tea Bag opinions have been explored even more fully than they possibly deserve, given their miniscule demographics.  Naturally, MeanMesa, an incredibly objective seeker of all things possibly interesting (Oh, all right.  We can add "for the inquiring mind..."), felt obliged to present their poll's findings.  They are cited here  (below) directly from the report.
However, first, please enjoy an anaesthetic moment of comic relief.  The photo of the autocrat in all his insipid, smiling splendor is provided from the Huffington Post.

George W. Bush is back...in billboard form. Hovering over I-35 near Wyoming, Minn., is an ominous/how'd-anyone-take-him-seriously pic of the former president with the question, "Miss Me Yet?"
There have been no reports as to who is behind the billboard. For all we know Bush put it up after finding a picture of himself as he was about to catch a hamburger at a barbecue. (via NPR)
UPDATE: Morphyne.com is taking credit for the billboard claiming they spent only $1,200 for the ad space. 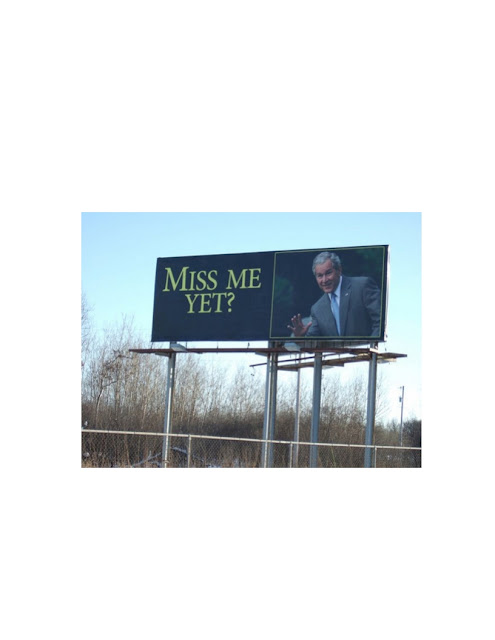 
Read the entire story of the CBS/NYT poll here.

This poll release conforms to the Standards of Disclosure of the National Council on Public Polls.
CBS NEWS/NEW YORK TIMES POLL
The Tea Party Movement
February 5-10, 2010
q11 Do you approve or disapprove of the way Congress is handling its job?

NOTE:  The last portion of the poll presented above has been abbreviated to include only  some of the more interesting responses.  For example, the "q95" notation indicates "question 95."
Please "stay tuned" for Part Two of this series which should be posted very soon.  In the meantime, just consider the prospects of what might happen if this crowd can actually dupe enough "information challenged" voters into electing their candidates.
Thanks for visiting MeanMesa!
Posted by Chad H at 10:31 AM