MeanMesa has watched in morbid fascination as, during the last five decades or so, the most fundamental "goal" of education has gradually migrated, that is, migrated in a fashion which heralds very little promise for an enduring good.
To clarify such a complaint, we can look at the ultimate "aim" implied in our consideration of the benefits of being, well, educated.  In the more classical sense, we see the process as one directed at the development of an individual made possible by the introduction of all sorts of educational information.  In the more troubling, contemporary sense, we see the process as one primarily directed at developing what an individual might be able to do after being educated.
This latter model can offer some compelling attraction to students "suffering" through a long list of required course work in order to get a degree and, more importantly, become successfully competitive with respect to earning a good wage.  However, the same model introduces some unsettling -- and too often, unexamined -- other conclusions which degrade its objective value in subtle ways.
When viewed from this perspective, a "good" education prepares a student to perform some task in society.  That task may require an "educational information background" which is highly complex, that is, a background which requires a great deal of course work as one prepares oneself to competently perform it.  Examples might include a design engineer working for some military aircraft corporation, a brain surgeon, an attorney, or the like.
Unhappily, even when such a student is quite successful in one of these complex "professional" undertakings, his epitaph will almost always begin with some sort of praise about what he "did" in his life.  "He was a brilliant engineer who was central in the development of the X44 system."  "He was an accomplished attorney who spearheaded legal battle to pass the Retroactive Inversion Appraisal Law."
What might be missing in this epitaph is something more than a  few passing "niceties" concerning his life time accomplishments as a vibrant, creative human being.  Undeniably, the X44 Project and the Inversion Appraisal Law were possibly very material contributions to society, but our likely view of their centrality in reflections on a life is suspect.
We may be establishing -- and accepting -- such accomplishments while neglecting what are more fundamental aspects of successful living.  To put it bluntly, our recently departed may have been a Renaissance man, but we insist on focusing primarily on what he has done for us.  This toxic outlook manifests itself in the mistakes we have made concerning exactly "what is important" in our educational system.  Such a reconsideration of what have been promoted as its highest values reveals a significant contradiction. 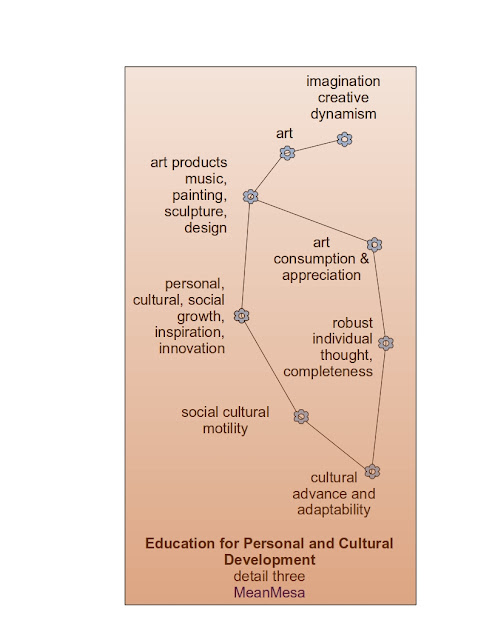 Thanks to the idea that really "good" education will be compensated by money, the features of such a really "good" education have been incorrectly reduced to abilities which can make money.  When a university desires to "toot its own horn" about what a good education it provides, the metric becomes one where the salaries and material successes of its graduates compare favorably with other schools.
Our value structure seems to absolutely exclude any other means of evaluating the essential quality of educations as we compare them.  Further, this is not the result of consistently chosing to evaluate various educations this way -- it is the result of having no alternative of evaluating them any other way.  A good education proves its value and validity by resulting in good salaries.
Could there be something missing here?  Something so fundamental that the general adoption of this bad habit at the exclusion of other, more objective schemes of comparing outcomes of educations, has led us down a "rosy path" to a place where being well educated has come to actually mean the wrong thing?
This conclusion might go a long way in explaining the imponderables we encounter as we consider what changes educational reform might need to take.
Ooops.  A Modified World View
Just to present the paradox in concrete terms, let's simplify the dichotomy to a couple of opposing "one liners."
On one side we find the Renaissance Man.  He has been educated broadly with the goal of developing into as much of a fully informed human as possible.  This will mean that, during his student career, he has been free to pursue most of the topics which were of the greatest interest to him.  In this case, we have to stipulate that many of these fascinating courses will provide little direct advantage to the likelihood of his post-educational salary being greater.
Further, we can offer a bit of a reassuring caveat here, also.  This wide open curriculum he has sought out during his education is not one based on which classes would require the least effort on his part.  Instead, his scholastic records would reflect a profile of his varied personal interests.  Otherwise, his post-education prospects would be a contest decided by the the artificial interests he might have been coerced to adopt by some university's graduation requirements.


The quality of the future life of a Renaissance Man will be based on the nature of his curiosity and interests.  The quality of the alternative where the man marches "lock step" through predetermined "interests" specified externally to him will be based on the nature of that "external influence."  Renaissance Men are willing to bet on their individual selves.  Lesser men are only willing to bet on the administrators of their schools.

He would view his selection as one which reflected material he considered necessary for his development into, well, what he wanted to develop into.  He would have studied topics which he considered to be an essential for his understanding of everything he was intent upon understanding.
Right away we can see the criticism of such a system.  First, when educated in this fashion, he might not make a large salary.  Second, if such an education does not lead him to "comparative educational successes," there will be no one to blame.  He will be responsible for the consequences of "holding true" to his own, individual interests, but encountering those consequences will not be a metric to judge the education he has accomplished so much as a metric to evaluate the future value of  his interests.
There also, at this point, looms the widely held, social misconception that his education should have transformed him into something, that is, something carefully codifed by those who have authorized themselves to define what he should have been interested in all along.  In fact, these voices will lament the prospect of his becoming, thanks to this individually selected education, more vibrantly what he wanted to be as opposed to what they thought he should be.
Egad.  What a disaster.  What might have been a finely honed expert at something or other has turned out to be a well rounded individual who has accomplished an education directed by his personal interests -- his essence.  How can society expect to run its factories or its armies with educational products like that?
On the other hand, we see the successfully educated technocrat.  Now, MeanMesa does not use that term derisively.  Such educational products can be explicitly vindicated.  A graduate educated in this fashion has studied every sort of detail known about successfully performing some complicated necessity of modern, pragmatic economic technology.
However, quite beyond the negative implications of pursing educational topics defined by someone else -- even when they have been shown to produce very dependable, desirable competitive results with respect to economic measurement -- the social model will characterize this sort of highly defined effort as being a "good" education.  The idea is that exclusively this educational product will fill the needs of a complex economy.
Not much thought is reserved for the inner man sitting at that desk in the law firm, brokerage or engineering office.  Will he be destined to extract the satisfaction for his path of development from the suit and tie, his community standing and his pay check.
Should all that remain somehow mysteriously unsatisfying for him as he considers his life, he can always become an "active church member" or some other superficial nonsense.
The descent of one's being, when neglected long enough, becomes utterly miserable, not to mention sordidly irreparable.  A vibrant, productive culture is not populated strictly by the clever or the well trained.  Sooner or later, we will conclude that it will be squarely measured by how many of its participants are happy and satisfied.
An Even Larger World View
We can see education directed to providing the complex services required for a society as one which, well, serves it.  In such a model, the whole culture is streaming along just "over there," and anyone who seeks an education directed to serving it is intimately defined by its externality.
There may well be small innovations which will enhance the flow of this external stream, but they will be increments designed with the ambition of stabilizing, expanding or accelerating its flow.  Soon enough, the successful in such a culture are successful because they can add to that external flow, not because they  direct it in a way which is consistent with their developed being.
In no time, we see the "Captains of Our Culture" becoming its servants, and, by the way, generally not very well adapted servants, either.  The value of self-growth is discharged as a possible educational product in favor of feeding the flow of the established culture.  The established flow of matters will decide which lives have value -- they will be the lives which have in some way enhanced the flow of the culture not individually satisfying lives which have completed and fulfilled themselves.

For a while, this may seem to be a very rational approach to the assignment of educational priorities, but such a system will inevitably atrophy from the vacuum of real being resulting from the failing individuality of those synthetic labors which at first seemed to be so desperately relevant.  Real creativity and vitality will inevitably be crushed as selfish, mal-intentioned "indulgences" of those who would selfishly stray away from the imperious demands of society or economy toward their own essence and being.
Although this is a bit of a "heavy lift" when it comes to redefining the essential priorities of education reform -- Wow! It's so abstract!  What kind of changes are we talking about here! -- accomplishing changes in this distant field may mark the real turning point.  We must insist that part of the reform proposal will redefine the priorities which are quietly insinuated as we judge just exactly what's really important to the future prospects for our country.
More individualism and confidence -- less desperate obsession with empty success .
More life satisfaction -- less external validation from pay checks.
More vitality and new ideas -- less ponderous, all consuming obsession with the efficiency and dogmatic values of an aging system of status-quo priorities.
MeanMesa is the first to admit that we have our work cut out for us.  That doesn't mean that we should avoid making the fundamental changes we need just because they involve the risk of misdirecting our efforts.
Is American education headed for more of the Dark Ages or a 21st Century Renaissance?
Posted by Chad H at 10:06 AM