Part Two: "Chatting" It Up With Baggers

Although this post is directed specifically at domestic MeanMesa visitors, perhaps our international readers may also be interested.  Our national "mid-term" elections will  be rolling in on us this November, and that means it is very likely that MeanMesa visitors will be engaged in pre-election discourse with our fellow citizens from the uninformed "hill billy and bigot" crowd.
Now, MeanMesa relishes such brutal little tete-tetes.  Each encounter is yet another opportunity to confront these throw backs on their own ground.  Such "matches" add a wonderfully fulfilling, interpersonal "condiment" to the vital spark of life.
However, although these conversations can be considered "good ole' boy fun," there may be a few suggestions which can make your "bigot baiting" even more successful.  So -- this posting will cover a few possibilities which could help you make your point. 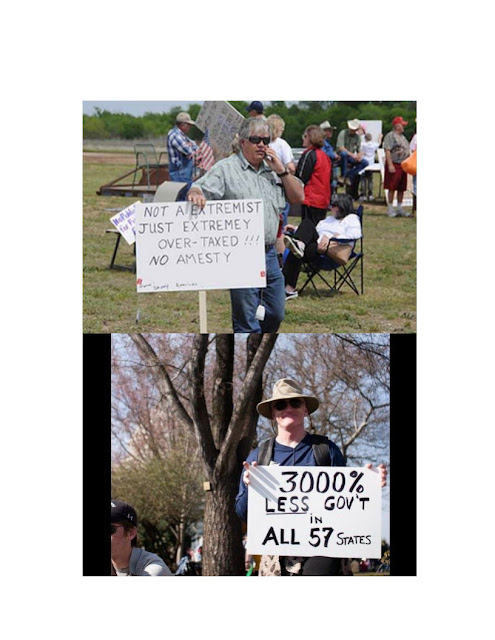 1.  The Bagger will want to avoid any argument which is based on facts.
The neo-cons, already starving from the drivel they are fed by the likes of FOX "News," Rush Limbaugh and Sean Hannity are quite averse to ever discussing politics which has arisen from factual material.  We are not talking "secret conspiracy theories" or some kind of arcane, esoteric political philosophy here.
No, a referral to even the most pedestrian sort of information one might consider readily available to the "man on the street" will cause panic among the  Baggers.  Given this premise, you can expect absolutely no conversational bout the facts involved in any issue whatsoever.  Instead, your neo-con conversational partner can be expected to immediately dispute the source of the facts, never the facts themselves.
2.  Always present your own progressive position in the most immediate and personal basis possible.

Remember:  "Generalizations mean nothing to the Bagger."  The parents of the "bite and grab" crowd have taught their off spring that cash in the pocket "right now" means everything.  Possible future events  mean nothing.
The neo-cons have been listening to half-wits such as Sean Hannity trot out their famous "most people think..." or "it is widely accepted..." authentications for a relentless collection of  trailer park conversational gambits.  In fact, the sort of repartee you will encounter from this type will almost always include citing a specific case which is supposed to validate a much broader conclusion.
For example, "Mah neighbah gits them food stemps, and his kids gotta a damned cell phone."  Such an introduction will only be able to "grow legs" if it can be, somehow, associated with "Some people say..." or "Most Americans think..."
3.  Always ask the Bagger "reasonable" questions which are always based on your immediate personal positions and not facts.

Response:  "Job losses began seven months before the end of the Bush administration.  He did nothing.  Obama's policies are now showing the first job growth since then."
Bagger Premise:  The Obamacare entitlement will bankrupt the country.

Response:  "Not changing health care policy would have bankrupt the country in ten years.  When the Republicans were in charge, they did nothing."
Response:  "The entire cost of Obama's health care reform is on the budget.  It is deficit neutral.  He said that he would not sign a bill that increased the national debt.  He didn't."
Response:  "The word 'entitlement' is a neo-con talking point.  The Americans insured under the Obama policy will pay for their health care -- the same as now."

Bagger Premise:  Obama is a Communist and a Fascist.  He is doing what Hitler did.

Response:  "According to the dictionary a Communist is the exact political opposite of a fascist.  Which one will you choose?"
Response:   "No one can be either a Communist or a Fascist just because someone said so.  What other reason do you have to think whatever you think?"

Response:  "Obama has required the Congress to pay for all money they spend.  Your man Bush didn't.  Bush borrowed the money he spent and signed your name to the note.  Your children's future will be paying back Bush's loans."

Of course, MeanMesa urges all visitors to add their own gaseous, zany to the conversation.  Although the variety of topics available for chit-chats with these information starved citizens may seem limited at first blush, a bit of traditional American "stick-to-it-iveness" will, in time, fill out the "bouquet."

Have fun, but be safe.  FOX "News" has made these Baggers unpredictable and violent.