Lest We Forget. How Bad Was It?

A Short history.
After 9/11 the unelected Junior Bush took the opportunity to consolidate several handfuls of U.S. Federal security organizations into the massive new Homeland Security Department.  Yes, of course, even the term "homeland" caused MeanMesa visitors to have  a creepy feeling from its similarity to the use of the same term during the Nazi propaganda campaign of WWII.
However, there could be little doubt that  whomever might be chosen as the head of Homeland Security would have historically unparalleled power.  Well, while the W was unable to cram this particular "lobster through the keyhole," perhaps we can say that it was the thought that counted.
Talk about a "government take over!"
By the way, this was the same little autocrat who placed the ex-lawyer from the Arabian Horse Club in charge of FEMA, the Federal Emergency Management Agency.  While the citizens of New Orleans were drowning, the little autocrat had only one thing to say while the camera lights were lit:  "Great job, Brownie!"
After that infuriating little snippet of arrogance, nominating a known New York gangster to the head of Homeland Security doesn't really taste that bad.


Let's recap the story before we take up with CNN's report.
An unelected "President," exploiting a suspicious attack on our nation, creates a gigantic police agency called Homeland Security, one which entrains more power than anything the country has ever created before.  BTW, MeanMesa courteously dismisses the legitimacy of the 911 Commission's report.  There is nothing about it, upon cooler reflection, which  is either particularly persuasive or which might validate the concentration of power this unelected "President" sought.
Having undermined traditional American "check and balance" structures in our government, the unelected "President" nominates a common street criminal as head of the new agency.

Yet another outrageous "invitation to autocratic mischief," indeed.

The remainder of the W's "attack force" continued its onsluaght against democracy.  The Secretary of Defense,  the heavily soiled and out of touch Mr. Rumsfeldt, the string of incompetent and grotesque Attorney General appointees and, perhaps the most threatening of all, the unelected autocrat's "tip of the spear," Mr. Rove, casually discharged uncooperative Federal Prosecutors, diverted huge tax money to "in the pocket" no bid contractors for war profiteering and ultimately threw the elected Governor of Alabama into an isolation cell at a Federal Prison.


Nestled in among this motley crew, the street thug, Mr. Bernie Kerik, perhaps didn't smell that bad after all.  At least not on a day when a semblance of a fresh breeze might confuse his scent from that of all the rest of the autocrat's gang of thieves.
All of this might seem to be a bit of "beating a dead horse," but please remember here,
1.  These same people expect voters to forget all of this and return them to majority power in the Congress at the November Mid-Term elections.
and
2.  The tragic heritage of the W's program of looting and destruction remains robust and in place even now.  So much damage was done, yet the neo-cons would like to convince us that the new government is not legitimately doing all it can to restore the country.
Look at your neighbor's dead  son, a casualty of the W's Oil Wars;
look at your 401K and you retirement accounts after the banksters took their 40% off the top;
remember the $800 Billion Bail Out that the W gave to Wall Street;
remember the $1 Trillion tax cut the W gave to his rich friends after he borrowed the money from China over YOUR SIGNATURE on the note;
and finally, remember stinky little Bernie Kerik, the common criminal the W was prepared to elevate to the highest position in the most powerful police agency ever.
If you can, somehow, remain comfortable with that story, you should either decide to avoid MeanMesa all together, or commit to visiting us everyday.
From CNN News:
CNN's Bernie Kerik Story [May 27] 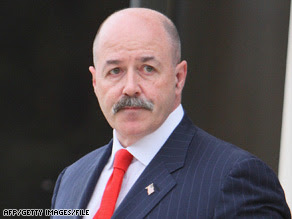 Kerik, who served as commissioner from 1998 to 2002, allegedly gave false and misleading answers to Bush administration officials about his relationship with contractors who renovated his Riverdale apartment, according to the indictment handed up by a Washington grand jury.
Prosecutors allege Kerik received and concealed benefits of about $255,000 in renovations to his home from contractors seeking to do business with the city of New York.
In December, Kerik pleaded not guilty to another indictment in New York levying similar charges against him, but those charges were dismissed because the incident allegedly happened in Washington, officials said.
Kerik's attorney, Barry Berke, called the Washington indictment "the latest example of the Department of Justice's overzealous pursuit of high-profile public figures."
He said his client is confident he will be vindicated.
Kerik , 53, is a longtime friend and former protege of former Mayor Rudy Giuliani.
Then-President George W. Bush nominated him for secretary of Homeland Security after winning re-election in 2004, but Kerik withdrew his name amid allegations that he employed a nanny who had questionable immigration status. 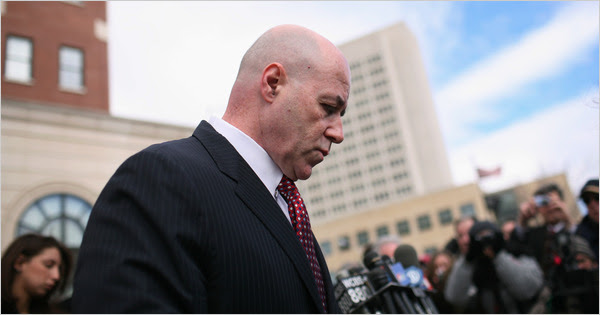 “I'd like to apologize to the American people,” said Bernard B. Kerik, the former New York police commissioner, after his sentencing Thursday.

Under the terms of a plea agreement, the prosecution and the defense recommended that Judge Stephen C. Robinson sentence Mr. Kerik to 27 to 33 months in prison. But the judge departed from the sentencing recommendations, giving Mr. Kerik a longer sentence because he said he had betrayed the public’s trust.
“I think it’s fair to say that with great power comes great responsibility and great consequences,” Judge Robinson said. “I think the damage caused by Mr. Kerik is in some ways immeasurable.”
Federal prosecutors had denounced Mr. Kerik, a former police detective who rose to the upper echelons of power, as a corrupt official who sought to trade his authority for lavish benefits. He pleaded guilty on the eve of his trial in November.
Wearing a pinstriped navy-blue suit, Mr. Kerik was thinner and clean-shaven — without the mustache he was long identified with — as he entered the courtroom in United States District Court here. He surveyed the gallery, packed with friends and supporters, embracing some, nodding to others.
When Judge Robinson offered him a chance to speak before sentencing, Mr. Kerik rose from the defense table and spoke in a low and gravelly voice.
“I make no excuses,” he said. “I take full responsibility for the grave mistakes I’ve made. Believe me when I say I have learned from this and I have become and will continue to become a better person. I know I must be punished. I only ask that you allow me to return to my wife and two little girls as soon as possible.”
As the judge delivered the sentence, Mr. Kerik sat impassively at the defense table, flanked by his lawyers. Behind him, his supporters — including Geraldo Rivera and Steven McDonald, a former New York City police officer who was paralyzed from the neck down in 1986 — sat silently.
Mr. Kerik will begin serving his sentence on May 17. Prosecutors had requested that Mr. Kerik be sent to prison immediately, but Judge Robinson allowed him to surrender later to get his affairs in order in light of the length of the sentence. Mr. Kerik has awaited sentencing under strict house arrest at his home in Franklin Lakes, N.J.
The sentence follows a fall from a rarefied perch where he wielded power with a signature mix of brash confidence and tough-guy charm.
He was a close ally of former Mayor Rudolph W. Giuliani, whom he served as a bodyguard and driver. Mr. Giuliani then tapped him for a senior position in the Correction Department, and he went on to become the agency’s commissioner. As testament to his clout, Mr. Kerik had a jail named after him in downtown Manhattan. (The name has since been changed.)
Mr. Kerik later served as police commissioner, and his performance after the 9/11 attacks turned him into a national figure, earning him the respect of President George W. Bush, who nominated him to lead the Department of Homeland Security. That bid quickly collapsed in scandal, marking the beginning of the end of Mr. Kerik’s career.
The case against Mr. Kerik centered on charges that a New Jersey construction company, the Interstate Industrial Corporation, which was suspected of ties to organized crime, had paid for renovations at his home in the Riverdale section of the Bronx. Prosecutors said company officials had hoped Mr. Kerik would help them obtain a city license.
In June 2006, Mr. Kerik pleaded guilty in State Supreme Court in the Bronx to two misdemeanors tied to the renovation of his apartment. He paid $221,000 in fines and penalties but avoided any jail time.
In the more recent federal case, Mr. Kerik pleaded guilty to two counts of tax fraud, one count of making a false statement on a loan application and five counts of making false statements to the federal government while being vetted for senior posts. Judge Robinson ordered him to pay restitution of $187,931 to the Internal Revenue Service.
Prosecutors had called for Judge Robinson to make an example out of Mr. Kerik, and to punish him for his “egotism and hubris.”
During the hearing, Judge Robinson said he admired much about Mr. Kerik, particularly his leadership in the 9/11 aftermath. But, he said, “the fact that Mr. Kerik would use that event for personal gain and aggrandizement is a dark place in the soul for me.”
Mr. Kerik’s lawyer, Michael F. Bachner, asked the judge for leniency, citing his years of public service, and the dozens of letters of support written by family members, former colleagues in the Police Department and even strangers who said they admired Mr. Kerik’s bravery.
When asked if Mr. Kerik intended to appeal the sentence, Mr. Bachner said, “No comment.”
After the sentencing, Mr. Kerik paused outside the courthouse, where he read a statement before being driven off in a black sport utility vehicle.
“I’d like to apologize to the American people for the mistakes I’ve made and for which I have just accepted responsibility,” he said. “As history is written, I can only hope that I will be judged for the 30 years of service I have given to this country and the city of New York.”
Posted by Chad H at 8:37 AM