A Letter to the Mayor of Albuquerque - The Bosque Fires

Although many MeanMesa visitors are in the Albuquerque area, our friends from other places may require a little back ground to make sense from this post.
The "Bosque" is the area on either side of the Rio Grande River as it flows South through our city.  Unlike much of the beautiful, high desert surrounding Albuquerque, the river provides this area with rich soil and plenty of natural irrigation resulting in a very beautiful, tree covered "green zone." 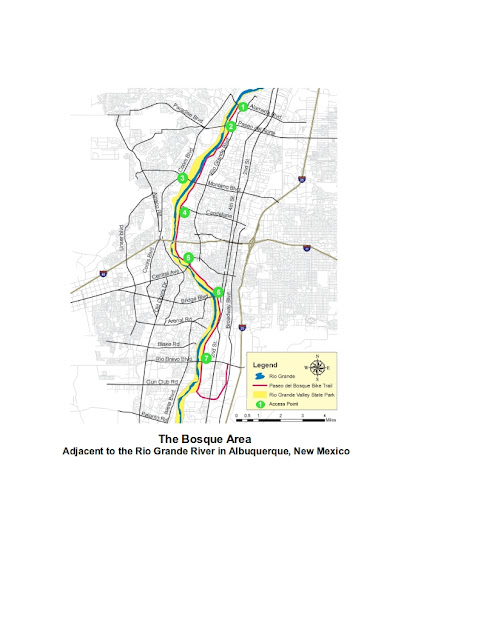 Naturally, the Bosque is a favorite place for local recreational opportunities and provides a very beneficial back drop for our city's extensive zoo and botanical exhibition.  The place is literally crawling with every sort of migrating birds and other indigenous creatures.
However, the Bosque is, unfortunately, also populated by careless homo sapiens who are frequently not as careful with fire as they should be.  The predictable result is a "Bosque Fire."  Because the area is filled with trees and brush, such fires can be quite difficult for the city's fire department.  This situation is further aggravated by the difficulty of getting residential fire equipment close enough for effective fire containment. 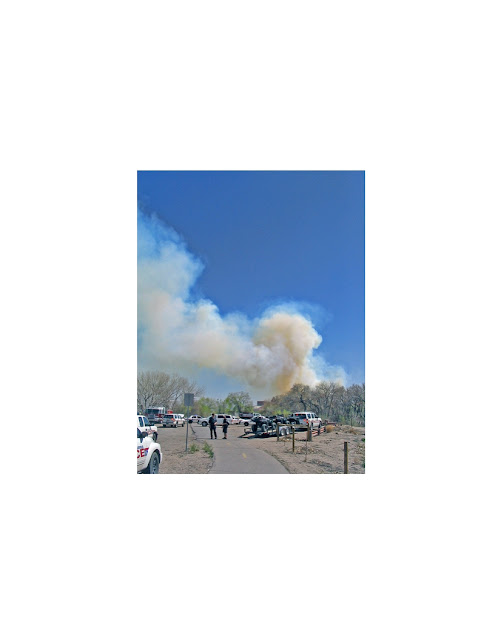 A Fire in the Bosque, Albuquerque, New Mexico
http://www.flickr.com/photos/1shtar/4494549351/in/photostream/
MeanMesa sent the following letter to the Mayor of Albuquerque this April, suggesting a new approach to fire control in the area.  The response from the Mayor's office is presented as the second letter.
Mayor Richard Berry
Office of the Mayor
PO Box 1293
Albuquerque, NM 87103
Mayor Berry:
The Bosque fire this last week reminded me of a suggestion I have offered previously.  Although I posted the idea to the last mayor, nothing developed from it.
Even -- or, especially -- when the city is facing serious fiscal problems, an opportunity exists to implement an effective and very cost efficient strategy for controlling Bosque fires.  Granted, the proposal would require spending scarce city budget funds to implement, but I suspect that it would eventually more than compensate by both reducing fire department resources directed at such fires and limiting some of the damage they routinely cause the Bosque.
The City of Albuquerque can design and build a shallow draft, self-propelled boat equipped with a high TDH (total dynamic head) pump which can deliver river water from the Rio Grands hundreds of yards inland to a fire area.  Although I can't propose specific equipment specifications, I have seen similar pumps in use for marine applications as harbor fire-boats.
For river duty, such a barge-like vessel could be quite modest compared to its sea-going marine equivalent.  Additionally, only a modest speed capability would be required to provide effective fire service.  The purchase of a marine style fire water pump would represent the largest part of the initial investment.  The rest of the boat could be designed around requirements imposed by considerations of the weight, power requirements, necessary additional equipment and craft integrity based on the pump which was selected.
Even if it were to take up to a half an hour to bring the river pump to the fire site, its fire suppression capacity would still be attractive.  By literally flooding a 200 to 300 yard swath adjacent to the river's bank, it would present an appealing advantage to the residential fire crews and equipment fighting the fire from the land side.  The boat's water delivery would be saturational, routinely extinguishing post-fire, residual "hot pots" from all the area within its reach.
Such a craft would require a two or three man crew of Albuquerque Firemen, and could be docked in a small facility placed in an optimal location, perhaps, one determined by the historical locations of past Bosque fires.  The training regime and policy requirements would need to be developed after considering conditions encountered in "trial runs."  There would be some necessary new coordination required between the land based fire responders and the river based crew.
The environmental impact of pumping Rio Grande water to an active fire would be minimal as would water rights considerations for the emergency use of small, intermittent amounts of Rio Grande flow.
A preliminary estimate for the cost of such a craft, including the pump and other required accessories, could easily reach the $200,000 range, of course subject to substantial refinement as the design progressed.  However, the public relations opportunities alone might mitigate some of this cost.  Possible suggestions here include a contest to design and build the craft or the establishment of a "Friends of the Bosque" style organization which might raise funds through contributions.  Even the naming of the craft might be presented as a sort of lottery prize where potential names could be entered by making a contribution.
The details originating from perfecting the original design might also be profitably  franchised to other fire districts facing the same problem, possibly "sharing" some of the initial program's costs.
Please direct my suggestion to the proper agency within the city government.  I have given the proposal some thought, and am quite prepared to assist in any way I can.  I remain convinced that it is a good idea -- one which would be a good choice for my city.
Sincerely,
The response from the Mayor's office: 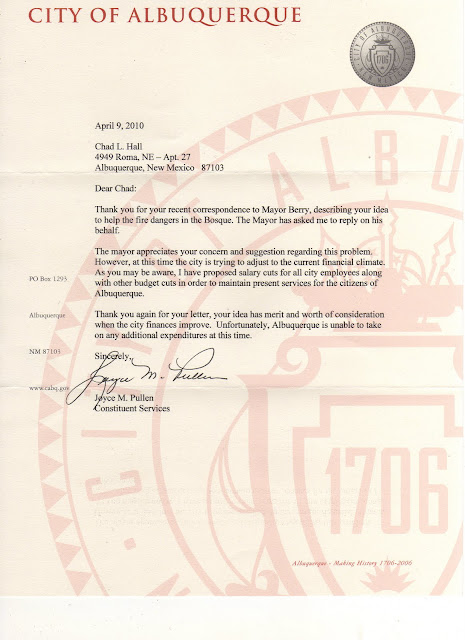 Although the city government considered the idea to have merit, the pressure the economic collapse has imposed on fiscal policy makes the proposal impossible to pursue.
Thanks Republicans.
You have managed to loot so much money from the nation's economy that almost nothing remains possible -- even in a place as far from Washington DC as Albuquerque, New Mexico.
Now, back to firing teachers to balance the city budget.
Posted by Chad H at 10:09 AM