Putting "Flesh and Bones" On the Republican Recession

Now, MeanMesa has learned long ago that mathematicians should probably not wait by the phone for invitations to glittering cocktail parties or whoopie style bar-be-que picnics.  Even otherwise strong willed, durable women are  more likely to show more interest in an evening of bowling than even the most remote prospect of an intimate "exploration" of the proof for the Greene and Stokes Theorem.
It's a phobia.  In fact, it's the "math phobia," and it's the lifelong curse of the romantically challenged mathematician.
Because of this, MeanMesa has always adopted an understandable reluctance to the idea of simply posting a string of charts and graphs, regardless of their relevance or pressing, immediate applicability to current events.  In this case, however, the "posting muse" calls too passionately for revelation and redemption.
So, emerging from this apologetic warning, MeanMesa visitors are encouraged to view what is presented here as bravely as possible.  In fact, the shortcomings of MeanMesa's questionable, geriatric "computer savvy" may serve to soothe one's first, automatic revulsion.  This material was originally posted by the Huffington Post, and what you see here suffers from not only the graphics problems of that original source, but even more, further compounded graphics problems introduced in the process of placing the material on this blog.
MeanMesa ginned up the old, coal fired "jpeg factory," unleashed that unpredictable mechanism's output to the meat grinder of the "blog maker," profusely apologized, and wound up with this.  So, take a look.  The link provided will take the interested visitor to the original Huffington document which includes a significant narrative.
http://www.huffingtonpost.com/2010/04/19/the-scariest-charts-of-th_n_540456.html#s82340

For everyone else, a simple glimpse at the charts will convey an almost complete understanding.  Again, excuse the spacing and other glitches -- it's the information which is important.
Chart 1:
The red line is the "normal pay" of Wall Street brokers.  The black line is the bonuses they received in each of  the corresponding periods. 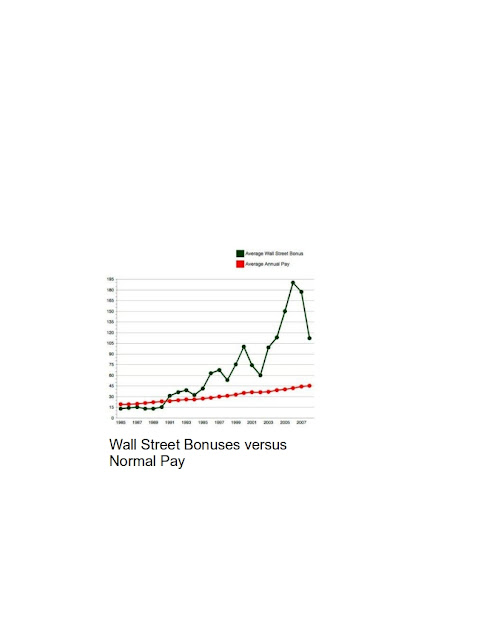 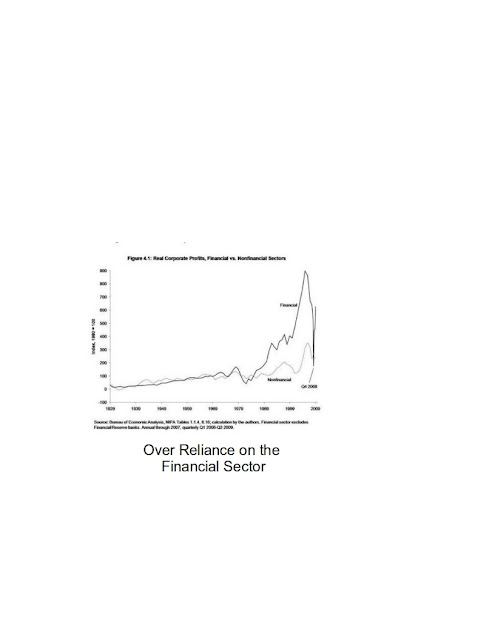 Chart 3:
The red area of this "debt chart" represents mortgage debt.  The blue area shows the growth of other, non-mortgage, consumer debt.  All the data is presented as a percentage of the US GDP. 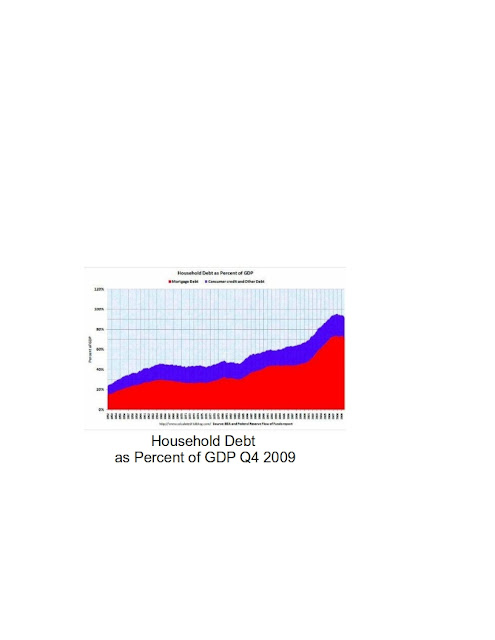 Chart 4:
The upper lines in this graph show the increases in income for the top 400 Americans during the last fifteen years.  The rather dismal lower line shows the income level of everyone else.  The title of this chart is in error.  The rate of increase is 476% not 47.6%. 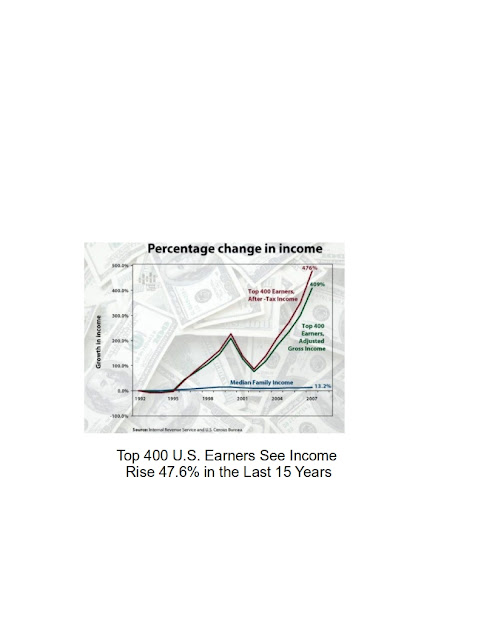 Chart 5:
The line on this graph shows the share of total income in our country which is going to the top 10% of the richest citizens. The basic idea of the American Dream suggests that an individual's monetary success will result from innovation, invention, waste reduction or efficiency improvements.  Gosh!  These guys must not only be geniuses but also good, honest, hard working  citizens.  Right? 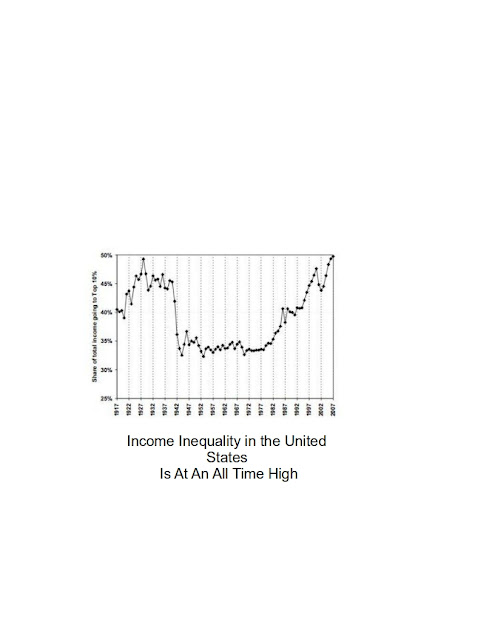 Chart 6:
This graph shows the historic record of the average period of unemployment. 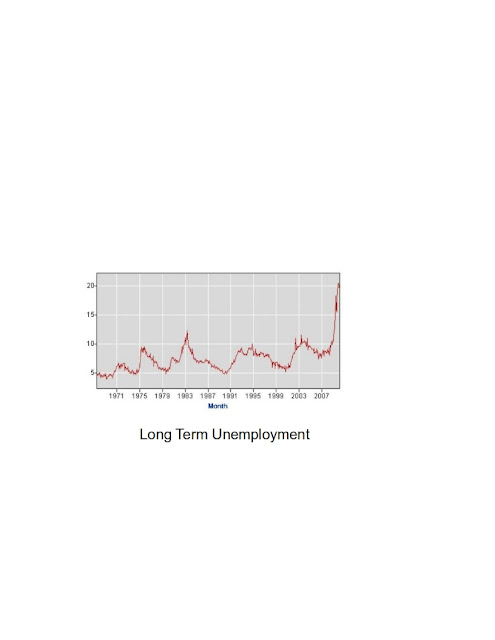 Chart 7:
This chart shows the history of how many workers are working part time as a result of the national economy.  Recessions are shown by the grey columns. 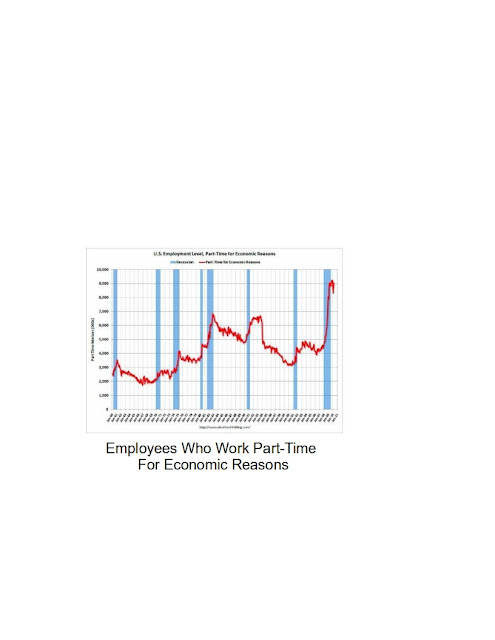 Chart 8:
This graph shows the historic rates of home foreclosures.  Plummeting house prices after the real estate bubble collapsed account for some of these, but we have to assume that most foreclosures result from losing a job. 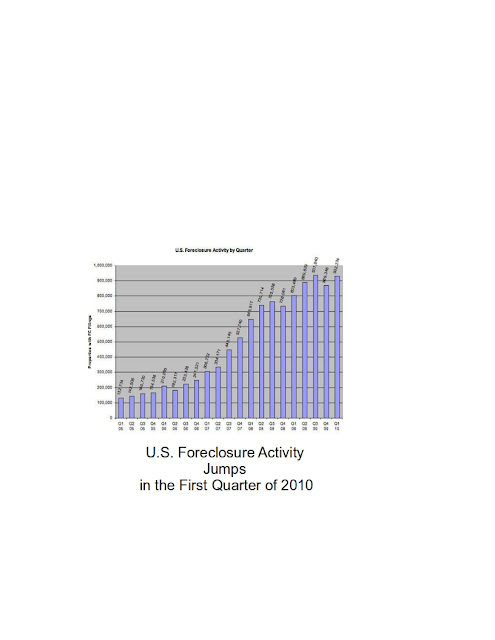 So, when, in your conversations with those who believe that our current mess is Obama's fault because he is:
a cannibal from Kenya
a socialist
a Nazi
a Muslim
the Anti-Christ
or, simply a mistake resulting from tricking the American voter
you are now equipped to constructively "educate" them.  Be patient.  These folks haven't learned anything in a very long time.
However, always remember that your friends plan to ignore all of this and vote Republican in the mid-term election if you can't help them!
MeanMesa thanks Huffington Post for consolidating and providing this information.