The Republican Playbook: What to Expect

Stephanie Miller, host of the liberal talk radio show, (The Stephanie Miller Show,1350 AM, KABQ, Albuquerque, 7 AM to 10 AM, weekdays) introduced a possible neo-con talking point for the November mid-term election campaigns.
"Put the NO back into NOVEMBER!
Vote for the Party of NO!"
By the way, for those who are unable to listen to the show, Stephanie Miller is exponentially hotter than any of the emaciated, "skeletor style" bleach blond babes from the other side. 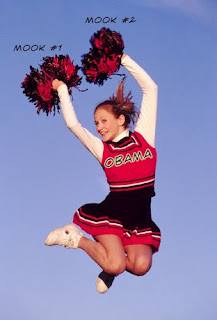 To election reform -
1.  Mutter something about "State's Rights" as if the Jim Crow days were still going on at full steam.  Don't forget to drawl.
2.  Tell everyone that you are not a bigot.
3.  Go to the next suggested response.
To carbon cap and trade -
1.  Call your friends at the coal companies to see what they want.
2.  Add dire predictions of national economic collapse to your routine comments about "States Rights."
3.  Vote against it, then collect your campaign contributions from the coal companies.
To the restoration of "family values" -
1.  Pay off the "rent boy" in the back room.  Buy him an airline ticket to, uh, France.
2.  Add something from the Bible to your routine comments about the end of America, abortion, gay marriage, gun control, "States Rights" and clean coal.
3.  Vote against it, then hand the microphone to the nearest "dirty shirt preacher" while the cameras are still running.
Don't be nervous.
Just follow these simple guidelines and you'll do fine.
Posted by Chad H at 7:55 PM