For any MeanMesa visitors who are still not completely "up to sniff" with the Arizona story, Short Current Essays offers the following amplifying details.  Now, unlike the now infamous WikiLeaks, MeanMesa cannot claim access to otherwise out of reach news sources, so, inspired by Randi Rhode's comments (The Randi Rhodes Show, KABQ 1350 AM, Albuquerque, 1-4PM weekdays, 27 July 2010) we have done just a wee bit of Googling looking for the facts.
Here's what we found.
The last elected Governor of Arizona was Janet Napolitano, a rather insightful Democrat.  The current Governor of Arizona is the unelected Jan Brewer, a Republican woman who served previously as Arizona's Secretary of State.  Aside from being an ever so slightly less malnourished reactionary waif than Ann Coulter, Ms. Brewer, it turns out, has the traditional Republican difficulty of being unable to actually govern.
Her frantic efforts to "close the incompetence gap" have now, of course manifest themselves in her wild rantings about the "threats," "drug violence" and general undesirability of all the illegal immigrants who traditionally flood into her state from Mexico.  Naturally, missing from her frenzied, high pitched publicity statements is any mention of the fact that her fellow Republican reactionaries have so thoroughly ruined the U.S. economy that millions of previously illegal immigrants are now returning home to find work.
First, a short article from Fire Dog Lake about the "unelection" which placed this woman in charge.  This is an especially "tender issue" for the citizens of Albuquerque -- the city which hosts MeanMesa's Galactic Command.  Our last mayoral election placed a Republican in office when a large majority of the city's votes were Democratic.

Arizonans, Stung by Unelected Gov, Will Vote to Change System

By: Jon Walker Monday July 19, 2010 1:13 pm
The state of Arizona doesn’t currently have the position of lieutenant governor in its government, but that could change if voters approve a ballot measure this November. Right now, if the Governor prematurely vacates the office, the Secretary of State is the replacement. That is how Republican Secretary of State Jan Brewer ended up becoming Governor, by replacing Democratic Governor Janet Napolitano when she left to become Secretary of Homeland Security. From the “Arizona Republic” via Ballot Access News:

Arizona is experiencing firsthand the importance of a line of succession for Governor. They’ll get the chance this November to change the state’s constitution if they don’t like the current process. This reform would create a single joint general-election ticket for Governor and Lieutenant Governor, so they are always of the same political party, creating consistency in government. It does mean the party in the Governor’s mansion will also always have control of the traditional functions of the Secretary of State. In addition, it will slightly shorten the general ballot by eliminating the separate statewide vote for Arizona’s second in command.
source: http://elections.firedoglake.com/2010/07/19/arizonans-stung-by-unelected-gov-will-vote-to-change-system/
The second article presented here is from the Tucson Citizen.com (Tucson is a large city in Arizona)

by three-sonorans on Jul.01, 2010, under Election 2010, Politics
Jan Brewer has serious issues with the truth.

Brewer has three huge lies in one month
Everyone lies at one point or another, but she has a special knack for choosing lies that are extra-sensational, using Nazis, terrorism, and immigration as her subjects.
A politician who makes false statements about the future, perhaps not living up to a campaign promise, is much different than lying about the past, where the facts are actually known.
There is a difference between saying “the war in Iraq will end in a year from now” which ends up being a false prediction, and saying “what war in Iraq, there is no war there!” The previous sentence was just hypothetical statements to illustrate the difference, but now to the actual lies by Brewer.
Recently she said that her father died “fighting the Nazi regime in Germany.” This is a statement that should never be a lie, because you should know when your own father died, and whether it was in a war or not. Truth: her father died in 1955 in California.
Then she said that the majority of immigrants from Mexico are drug mules, ignoring the facts that even Fox News reports about how most immigrants enter this country legally and simply overstay their visas. This was just last week.

From Benson of the AZ Republic
Now is her third big lie in about a month.


“Our law enforcement agencies have found bodies in the desert either buried or just lying out there that have been beheaded,” Brewer said Sunday, suggesting that the beheadings were part of increased violence along the border.

But medical examiners from six of Arizona’s counties — four of which border Mexico — tell the Arizona Guardian that they’ve never encountered an immigration-related crime in which the victim’s head was cut off.

These gross types of lies from our unelected governor are unacceptable.  Either she has serious issues with telling the truth, or she’s lost her head.
source: http://tucsoncitizen.com/three-sonorans/2010/07/01/brewer-losing-her-head-over-new-lies/
Finally, especially if you are waiting patiently for a "pay off" for having read all these widely varied news reports, we must, once again, reveal the common scourge of unelected Republicans.
Can there be any understandable reason for Ms. Brewer to launch into such a poorly designed strategy?
Of course, her rantings invigorate the hordes of hill billies and bigots tucked carefully into the Arizona desert, perhaps even enough of them to actually elect her in the upcoming gubernatorial elections.  But could there be any other reason for this wildly ugly behavior?
Here, as usual, we are talking about "following the money."


Is Jan Brewer’s spreading fear hurting the economy more than the boycott? 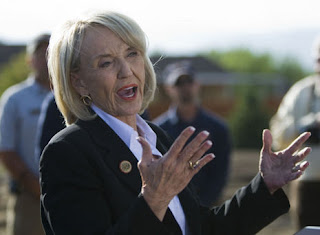 Why would you bring your family here if Arizona is so dangerous?

KPHO 5 in Phoenix has an excellent story today about two main points:
I could not embed the video here, but you can check it out on the KPHO website, and a short excerpt regarding the profits the private prisons will be making is below.

In the meantime, a CBS 5 investigation revealed that there is one business that could gain from the implementation of SB 1070 and similar immigration measures. The private prison industry houses illegal immigrant detainees for the federal government. Those companies could gain contracts with state and local agencies to house illegal immigrants arrested for state violations.

Corrections Corporation of America, or CCA, holds the federal contract to house detainees in Arizona. The company bills $11 million per month. CBS 5 Investigates has learned that two of Brewer’s top advisers have connections to CCA.

Paul Senseman is the governor’s deputy chief of staff. He is also a former lobbyist for CCA. His wife is listed as a current lobbyist for the company.

Chuck Coughlin is one of the governor’s policy advisers and her campaign chairman. Coughlin’s company, HighGround Public Affairs Consultants, currently lobbies for CCA.

“CCA, unequivocally, did not at any time lobby – nor did we have any outside consultants lobby – anyone in Arizona on the immigration law. Nor are we proposing to house detainee immigrants as a result of SB 1070. We currently have no contracts with the State or any counties. CCA very proudly does have a presence in Arizona, as we own and operate 6 correctional facilities, employing more than 2,500 Arizona residents. These contracts are with other state and federal jurisdictions.”

Meanwhile, at Rancho de la Osa, Richard and Veronica Schultz said they don’t know much about the motives behind the politicians making alarming statements about the border.

Their hacienda survived a real attack from Pancho Villa. It might not survive the war of words from politicians, Richard Schultz said.
“I think they’re covering their own personal interests, and as a consequence, Arizona and its tourism needs are being the sacrificial lambs to some extent”