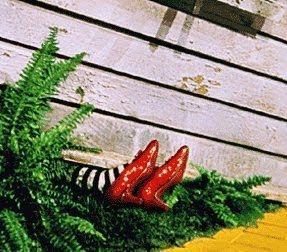 The Supreme Court calls for a "review" of the Don Siegalman case.  In this instance, the "wicked witch" is none other than Karl Rove, the corrupt, fascist servant of the late autocrat, the unelected President "Pretender," George W. Bush.
(image source) 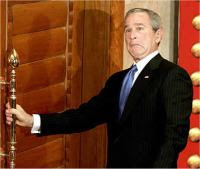 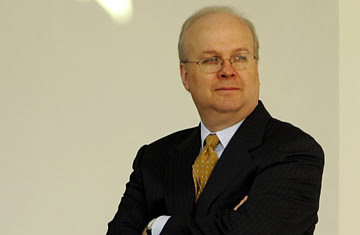 
Karl Christian Rove (born December 25, 1950) was Senior Advisor and Deputy Chief of Staff to former President George W. Bush until his resignation on August 31, 2007. He has headed the Office of Political Affairs, the Office of Public Liaison, and the White House Office of Strategic Initiatives. Since leaving the White House, Rove has worked as a political analyst and contributor for Fox News, Newsweek and The Wall Street Journal.
Prior to his White House appointments, Rove was a Republican political consultant and strategist. Rove is credited with the successful 1994 and 1998 Texas gubernatorial victories of George W. Bush, as well as Bush's 2000 and 2004 successful presidential campaigns. Rove has also been credited for the successful campaigns of John Ashcroft (1994 U.S. Senate election), Bill Clements (1986 Texas gubernatorial election), Senator John Cornyn (2002 U.S. Senate election), Governor Rick Perry (1990 Texas Agriculture Commission election), and Phil Gramm (1982 U.S. House and 1984 U.S. Senate elections).
Rove's name has come up in a number of political scandals, including the Valerie Plame affair, the Bush White House e-mail controversy and the related dismissal of U.S. attorneys controversy.
MeanMesa has experienced plenty of, uh, "digestive moments" watching the sordid tactics of Karl Rove as he sheparded Bush Jr. through election fraud in both 2000 and 2004.   (Remember "caging?"  Thousands of voters in Democratic precincts were removed from the election polls.)
Mr. Rove, thanks largely to the grotesque Attorneys General appointed by the autocrat, was able to almost completely corrupt the U.S. Justice Department, firing all Federal Prosecutors who would not cooperate with his nation-wide scheme to "kangaroo lynch" Democratic candidates.  (Justice prosecuted three times as many Democrats as Republicans during this time.)
However, the MeanMesa's greatest "gastric disturbance" arose from this little crook's amazing arrogance.  Even after an American Democratic government regained power in 2008, not a day passed when Mr. Rove's skanky little mouth didn't need a good washing with some strong soap.
It seemed that all the crimes of looting and protection executed by the neo-cons would simply fade into an unpleasant chapter in a forgotten history.  Happily, maybe not quite so fast!
For the information challenged among MeanMesa's visitors, the tale of just what happened to Alabama Governor Don Siegalman might need a bit of refreshing.  Among all the myriad outrages to the Republic perpetrated by the Bush Crime Family, Siegalman's torment wasn't really that much worse than the norm.  However, this Supreme Court decision may become a landmark of the resurrection of the Nation -- it can evolve to include some of the most powerful and sinister players, right up to the Oval Office.
We can dream.
Siegalman "won" the gubernatorial election in Alabama in 2002.  The man currently sitting in the Alabama Governor's office is not the elected Governor.  Don Siegalman went to bed after that election with a certified victory.  At 3AM the next morning, a smelly bunch of crackers in some remote district "found" thousands of votes which "unelected" Siegalman and "elected" the Republican who had "lost" the "election" the day before.
Sound familiar?  The Connecticut "Cowboy" took control of our country in roughly the same fashion in 2000.
Too many quotation marks for even MeanMesa!
MeanMesa defers to some professional journalism at this point.

An account (TIME/CNN) of just what has transpired with the Supreme Court decision: