PSI and Pressure -- Making Sense of the Gulf Disaster

MeanMesa has watched, stupified, as every subterfuge -- many based on conflicting standards and units -- has been craftily employed to obscure the physical facts of the events in the Gulf from the non-engineering community.  The old military joke about "furlongs per fortnight" didn't seem to surface -- yet -- but the constantly alternating "barrels" to "gallons" and back has served quite nicely to obscure the gravity and scope of the consequences of BP's safety infractions.
When a giant, temporarily sheepish, global oil corporation starts getting nervous about the final $CASH$ figure for the remedy demanded by our government, exactly what did we expect from the likes of Rupert Murdoch, Fox "News" and the Washington Times?  Simple, the public good means nothing when it jeopardizes corporate profits.
Well, moving gracefully away from the well lubricated, cheap and stinky "tricksterisms" of the corporate media frauds, MeanMesa decided to take a crack at the "pressure" business.  This aspect of the Gulf disaster has apparently  been selected as the next arena for obscuring all reasonable background information from the public.
As usual, we're flying blind.
Let's take a layman's look at what we can derive from the "news" we've been getting to date.  There actually exist a few "reported facts" which can be extracted from what we've been told about this mess so far.
A quick descent to the well head at the bottom of the sea
The ocean floor below the recently sunk Deep Water Horizon rig is roughly one mile under the surface.  The term "water column," so far used almost exclusively by environmentalists, also pertains to the pressure physics prevailing down at the well head. 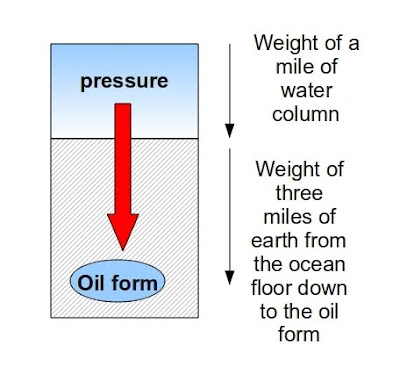 The entire weight of the water in the mile high column of water above the well head is pressing down on the oil trying to escape from the casing.  The pressure in the oil form has been exceeding the water gravity pressure enough that, instead of pushing the oil back down into the oil form, it has had a high enough pressure to flow out into the ocean. 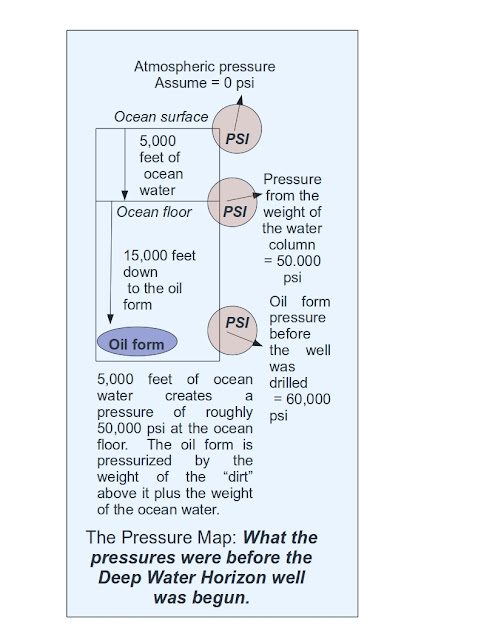 When we begin to look at the actual amount of pressure, measured in PSI -- pounds per square inch -- the numbers become startling.  The water column is so heavy that it produces roughly 50 - 60,000 PSI pressure at the sea floor where the broken well head is located.  Again, since the oil was able to flow out into this high pressure receiving area, we have to assume that the pressure inside the oil form was even higher.
The oil form itself may have what we could call an "artesian pressure" all of its own.  In this case, that would have been the pressure inside the oil form even before the exploratory well was drilled into it.  However, even though the oil form is another three miles under the ocean floor, not only the weight of the water column but also the weight of three miles of dirt and rock are "pressing" down on the oil form.
Here, two more assumptions can be added to the mix.
First, the BOP (blow out preventer), the acoustic safety valves and other equipment necessary to have made the well safe as it was being drilled become more and more expensive the higher the pressure gets.  This well safety equipment might have one price tag if it were for a much lower pressure  well in the backyard of some farmer in Odessa, Texas, but it will have a much higher price for a much more pressurized oil form at the bottom of the ocean.
Second, although most drilling uses a more or less standard sized drill casing -- about 13 5/8" in diameter, this particular exploratory well was drilled for a 21" diameter casing.  The "flow section" of a standard sized casing would be around 580 square inches.  The "flow section" of the larger, 21" diameter casing would be around 1380 square inches.  The "flow section" tells us the size of the opening where the produced oil could flow out of the well and into the corporate "pockets" of a company such as BP as a well deserved profit for good safety engineering, hard work and risk taking.
The important point here is that the "flow section" of a 21" diameter casing is much larger than what we might expect when we looked at the "flow section" of a standard casing.
All of this may be some rather tedious algebra, but there are some interesting implications of this size difference.  If a BOP for a 13 5/8" casing weighed 10,000 pounds and cost $1,000,000, the same valve for a 21" casing well might easily weigh 75,000 pounds and cost $5,000,000.  A similar increase in weight and cost may be assumed for the other respective well safety elements corresponding to the rest of the equipment which should have been used as the well was being drilled.
When the full cost of a well designed safety system -- including all sorts of choke valves, casing rams and other things -- for the 21" casing gets "totalled up," we begin to see the incentive for, well, cutting corners.
These would be just precisely the "corners" for which the "corner cutting" might have been discussed at the secret energy meeting between Dick Cheney and some oil executives early in the autocracy.
To "straighten out" the fancy "pressure talk" which has been filling the air waves of late, we have to find what is meant by the 8 - 9,000 PSI everyone was looking for after the most recent cap was put into place.  MeanMesa visitors may recall that, although the "cap" seemed to have stopped the flow of oil, the BOP's manifold valves were being closed very slowly.
Watching the "news" of the "spill," we saw everyone waiting with "baited breath" to see whether or not the oil under the new cap would develop 8 - 9,000 PSI after the final side valves were slowly closed.  If the pressure went that high, it would be an indication that the down hole casing was, in fact, in tact.  If the pressure didn't go that high, it would be a clue that maybe the casing had been fractured by all the weight of the "top kill" concrete and mud which had been attempted earlier.
This 9,000 PSI pressure was not to be measured in a particularly understandable way, either.  The 9,000 PSI everyone was hoping for would amount to the pressure the oil form would be exerting on the flow at a place where the outside pressure was not the 50,000 PSI of the ocean floor, but rather the essentially zero pressure of the atmosphere up where the tankers were to gather the flow on the surface. 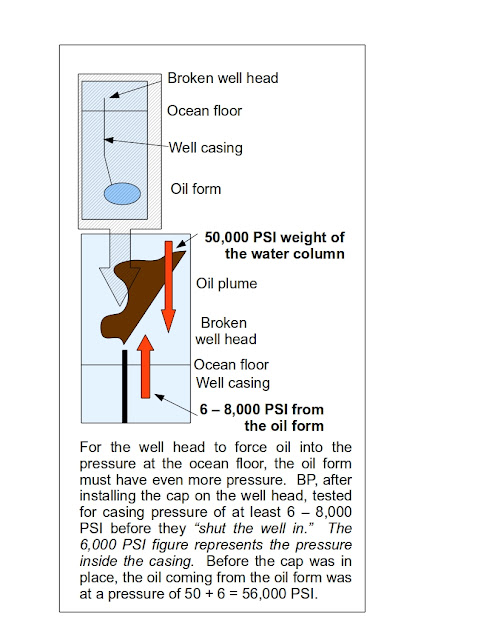 We must also remember that, although the Deep Water Horizon rig did not necessarily "land" on the well head as it sank, it did manage to jam the casing riser which had originally gone to the rig down on the well head, wrecking whatever "shut in" equipment was actually there in this "bargain basement" exploratory well.
A Few Other Horrible Possibilities
Since we are already "ankle deep" in an oil soaked nightmare, we may as well take a look at some of the more distant possibilities worrying BP and our government.
When a well is drilled, the down hole bit is usually rotated by very high pressure drilling mud.  When bits of rock and dirt are cut by the drill, this mud carries the cuttings out of the way and then oozes up along the outside of the casing.  The effect of this is that the casing is gradually "cemented" into place and held there firmly.
Further, the steel casing for any well is tough.  In this particular case, however, there is some question about whether or not the casing was "tough" enough to stand the pressure which came from the weight of the "top kill" mud and concrete.  The additional "horrible possibility" is that the casing cracked.  The 9,000 PSI everyone was relieved to see at the new BOP might be the product of oil not being able to escape the casing through such a crack because there was still enough drilling mud around it.
If the oil flow gets this chance to run into the mud around the casing (called the anulus) it will probably be able, given time, to force its way to the surface of the ocean floor.  If this happens, the out of control oil flow will not be coming out of the casing any longer, and will, instead, be flowing out of the dislodged mud anulus around the casing -- essentially flowing up out of the ocean floor.
In this case, a BOP cannot be placed over such a "leak."  It would be time for "Plan B," except, of course, there would not be a "Plan B."
Another "horrible possibility" is that the casing, once the oil flow had pushed its way through three miles of the mud anulus, might be simply dislodged entirely.  In this case, the entire sub-floor casing riser -- 3 miles of tough, 21" diameter, steel casing -- would shoot up from the oil form and out into the sky in the very concerned view of the folks working on the ships above.
A third "horrible possibility" is that the oil form itself might seek out the weakest area of the rock and dirt plate above it and gradually fracture a new "escape path" for its incredibly pressurized crude.  Such a process, although possibly a short term matter, would most likely become a long term issue, releasing the first oil from the fractured ocean floor over a period of months or years.
Sleep tight.
An "exceptionally humble," MeanMesa post-posting note of clarification:
An extremely perceptive MeanMesa regular visitor sent along an email literally moments after this masterpiece had been posted.  The point?  The numbers.
Probably reflecting the "up down, all around" estimates of just what a successful pressure inside the shut in well might be, an understandable confusion developed.  In the text of the posting, the figure 9,000 PSI is mentioned.  In the diagrams, 6-8,000 PSI is noted.  Of course, both ranges of figures have been very generously "bandied about" in the media.
So what's the "right answer?"
Begin with the idea that no one, absolutely no one, knows the "right answer."  In fact, all the figures used in this explanation are the product of estimates, conflicting reports in the media and generalized approximations of what the actual facts might be. This "generic" treatment is meant to be a useful addition to what garbage our visitors may have "collected" as they followed the saga.
That is, "collected" in precisely the same manner as an aging ham sandwich left after a picnic might "collect" flies.  Just do your best with what is presented here.  Agree with it, don't care or prove that it's wrong.  The message is always the same:
Get informed.
Stay informed.
Don't get "hornswaggled" by the rush of misinformation.
Posted by Chad H at 2:20 PM