Speeches We'd Like to Hear - Obama on the Deficit

Of course, any blog as megomaniacal as MeanMesa entertains fleeting fantasies of our President "lowering the boom" on his prevaricating detractors.  However, reality is what it is, and our President is not an inflammatory, finger pointing imbecile.
The citizens of the country have been edged into a neurotic state of expecting more of the autocrat's three syllable "hate phrases," and the far more genteel Obama seems unsettling secure -- and mature -- by comparison, not to mention literate.
Still, there remains the fantasy.  Wouldn't it be nice to "put words in his mouth?"
The most recent flood of lies and misrepresentation of fact deals with the deficit.  As the President's approval rating dips to the 50% range, we have to conclude that the relentless barrage of fear mongering and sleazy incitation is inflicting is damage.  However unpalatable to the Commander in Chief, the consequences of this latest, cynical manipulation of uninformed voters is approaching the gravity of a national security threat.
It is time for Barack Obama to become the "teacher."  In this case, the class subject must be the deficit.

This evening I can no longer 'mince words' about a serious threat which is confronting our nation.  Although my political advisers warned me in strongest terms not to introduce 'charts and graphs' in this message, I find it necessary to be completely frank and open about certain facts.  Those same advisers counseled me to avoid what might seem political references to past administrations.  Regrettably, I also find it necessary to break my own rule in this respect.

I have no interest in using this opportunity to make political advantages.  However, we have no choice at this point but to face facts, and some of those facts have names associated with them.


Recent days have seen great efforts being made to confuse or misrepresent the information I intend to present tonight.  In the Congress my Republican colleagues have attempted to color the facts concerning our deficit and the resulting national debt into a political advantage for themselves.


Perhaps my talk tonight will help make these sometimes complicated matters clear.  Make no mistake.  The economy of our country is my responsibility.  That happened when I took the oath of my office.  However, as Americans we are all in this together.


For this reason and because a growing misunderstanding of the difficulties we face as a nation has begun to cloud our best common sense as a people, this speech tonight is reserved for this single topic.


Now to the charts.  I ask that every one of you give me the following few minutes to go over the facts about our deficit and our national debt. 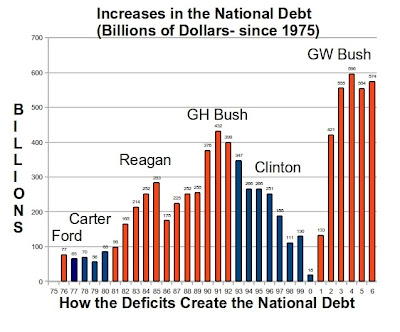 (Image source - MeanMesa)
The first chart shows the annual deficits our government has incurred since 1975.  Each year is shown, red bars representing the years of Republican administrations and blue bars the years of Democratic administrations.  To make this even more clear, the names of the respective Presidents are shown above the bars.


We can see that the Federal Budget of this country has operated at a deficit for the entire span of the years on the graph.  We have continually spent more money than we have received in taxes.


Each of these annual budget deficits gets added to make the total of our national debt.  We, as a nation, find ourselves borrowing the money required to 'service' this debt.  Some of the borrowing is from citizens in the United States, but much of it is borrowed from other countries.  The interest we pay on this borrowed money is immense, getting higher and higher every year.


That interest cost is now so high that it is beginning to harm our national economy.  Our national debt has grown so large that it is becoming more difficult to borrow more money.


As we look over this first chart -- by the way, there are only two of them -- we see that some of the loudest voices in the Senate and the House of Representatives who are now attacking this administration on the deficit of our budget were voting in favor of the exact spending which sky rocketed our debt.


My Republican colleagues have voted lock step against every piece of legislation we have introduced to 'bend the curve' on this deficit and debt problem.  They recently voted against an extension of unemployment payments.  They voted against childrens' health care, against regulations for banks and Wall Street, against mortgage foreclosure assistance and against plans to spur jobs growth.


In every one of these cases, their complaint was that such legislation would increase the deficit.  Yet, when we look at this chart, we have to think that such a position is a new one for them.  These same Congressman and Senators voted for more deficit with every Republican administration since Ronald Reagan, the first American President to preside over a $1 Trillion dollar debt. 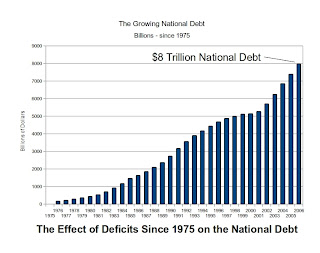 (Image source - MeanMesa)
Now, I really have some explaining to do.  This year, my budget showed a $1 Trillion deficit -- roughly twice as high as the last year of the previous administration.  Why am I sitting here saying these things about past deficits when my own record is even worse?  Why were we spending money at that rate?
I added the actual cost of the wars in Iraq and Afghanistan to my budget.  They had always been 'emergency supplemental' bills before.

The answer is in my first chart.  As the national debt sky rocketed, especially in the last few years before I became President, our economy began to feel the heat.  Unemployment shot up out of control during the last seven months before I took office.  The economic downturn of the recession and other regulatory problems reduced the entire national wealth of the United States by roughly one third.
Everyone with a 401K plan or a house which has lost value knows that first hand.  The value of the stock in your retirement accounts went down.
As our economy contracted, the revenue the government receives from taxes also went down sharply.
My advisers told me two important things, and it turns out that they were right on both counts.  First, we needed to spend money to get cash back into our economy and create jobs.  We did that with the American Recovery Act, and that part of their plan is working out fairly well.
However, the second thing they told me was that just as soon as we emerge from this recession, it would be time to cut the deficit, and not just a little tweeking here and there.  I intend to do that.
The news from Europe is about austerity programs designed to drastically cut budgets there.  We face many of the same type of cuts.  We already see teachers, policemen and fire fighters giving salary reductions or being laid off in communities which simply can no longer afford the policies they had previously.
We will likely see more.  Our economy is larger and healthier than those European cases, but some of the same kinds of austerity will be necessary here.  These changes will be painful, but they are unavoidable.  When such sacrifices are necessary for all of us, each American must understand clearly what has caused this and what we must do to correct it.
Tonight, I am asking all my fellow Americans to stay with me. We, as a nation, will get through this so long as we remain clear-headed and  keep our American common sense.  My administration is doing everything we can to make this work.  I am counting on Americans to get through this with me.
Thank you, and God Bless America."
MeanMesa's compliments to the President.
Posted by Chad H at 9:48 PM