The Taliban War and Ancient Wisdom 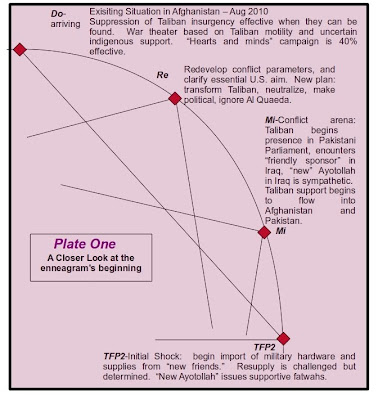 Re - As we enter the process, the disadvantages of the current linear thinking emerge immediately.  Our present goal of "killing them all" is actually not consistent with our long term ambition for the conflict.   In fact, it's apparently not even possible.   What we actually want is for the Taliban to stop being wild, out of control jihadists and become some manageable element of the Pakistani democracy.  Continuing the equivalent of a "parking lot fist fight" hardly furthers that goal.
It it were "on track," we wouldn't still be doing more of the same nine years later.
Mi - Instead of worrying about being the Taliban's infidel enemy, perhaps we should begin to consider just who might become the Taliban's friend.  At the moment, invisible Saudi royalty are piping our petroleum dollars to the insurgents.  We can do better.
Let's "find," perhaps, an Iraqi "Ayatollah" who is sympathetic to the Taliban's interests -- at least one who appears to be sympathetic.  He can author a few inflammatory fatwahs and begin shipping resources to the Taliban in Pakistan and Afghanistan.  These would certainly include all sorts of things the Taliban might need, but, provocatively, they would also include military supplies.
Military supplies??!!  To fight against our own troops?  What are we thinking?
The Taliban commanders who can take credit for this new advantage would become even more popular among the rank and file of the insurgency.  The individual Taliban in the field would enjoy a new validation:  "Our leaders have found supporters outside the combat theater!"
Of course, the U.S. can greatly assist this "Ayatollah" as he makes his rounds.  The exact military hardware he will provide the Taliban will be the real thing, but it will not be particularly suited to the combat conditions currently in place.  For example, the Taliban might receive heavy machine guns -- really heavy machine guns, explosive components for their famous IED's, but extremely volatile and unpredictable explosive components, the shipments could easily include large quantities of out dated ammunition, grenades and RPG's which were long past their "expiration dates," and the like.
Further, there would be no need to stop with things which were simply, somewhat, theoretically useful.  Glory hungry Taliban commanders would probably love to own a small Howitzer, a personal armored personnel carrier or even a used tank.  None of these assets could be transported to the combat zone, and each of them would be visible to our unmanned drones.
TFP2 - In our enneagram, this represents the first of two "refining shocks."  As the resources from the Taliban's "new friend" begin to arrive in the tribal regions, the entire Taliban force would find themselves inebriated -- seriously emboldened with the prospect of finally having all the arms they might need to actually win.  The tactical difficulties inherent in such resources would only gradually become apparent, but the delay would create a "tactical window of opportunity."
Remember, the Taliban commanders would be "flying high" with renewed support for having made the now, all important connection to the generous Ayatollah. 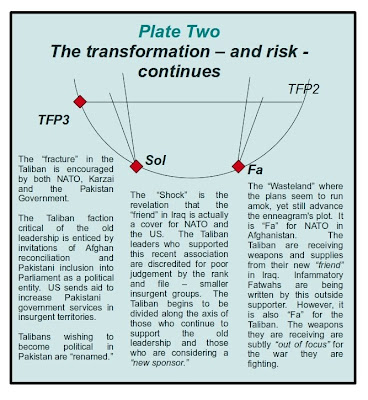 Fa - Commonly considered the "wasteland" in an enneagram, Fa is the chaos left over from the substance at Mi and its refining shock at TFP2.  For the time being, NATO forces would, in fact, be facing a Taliban enemy which was -- sort of -- being resupplied with all the junk the "new friend" was sending to the combat theater.  Also important, the Taliban leadership would still be enjoying a renewed and invigorated reputation as the "fellows who took our fight international."
Sol - the second of the refining shocks in our enneagram sees this strategy's first material accomplishment.  With a highly publicized dramatic flair, it is revealed that the Taliban's "new friend," the Ayatollah, is actually an American plant.  This revelation is purposefully made so penetratingly public as to ensure that the  story reaches even the most isolated Taliban areas.  Of course, the junk shipments of military hardware would cease, but even more importantly, the current Taliban leaders would be portrayed as naive and undependable.
The already fractious coalition of insurgent groups which presently form the Taliban would be further fractured.  Some would choose to continue to support the existing leadership while others would begin thinking about an "even newer, new friend."
The Saudi royalty, the Taliban's past sponsors, are well known to be quite "gun shy" about regional Islamic armies being too well armed, so they have drawn back on their previous generosity as the Iraqi Ayatollah moved in as the central sponsor.
The Taliban who are ready to "move beyond" the old Taliban leadership -- the leadership which was so visibly tarnished by the  damning revelation in Iraq -- find themselves without a home.  Suddenly, the Pakistani government looks more like a friend than a foe.  U.S. aid flows into the Pakistani side of the border with the express purpose of increasing the services available in the tribal regions and the Swat valley.  This "fracture" is encouraged and strengthened by all sides.
TFP3 - Now, the part of the Taliban which is interested in becoming a political player in the Pakistani "democracy" is encouraged to campaign in Pakistani Parliamentary elections.  The remainder of the Taliban, now significantly smaller and less well supplied, continues the conflict in the tribal areas and Afghanistan.  However, there are now literally thousands of ex-Taliban fighters who might assist, especially with intelligence, both the Pakistani efforts to dislodge their indigenous insurgents and the NATO efforts on the far sie of the border with the same ambition. 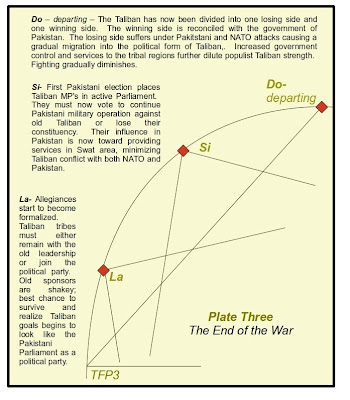 La - Properly managed, the "pro-government" side of the old Taliban can begin to offer the very material, real advantages to their position as "political Taliban" over the alternative "continuing to fight Taliban."  Of course, the Pakistani government and pro-government religious leaders in Pakistan must do everything possible to make this defection even more attractive to the Taliban who remain "on the fence."

The violent Taliban sect would probably begin to attempt to intimidate the off shoot group, but the numbers would be against them.  The Pakistani army would still be in the tribal areas looking for Taliban who were a threat to Pakistan.  This effort would easily merit increased U.S. and NATO support -- helicopters, intelligence sharing and so on.  Naturally, any advances toward extinguishing the Pakistani ISI's illicit collaboration with the Taliban would be positive, although even the ISI might find the altered political climate a sufficient motivation to rethink their alliances.
Si - Once the new political wing of the Taliban began to exert constituent interests in the Pakistani Parliament, the migration away from the violent jihadist faction might proceed even further.  If this development were coordinated with an aggressive repatriation scheme across the border in Afghanistan, the Taliban numbers could be reduced even further along with its popular support.  The obvious necessity of a functional, less corrupt Afghan government would be critical here.
Do departing - Our enneagram ends with an unlikely but quite satisfactory outcome.  Sporadic insurgent violence, similar to that in Iraq, will most likely continue, but the threat of a massive Taliban "take-over" of Afghanistan after NATO forces depart would be permanently eliminated.
The influence of ex-Taliban MP's in the Pakistani Parliament, MeanMesa thinks, would serve to mature the democratic institutions in that country.  The importance of reconciliation very often offers a foundation for a healthier nationalism than was possible during the dictatorship of the recently deposed autocrat.  A cessation of the necessity for a major military effort in the tribal areas could only help the Pakistani economy.
In one sense, Pakistan is too similar to most other places.  An operational, institutional democracy must be inclusive, whether it is convenient or not.  Further, the "home grown" variety of a democracy based on realism and necessity usually has the best chances of modernity and effectiveness.
Conclusion
MeanMesa does not suspect that the Taliban will be reading this post to gain access to the "secret plan."  Further, we already know that the US Defense Department doesn't solicit or accept "suggestions" from anyone but defense contractors and lobbyists.  Our State Department doesn't even answer the phone unless it's about a terrorist attack.
We only hope that our wonderful MeanMesa visitors will take a moment to consider a real alternative to our country's present course.  Don't forget the free offer of the "Enneagram Guidelines" paper!
Posted by Chad H at 11:36 PM