It's Time to Talk to the Neighbors!

Loyal MeanMesa visitors may have noticed a recent hiatus in postings on Short Current Essays.  The explanation is simple enough. We haven't just been watching daytime soaps and eating chocolate bon-bons.
MeanMesa has been out politickin'!
Yup, the mid-term election is creeping up on us, the Chamber of Commerce already has its hand on the flush lever for the millions of dollars foreign campaign contributions. Those throw backs are getting ready to dump cash driven lies into every corner of the democracy and our local, New Mexico candidates need all the help they can get.  MeanMesa has been door to door in the neighborhood, talking to voters and encouraging them to take the election seriously.
What else would anyone want to do besides wandering around on beautiful, New Mexico fall days?  Oooops.  There's also the little matter of saving the democracy.
A few weeks ago -- about the time that the story of all the millions of Karl Rove money broke -- we had a discouraging conversation with a young fellow.  He had decided that, in the face of gigantic campaign contributions from oil companies, pill makers, China and Saudi Arabia, there was little that could be done to put our electoral process back on the tracks.
Horse manure!
Of course, MeanMesa thought, "Well, we'll just call our broker and tell him to unleash a few million from our own investment accounts.  We'll show those darned plutocrats and Arabs."
However, on second thought, the chilling reality of the moment had a chance to sink through.  We have no broker.  We have no multi-million dollar investment accounts.  So what's left?
Whatever our effort is going to be, it is definitely  going to be a very low budget approach.
So, off we go!  We are going to need a couple of things to get this message out into the voting world.  A quick visit to the local Dollar General produced a nice, bargain priced tape dispenser and a healthy block of blank index cards.
The next step was to come up with a few solid campaign messages -- things that  would resonate with our great MeanMesa neighbors here in the apartment complex.  After all, the message wasn't going to be worth much if it didn't "zero in" on issues important to the folks who would be getting the cards.

Further, the plan needed to start early and keep going.  A single campaign issue delivered each week was going to have a lot more sway than a frantic, last minute assault.  The most important "anchors" for Democratic voters in this district are the races for New Mexico Governor, Diane Denish, and our district's Congressman, Martin Heinrich.  The idea is that is voters go to the polls for these two races, they will probably vote a Democratic ticket for the remainder of the contests.
Of course, the idea here is that you -- MeanMesa visitors  - CAN MAKE YOUR OWN CARDS!
Compose a nice message to support your own mid-term election candidates, print a hundred of them on your computer printer and pass them out!  The actual cards offered below as examples contained MeanMesa's name and phone number along with a personal signature -- all included just to make sure the reader knew it was a personal message and not just more mass produced  campaign drivel for "name recognition."  (It's not a good idea to post your phone number in the blogsphere, so we replaced that data with "MeanMesa*" on the example cards.)
Doing the straight "name recognition" approach insults your neighbors' capacity to actually consider the material issues at play.  Leave that approach to the Republican Chamber of Commerce crowd.  Count on it, they will be out in force with their millions of foreign campaign dollars soon enough.

Here are the cards MeanMesa has been handing out for the last month and a half.  We've registered 22 new voters and supplied 2 applications for absentee ballots so far.  Remember -- EVERY VOTE COUNTS!  New Mexico went for George Bush Jr. on fewer than 400 votes! 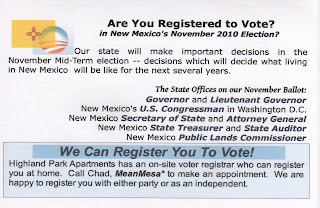 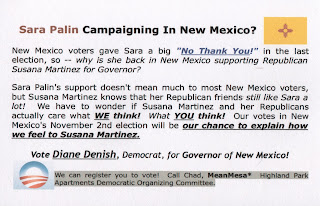 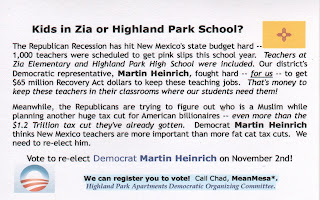 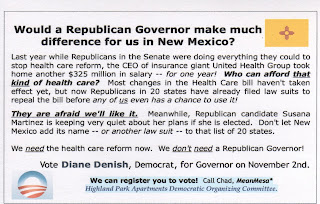 The two most recent cards (below) were printed on both sides -- something of a new accomplishment for MeanMesa's technical prowess. 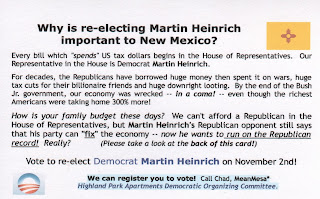 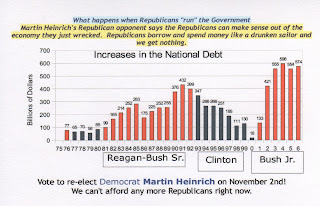 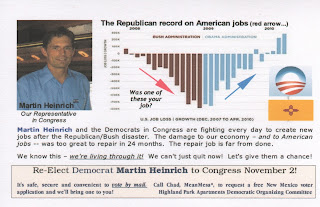 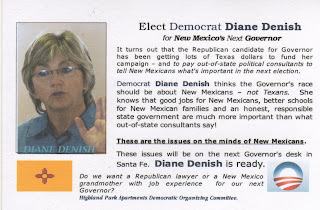 So, what's the message here?
Simple.  Quit feeling desperate and GET BUSY!  Remember -- YOU CAN MAKE ALL THOSE FOREIGN CAMPAIGN DOLLARS WORTH NOTHING!
The one thing all those neo-cons DON'T HAVE is a "boots on the ground" commitment.  Dollars don't buy votes -- dollars just buy more television ads!  A simple, honest, neighbor to neighbor message is worth more than the most expensive, professional attack ad.
Go to work!
Posted by Chad H at 11:41 AM