MeanMesa is listening to the new Congress explain that there is absolutely nothing which can possibly be important for the American government besides  corporate tax cuts and spending reduction for all the services now needed after the last looting festival. This is precisely the stifling, suffocating plunge back into the medieval manure that the corporately choreographed tea bags and hill billies are raging over at the moment.
"Heh, heh.  Yew kin stop rah't theah.  Yew kin ferget them rockets. We ain't doin' nothin' 'sides lower'n taxes 'n cuttin' spendin'!"
Does anyone think there might be more to be added to the history of the United States than such a dark little vision?  The new Republican Chairman of the Science and Technology Committee is an 87 year old oil man from Texas.  MeanMesa thinks that the only rocket Representative Hall likes very much is  one carrying an H-bomb.
Maybe the United States has just elected a ground based, non-orbital, anti-exploration House of Representatives?  Rush Limbaugh's wet dream?
The news isn't all bleak.  President Obama apparently saw this coming.  MeanMesa is posting the following article from Scientific American which outlines the administration's "damage control" gambit.  (read the whole article here)

Defying Politics: Why the Obama Plan Is Good for NASA 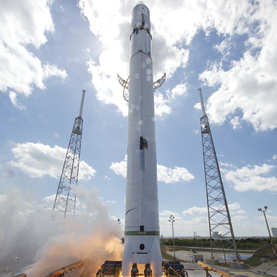 Orbital: NASA may send astronauts aloft in commercially owned rockets like SpaceX's Falcon 9, which was test-fired in March. Image: Courtesy of Chris Thompson SpaceX
A crisis at NASA forces a new president to take action. A panel issues a report. The president gives a speech. He directs NASA to find a better way to get astronauts into orbit and to encourage private companies to enter the space taxi business. The plan promises to be the biggest shake-up of the space program since the glory days of the moon landings. Some embrace it; others take a dislike.
So it was with President George W. Bush’s vision for NASA in 2004, which sought to rekindle the agency’s exploratory spirit after the space shuttle Columbia disaster. The plan, though, fell apart when Bush failed to come through with the money to implement it. And so President Barack Obama came into office, found NASA in dire straits, commissioned a panel, led by aerospace veteran Norman Augustine, to work the problem, and made a big speech in April. How will the story end this time? Only strong presidential follow-through can keep NASA on course.
Obama proposed jettisoning much of the Constellation program, which Bush set up to build rockets and Apollo-like capsules to replace the space shuttle, and instead paying private companies such as Elon Musk’s SpaceX to launch astronauts into orbit. He also relaxed Bush’s deadlines to return to the moon, refocusing on what the Augustine commission called a “flexible path” of incrementally more difficult missions to asteroids and ultimately Mars [see “Jump-Starting the Orbital Economy,” by David H. Freedman].
For supporters of Constellation, the proposal was a call to arms. Even the reclusive Neil Armstrong came out to question it, and over the summer Congress tore it apart. The Senate agreed to a stripped-down version; the House of Representatives rejected it altogether. As an end-of-September fiscal deadline loomed, the House caved in and went along with the Senate.
Leaving aside the politics, the disagreement hinged on a genuine dilemma. Skeptics of the plan say that private companies are unproved. Proponents worry that keeping Constellation alive would be throwing good money after bad. Better to fund entrepreneurs who can drive down the cost of orbital launches.
Both sides have a point, but what tilts the balance in favor of Obama’s plan is that we can’t really “leave aside the politics.” For Congress, NASA is not solely—or even primarily—a space agency. It is also a jobs agency, an industrial policy agency and a foreign policy agency. These ulterior motives keep getting in the way of good engineering. For instance, Obama had proposed undertaking basic technology development and only then deciding on the design for a new heavy-lift rocket, but the Senate insisted that NASA build the rocket with existing technology—which preserves jobs, even if it raises costs and hampers innovation in the long term.
The charm of Obama’s plan is that it seeks to disentangle NASA from these vested interests. NASA will set the price and technical specifications of orbital launches and leave the details to private enterprise. It will be able to spread its eggs among many baskets rather than putting them in one. The plan thus fights the political pressures with the only force that might be more powerful: the profit motive. Space businesses have a strong incentive to buy equipment and hire people for their technical merit rather than because their congressional representative was able to bring home the bacon. That’s one reason why Obama’s plan met with so much opposition. Still, Congress ended up mostly going along with it—and that will help to let NASA be NASA.
Bush’s plan failed for lack of follow-through, and if Obama’s is not to do the same, he must keep pushing for more reforms. The first goal should be to fix the flaws in the plan that Congress has enacted, beginning with the lack of sufficient funds for technology development. If NASA were more consistent about investing in new technology, future missions could pull what they need off the shelf and would have a fighting chance of staying on budget. More broadly, Congress must find a way to give NASA some stability of funding and purpose. The Augustine Commission pointed out that NASA has been hobbled by “recurring budget ambiguities” and congressional micromanagement. The agency needs greater autonomy, perhaps even a dedicated funding stream.
The specific plan—be it Bush’s, Obama’s or whoever’s—doesn’t matter. Where politicians have failed NASA is in not letting it do its job. Engineers will make mistakes, but engineers learn from their mistakes. It is time for politicians to do the same.