MeanMesa's on-going penchant for railing about the rise of  the American oligarchy is hardly "late breaking news." Still, some very interesting information surfaced recently on our faceBook account which is important enough to share here on Short Current Essays.
The bumbling MeanMesa communications technology has been unable to provide an operational link directly to the source document, but any visitor who cares to view the original can reach it through this faceBook link to my wall. MeanMesa's thanks to Daniel Secrist who first posted the link.
The sources cited for the information in the chart are interesting.  They range from the CIA Factbook to UNICEF to Kings College, that is, they range pretty convincingly through a robust spectrum of data from both conservative and liberal institutions.  Also of interest is the unique collection of categories for the columns of data presented for each of the countries analyzed in the chart.
Because the actual graphics were not suited for insertion in the blogger format, the chart is regenerated here.  The original column headings had to be abbreviated, but the descriptions provided in the original are provided below.  Please take a look before you try to interpret the chart data.
The following index will explain the labels at the top of the chart.
Wealth
Income inequality (Gini index)  Higher numbers indicate more income inequality.
Unemployment
The unemployment rate - most recent estimates.
Democracy
The Level of Democracy -- (Scale 1 to 10, 10 is most democratic)
Well Being
The Gallup Global Wellbeing Index (percentage thriving, 2010)
Food
Food Insecurity "Have there been times in the past 12 months when you did not have enough money to buy food that you or your family needed."  Percentage answering yes.
Life Times
Life Expectancy at birth.
Prisoners
Prison population per 100,000 citizens.
Math Grades
Student performance - Math Scale Store
Science Grades 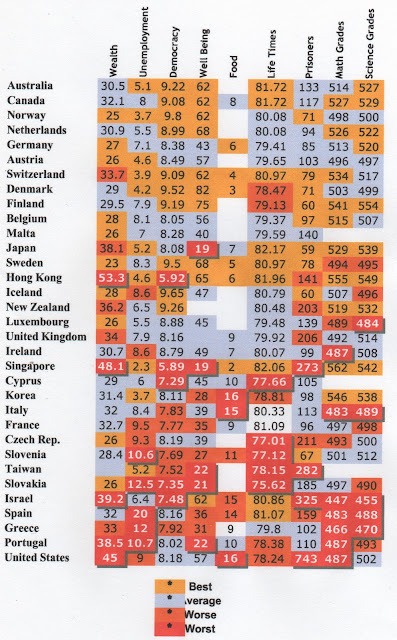 Sources:
The overall picture of global oligarchy profiled in these data is unsettling, indeed.  MeanMesa visitors, stalwart pursuers of media source credibility that they are, are not surprised at the dismal state of wealth inequality around the economically developed nations of the planet.  We have watched the relentless moves to concentrate all "extractable" wealth into the pockets of the ruling class for some years already.
Worse, we have watched this process be cleverly redefined in the oligarchic media, always presented as something besides what the facts might suggest.  We now find ourselves in a world populated with "media consumers" who have  actually believed all this "mouth junk"as it has been trotted out under the disguise of the exclusive truth.
Yet, here are the numbers.

Visitors to this blog have previously been presented with the scope of the radical redistribution of national wealth to our latest crop of well-fed billionaires.  We see more examples of the process with every day's "news."  The example are now legion.


Senator Sanders tells us about the top 400 richest Americans with increases to their personal wealth of $630 Bn during the reign of the autocracy [W].  Hartmann routinely reminds us that the top "earners" in the country enjoy over 80% of the annual total while the lowest 80% share less than 10%.  We watch in disgust as Wisconsin Governor Walker, the product of Koch Brother millions channelled through a Citizens United-style "cash laundromat,"  brazenly lurches forward with his plan to destroy organized labor.
All these outrages which are accompanied by dollar signs are only the "easy part" of the campaign to permanently destroy our democracy.  When we penetrate this swamp only a couple of inches deeper, we see that the destructive effects of this well organized effort creates a literal shocking cloud of even more associated bad results.  These are not nice people.
Perhaps the most puzzling of all the aspects of the scheme is the mysterious willingness of these social and economic psychopaths to risk the violent civil unrest which will be the unavoidable progeny of their "class war."  They are already wealthy and powerful beyond measure, yet their avarice seems to compel them "wring out the cloth" even more.  Apparently it has not yet occurred to them that their parasitic model will fall apart when they have finally starved their victim to death.
Spend a few minutes reviewing the information in the chart.  Spend a few more minutes letting these numbers "soak in."  Make your own conclusions about where this out-of-control Juggernaut is heading.
If you are willing to ride this thing all the way to the inevitable train wreck, just relax.  If you are not, do something.
Posted by Chad H at 9:40 AM