MeanMesa would like to take this opportunity to visit the long suffering Patriot from California who has become the Chairman of the House Oversight and Government Reform Committee, the Honorable, Mr. Darrell Issa.  Of course, any MeanMesa visitor might be wondering "Why would I be interested in another dirty shirt neo-con from California?"
Simply because he is creepier than the other denizens of the freak show?
Oh, maybe.  However, Mr. Issa has meticulously set himself even above the grotesque norm when it comes to wing-nut GopCons.  Mr. Issa has been repeatedly promising his BagCon constituents that he intends "investigate the hell out of" all the favorite targets of the right wing once he has the power.  Now, of course, he has the power.
So, in the jobless aftermath of a tanked economy, Mr. Issa has begun his preliminary work on impeaching the President for "high crimes and misdemeanors" just as the process is spelled out in our Constitution.  For those of us who remember the "Kenneth Starr March to the Sea" during the Clinton Presidency, the details of this more modern rehash of the same tired story doesn't bode well for a productive Congress.
Illustration by Andrew Zbihlyj,
Source Photo: Louie Palu/Zuma Press
Now, Darrell has already been a busy little guy.  One of the very first items of business on his plate -- even before his boxes had been unpacked -- was a quick letter to every "friend" his lobbyist staff could think of who might be willing to pony up a few "campaign contribution"  bucks to get rid of some regulation or other.  Of course, this skanky little maneuver might look relatively decent to the information challenged voter, but under the relentless, microscopic eye of Short Current Essays, Mr. Issa's "feet of clay" begin to melt instantly.
As our esteemed Mullah Nassr Edin might have said, "Gadzooks!  What a crook!" 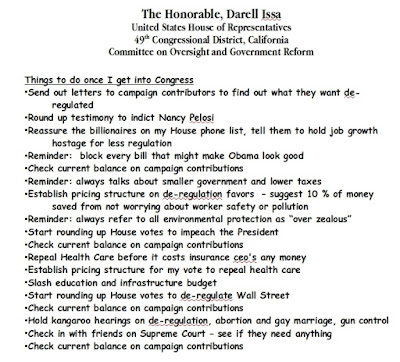 My, oh, my.  Where could such a nasty little fellow have come from in the first place?  Rather than ranting on for another six pages, let's take a look at Mr. Issa's background.  You know, his "free market" experience which has prepared him so well for this job.  It won't take much more Googling than a quick trip to Wikipedia.  (Read the entire entry here.)
Long-Suffering Republican Patriot, Darrel Issa
Following the 2010 elections, Issa sent a letter to "more than 150 trade associations, companies and think tanks," including "the oil industry, drug manufacturers and other trade groups and companies" asking them "to tell him which Obama administration regulations to target" in the upcoming Congress.[34] Critics have charged that Issa was "embracing regulatory capture."[35] Elijah Cummings, the ranking member of the House Committee on Oversight and Government Reform, said Issa's letters were tantamount to “inviting businesses to tell us what they want us to do as opposed to protecting the American people.”[36]
Issa dropped out of high school and enlisted for a three-year tour in the Army on his 17th birthday.[3][4] He served as an Explosive Ordnance Disposal (EOD) technician, defusing bombs, after having been shown a movie about soldiers in that specialty during World War II. He would later claim his unit had provided security for President Richard Nixon, sweeping stadiums for bombs prior to games in the 1971 World Series, and that he had always received the highest approval ratings during his service.[5] A 1998 investigation by the San Francisco Examiner found that these claims were not true: Nixon did not attend any of that year's World Series games, and at one point Issa was transferred to a supply depot after receiving an unsatisfactory evaluation. According to Issa, the Examiner reporter had misunderstood an anecdote he had related.[3]
A fellow soldier, Jay Bergey, claimed that Issa stole his Dodge Charger in 1971 while they were serving together and that, the day after he confronted Issa, the car was found abandoned on a nearby expressway. Asked about this charge in 2011, Issa denied it and suggested it was possible that other soldiers stole the car or that Bergey, whom he claims had a drinking problem, had abandoned it himself while intoxicated."[3]
After receiving a hardship discharge in 1972 following his father's heart attack, Issa earned his General Educational Development (GED) certificate and began taking classes at Siena Heights University, a small Catholic college in Adrian, Michigan. He continued his military service in the Reserve Officer Training Corps (ROTC)."[3]
Twice during that year he was arrested. In March, Issa and his brother William were charged with stealing a Maserati from a dealer's showroom in Cleveland. Issa says it was a matter of mistaken identity by the Cleveland Heights police; the case was later dismissed.[3]
Before that had happened, in December 1972, police in Adrian pulled Issa over for going the wrong way on a one-way street and, as he was retrieving his registration, saw in the car's glove compartment what turned out to be a .25-caliber Colt automatic handgun inside an ammunition box, along with a military pouch containing 44 rounds, a tear gas gun and two rounds for that. Issa was charged with carrying a concealed weapon
He was sentenced to six months' probation and paid a small fine.[3].[6] At the time Issa told police that Ohio law allowed such possession of a handgun with a justification; his was the need to protect the car and himself. Years later, he said that the car and gun were his brother's, which William Issa supported. He had been unaware of the gun's presence when inadvertently driving the car the wrong way down the alley and that, to the extent of his knowledge, there had been no ammunition present. The entire incident, he had believed, had been expunged.[3]
Issa later transferred to Kent State University, where he completed his studies. His brother William believes this period shaped Issa's conservatism, in contrast to the leftism that prevailed among much of the student body there. After graduating with a degree in business administration in 1976, he returned to active Army service as an officer.[3]
So, after the onslaught begins and Mr. Issa and his cronies have begun their highest priority Congressional "work" of impeaching the President and indicting every other Democrat standing still long enough to be dragged into a Grand Jury, let's not be confused about the little House member at the helm of the effort.


Thanks!  All you half-wit California tea baggers!
Posted by Chad H at 11:05 AM