Duplicating the Final Damage of the Great Republican Depression

The "illegal history" of the last Great Republican Depression in the 1930's includes an account of the, then President, Franklin Roosevelt's efforts to inject money back into the economy through government spending. FDR, being a "man of the people," was focused on jobs, and when he watched the unemployment rates skyrocket after the Wall Street looting had finally collapsed, he rightly concluded that the economy wouldn't "run" primarily because the "cash register was empty."

President Roosevelt began to remedy this situation with unprecedented levels of government spending. Not being a "supply sider" who was anxious to blame the catastrophe on over regulation of the brokers, etc., he knew that the economic problem the country was facing was, instead, essentially a "demand side" type problem.

That was, the economy wasn't working because the unemployed population had no money to spend, and that was because all the money the population might have had, normally, had wound up in the pockets of the billionaires of the day who had manipulated and exploited not only every "insider trading" possibility but had also enjoyed a "carte blanch" cover from their wholly owned Senators during the process.
Things began to improve right away as the new money from Roosevelt's spending plan began to, once again, lubricate the broken economy.
However, the billionaires' Senators bucked as soon as possible. They had always thought that this money being pumped into the pockets of the population to get the demand side of things going again actually belonged to their bosses, the billionaires. Cynically working together, they stopped the spending plan long before the economy had actually recovered all that much.
Predictably, unemployment began to rise, once again, and the economic factors began to collapse, once again. It was their hope, of course, that this sudden down turn in events would spell the end of the Roosevelt Presidency at the next election.  Then, as now, the Republicans of the day considered an economic tragedy to be "good politics."
That is, "good politics" because the horrible suffering of the population could be more easily maneuvered into an election victory than any actual good ideas.  That latter alternative simply required too much sacrifice both in terms of  the risky campaign efforts associated with trying to sell more terror to the voters and in terms of how many dollars would risk being removed from the pockets of the billionaires where, of course, those dollars belonged all the time, anyway.
It was the view of the billionaires that the Roosevelt Recovery must be stopped at any price.  The great threat to the billionaires' future was that Roosevelt, their sworn enemy, would become so popular with the voters that he would be re-elected, term after term.  Ooops.
Now, MeanMesa could "mangle" its way through all this given a long enough posting plus enough patient visitors, but, after Googling just a wee bit, we've found a great article which directly addresses this problem explanation.  And, not only a great article, but a comment to it -- in disagreement -- which is also great, followed by the article's author's response.
All three of these parts can help prepare MeanMesa visitors for the "water cooler" wars which are almost inevitably approaching, given the current "title holders" of the Peoples' House in DC.  Our sincere thanks both to Tom Swiss the author (proprietor of unreasonable.org) and to the "counter commenter," Peter Lunicks.  The point?  We are watching the an exact copy of this "snatching defeat from the jaws of victory" episode at this very moment. 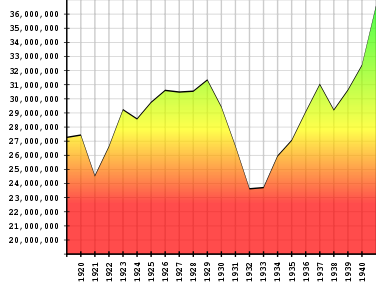 With talk of federal spending to help the economic recovery, it's become a right-wing talking point that FDR's New Deal didn't work.
Like most talking points from right-wing pundits these days, it's a bunch of malarkey.
Employment began to recover in FDR's first term. By 1937, the labor force had reached just short of the boom's 1929 peak.
In 1937, conservative opposition slowed New Deal projects - and employment fell again, though not as steeply. Opposition ebbed, the New Deal was strengthened, and employment recovered to higher than 1929 levels - and was trending still higher - by 1940, before the U.S. entry into WWII. (Note this chart shows non-farm, non-WPA employment.) 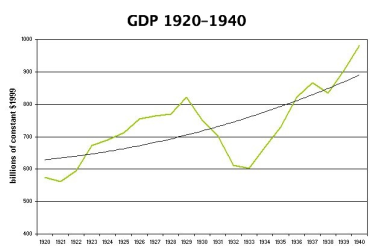 The same pattern can be seen in GDP and in industrial production - a turn-around from sharp decline to sharp rise when the New Deal was implemented, a fall-off at the start of FDR's second term when opposition slowed it, but a still a full recovery before WWII.
GDP (constant dollars) was higher in 1937, and in every subsequent year, that it was in 1929 - an argument can be made that the Depression ended in 1937, and was followed by a milder recession brought on by the slowing of New Deal projects. 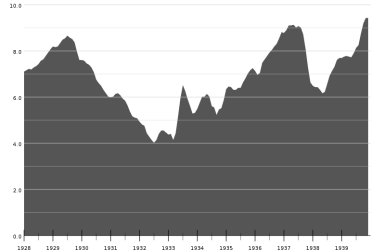 Now, the New Deal wasn't magic; it couldn't instantly fix an economic instability caused by years of speculative capitalism, plus a declining agricultural export market (as Europe recovered from WWI) along with a decrease in farm employment from increased mechanization - not to mention the effects of the Dust Bowl. But the numbers clearly show that the New Deal did a lot of good for the economy.

did the New Deal work?

Employment began to recover in FDR's first term. By 1937, the labor force had reached just short of the boom's 1929 peak. In 1937, conservative opposition slowed New Deal projects - and employment fell again, though not as steeply. Opposition ebbed, the New Deal was strengthened, and employment recovered to higher than 1929 levels - and was trending still higher - by 1940, before the U.S. entry into WWII. (Note this chart shows non-farm, non-WPA employment.)

First, government spending -- and false credit in general -- creates artificial booms. These booms necessarily (this is what is meant by the term 'economic law') must collapse into a bust. The history of the last 150-200 years -- since the advent of the central bank -- can be charted in terms of these booms and busts. This fact is especially evident in the current crisis, the result of excessive creation of money and irresponsible lending, brought on largely by government requirements and government-imposed incentives to irresponsible and unsound economic actions.
Second, no, employment didn't really recover under Roosevelt. The official figures of unemployment, of course, include people employed by government make-work spending programs; hence, that they are not an accurate measure of the true, long-term, meaningful recovery of the economy per se. They are an illusion, a temporary boom created by irresponsible spending -- and the bubble popped. The economy, including unemployment, was worse in 1938 than at any other time since the Depression began.
No, it wasn't the New Deal that ended the Great Depression, nor was it the War.

It was the end of the war.


Yes, there were periods from 1932-1944 where some of the symptoms of the Depression were diminished, but the Depression did not truly end until the War ended. Does treating the symptoms of a disease cure the disease? No, but it can create the impression that the disease is improving, even if it's not. If not because of the New Deal, and not because of the War, why did the Depression end?
During the war, the greater part of government spending was diverted from domestic make-work projects was diverted toward war spending. This in itself did not end the Depression -- rather, it prolonged it. The War, however, unlike the New Deal, had a real end in sight -- victory was defined and was eventually achieved. With victory, military spending of course was lessened, and most of the New Deal programs were not brought back. The end of these programs freed up an enormous amount of private capital for private investment, business, individual investment, etc., allowing the market to recover and putting the Depression behind us.

Tom Swiss [ 20 December 2008 - 10:27am ]
Unemployment and economic stagnation are not just "symptoms", they are the disease itself.
As I pointed out, the employment figures charted above are non-farm, non-WPA employment. So they do not include those "employed by government make-work spending programs". (Not that constructing public roads, buildings, and utilities should be considered "make-work".)
And the boom and bust caused by government spending is no more "artificial" than that caused by speculators running hot or cold. The cycle is inherent in capitalism; the New Deal saved capitalism from itself.
If you want to get rid of that cycle, we need to end capitalism. As a libertarian socialist I'm all in favor of that - but it needs to be a slow process of building a better way. A sudden collapse of a socioeconomic system is more likely to lead to tyranny than to liberty, as desperate people turn to strongmen to "restore order" and the like.
Tom Swiss - proprietor, unreasonable.org

MeanMesa's compliments to the President.