Rolling along unnoticed at the side of what is unfolding in Madison, the Congressional GOPCon (RINO's - Republican In Name Only) scheme to redefine debt and wealth is churning along under full steam.  The spokesmen charged with the task of selling this train wreck as anything by the direct redistribution of wealth -- upward, ever upward -- are the same schills who created most of the debt in the first place.  "Created?"  Yes, the loudest right wing stooges are exactly the same ones who voted all this di$a$ter into law during the autocracy.
The strategy so carefully formulated by miscreants such as the national socialist Koch Brothers and the high tech image manipulators at Dick Armey's Freedom Works is to extract the last little dab of cash left in the Treasury, give it to the oligarchs, then leave the bill with lower class tax payers.  Those of us in the lower class are already familiar with this scheme.
"Lower Class?"  What the hell does MeanMesa mean with such an inflammatory term?
Heh, heh, heh.  MeanMesa said it, and MeanMesa "owns" it.
The top 3% of "earners" enjoy slightly more than 80% of all that's earned.  The lower 80% of earners share 7%.  In "MeanMesa talk," this spells "l-o-w-e-r ... c-l-a-s-s ,"  and it is a "spelling" which requires no hyperbole, either.
The GOPCon tirade has been presented with plenty of hollowed out Tea Bag threats.  The most menacing of these threats is a government shut down unless the Congressional Democrats agree to slash every nickel which isn't bolted down, which, of course, refers to not bolted down to military spending and other neo-con favorites.  You know, stuff like food stamps, heating assistance, pre-school education and stuff like that. 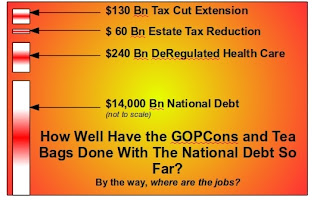 Well, the "shut down the government" threat seems to be gaining traction among the new Congressional GOPConBags.  This isn't too surprising.  The plan has always had disastrous results for the neo-cons in the past, so there should be little surprise that its main features attract them again, today.
Because MeanMesa's neighbors rely on many of these "soon to be eliminated" government safety nets, we issued another index card message a few weeks ago.  The card is shared here with the idea that MeanMesa visitors may wish to use it to warn their own neighbors about this latest GOPCon wealth redistribution attack.
So, download it, change what needs to be customized for your own neighborhood, print up a couple of hundred on 4" x 6" index cards and spread the word!
Posted by Chad H at 11:23 PM