The Chaos Raging Just Beneath the Surface of US Economy

MeanMesa, rolling along comfortably on the memories of decades of the US economy's "ups and downs," is experiencing an eerie, other worldly inability to calm down amid our domestic economic situation.  Further, this unsettled sensation doesn't derive from a solitary study we've accidentally encountered somewhere.
Instead, it's a feeling based more on the sensation one might experience while watching the surf withdraw moments before a gigantic tsunami.  If there are any discernible intuitions which might validate this mental phenomenon, they are far more like the cock roaches rushing from under an over turned box or the weeds which seemed to sprout everywhere after the first spring rain.
Creepy?  It's better if it is, actually, creepy.  For what it's worth, that "creepy" comes from having experienced too much history here.
Plenty of Americans -- especially the ones who actually care enough about the country to keep track of what's happening -- are well aware of the calamitous wealth redistribution which has been under way since the days of Reagan.  Yet, as if these citizens had been hypnotized, the normally anticipated revolutionary fervor remains mysteriously dormant.
Now, MeanMesa could ramble on about all of this for a few thousand words, trying to incorporate into the fray a tid bit from here and a tid bit from there, finally making some meat handed attempt to consolidate all the loose facts into some kind of comprehensible argument.  However, rather than subject our wonderful visitors to such a "dental visit," MeanMesa will happily present the following, high class, well organized information block.
What follow comes from two great sources, both hosted on the Mother Jones site's Plutocracy Now page.
Take a look at the whole Mother Jones  article:

Plutocracy Now: What Wisconsin Is Really About

Link here.
And, to see the charts and graphs,

It's the Inequality, Stupid 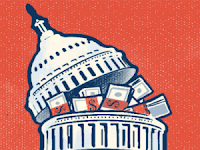 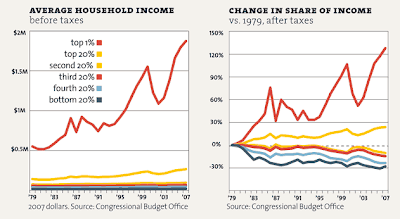 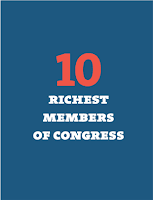 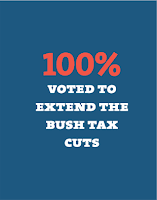 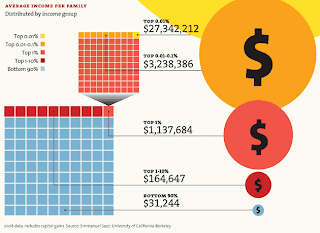 For a healthy (wealthy) few, it's getting better all the time.  Americans clearly have a profound misconception about the seriousness of this.  As the wealthiest among us rage forward to accumulate more and more of the nation's economic "blood flow" into their "McDuck Money Bins," much of which comes directly or indirectly from Congressional corruption -- our tax money -- under the cover of their carefully purchased neo-con Senators and House members, we see our own dreams swirling down the drain to the plutocrats' cess pool with them.

Further, even though the possibility is an appealing one, all of this cannot be solved in a single, glorious bout of conspiracy revelations or a tidy, "start to finish" court case of some kind.  The initial steps for this crime amounted to changing the law to make it not criminal at all.  Following this first, now ancient outrage, additional work was patiently plied onto the sandwich to create consequences even more grave.

A decades long "dumbing down" process was immediately begun to remove any possible remaining "teeth" normally found in an electorate.  Civics classes were prohibited.  Text books became wrestling arenas for throw back Texas ideology.  Graduation rates plummeted.  Worse, the old incentives for being smart and clever disappeared with the jobs which used to accompany such effort.

The acquisition of the domestic media further aggravated the decline.  Hate and fear became the corporate profit centers for a few anti-democratic oligarchs  who were able to purchase the alphabet networks, psychopathic crooks such as the heavily soiled Australian fascist Rupert Murdoch and his equally detestable Saudi Wahhabist Prince and corporate bedmate.  The "up is down" business model exploded among a cynical, uninformed, uneducated and uninterested population from there.

What can be done?

Unhappily, almost nothing can be done immediately.  The "gang rape truth crowd" is well funded, well fortified and well protected at this point.  In fact, these tortured souls have set a new, sickening example of just how wretched mentally deranged greed and recklessness can become.  Incomprehensible avarice and down right meanness has saturated the government with the predictable outcome of national wealth flowing unchecked into the pockets of those with the ambition of becoming our new masters.

Historically, such a cheap scheme would have been thrown out by its victims, but this time, the victims have been craftily groomed into a state of eerie, almost enthusiastic willingness for more of the deception and destruction.

What can be done?

The question of "What can be done" has become the question of "what is it still possible to do" in the 2012 election.  Many of the non-participatory indulgences of "sending a message" or simply "staying home" are no longer comfortable -- or available -- alternatives.

It's going to take a great deal more effort in our political responsibilities if we intend to keep living here.  We've been served our national foreclosure notice, and we recognize the names of those who have signed the letter.  Our eviction is scheduled for December, 2012.