The news from Japan has had the predictable result of inflaming nuclear energy haters world wide and especially in the United States.  The argument is all too familiar now.

As is the case with most populist, media inspired logic, the argument begins to break down immediately when a few facts are applied.  Of course we would all prefer a nice, clean, renewable option in the matter, but when that choice is not one which we actually have, we are left with the prospect of choosing something that we do have.


This posting is, hopefully, a chance to look over the choices which are actually "on the table" given the political, technical and economic realities of the moment.

Typical U.S. nuclear power plants have net summer capacities between about 500 and 1300 MW.
Apples and Oranges Energy Wise
There are several concepts floating around which are highly relevant to a discussion such as this one, and we have been hearing about them as parts of the Obama administration "wish list" for a comprehensive energy plan.  We can take an abbreviated glimpse of these basic ideas before we jump into the three articles posted below.
1. Previously, there has always been a "great divide" between fuel and energy.  Fuel meant all the aspects of petroleum, crude oil, refineries, gasoline and the like.  Energy meant, regardless of its origin, electricity to run in households, factories, irrigation and all sorts of other uses.  The "great divide" is getting much narrower.
2. Most of the energy generation in the modern world comes from coal.  Of course, there are alternatives at play (see chart above), but the main source of electrical energy has always been coal fired, steam generation.  There is plenty of coal.  All of it is an environmental disaster, even though serious work is being done to make its use less destructive.
3. With the gradual advance of a "post peak oil" situation, a natural interest in converting the power source requirements previously met by petroleum use to alternative electrical sources is growing.
4. Renewable energy is becoming more economical, and hence, attractive as this world wide train wreck approaches its inevitable demise.  However, two great obstacles confront this conversion:   a.) existing power grids are unable to distribute renewable source power effectively, and, b.) the maximum scope of renewable power in the immediate future falls far short of the world's energy consumption levels.
5. There is no shortage of very bad players in the game.  The coal and petroleum industry lobbyists will fight to the death to delay and retard the conversion to alternate energy forms.  Nuclear is the present victim of a remarkably vast public outrage, not all of which is undeserved.  Still, we must remember that the Japanese plants having all the trouble now were designed to end power production 20 years ago.  The criticism of nuclear energy has more to do with the very bad habits of nuclear plant owners and managers than with the basic process itself.
For a little extra reading, check out MeanMesa's post on this topic from February 2010:


Hey Buddy, Can You Spare Neutron?


If You Want Electric Cars, You Need Electricity

The Coal Truth: Will the Coming Generation of Electric Cars Just Be Coal-Burners, Once Removed?

Some analysts expect that existing grid capacity may be enough to power U.S. electric cars in the near future, yet they do not rule out the possibility of new coal or nuclear plants coming on line if renewable energy sources are not developed.
| May 4, 2010 |
Coal-fired power -- albeit indirectly used -- will be the predominant source of electricity used by electric and plug-in hybrid cars unless we begin to source significant amounts of electricity from renewables like solar and wind. Pictured: the Virginia Electric and Power Company's Mount Storm coal-fired power plant in northeastern West Virginia.
Dear EarthTalk: Isn’t the interest in electric cars and plug-in hybrids going to spur increased reliance on coal as a power source? And is that really any better than gasoline/oil in terms of environmental impact?
—Graham Rankin, via e-mail
It’s true that the advent of electric cars is not necessarily a boon for the environment if it means simply trading our reliance on one fossil fuel—oil, from which gasoline is distilled—for an even dirtier one: coal, which is burned to create electricity.

The mining of coal is an ugly and environmentally destructive process. And, according to the U.S. Environmental Protection Agency (EPA) burning the substance in power plants sends some 48 tons of mercury—a known neurotoxin—into Americans’ air and water every year (1999 figures, the latest year for which data are available). Furthermore, coal burning contributes some 40 percent of total U.S. carbon dioxide emissions. The National Academy of Sciences (NAS) estimates that coal mining and burning cause a whopping $62 billion worth of environmental damage every year in the U.S. alone, not to mention its profound impact on our health.

Upwards of half of all the electricity in the U.S. is derived from coal, while the figure is estimated to be around 70 percent in China. As for Europe, the United Kingdom gets more than a third of its electricity from coal, while Italy plans to double its consumption of coal for electricity production within five years to account for some 33 percent of its own electricity needs. Several other countries in Europe, where green sentiment runs deep but economics still rule the roost, are also stockpiling coal and building more power plants to burn it in the face of an ever-increasing thirst for cheap and abundant electricity.

On top of this trend, dozens of electric and plug-in hybrid cars are in the works from the world’s carmakers. It stands to reason that, unless we start to source significant amounts of electricity from renewables (solar, wind, etc.), coal-fired plants will not only continue but may actually increase their discharges of mercury, carbon dioxide and other toxins due to greater numbers of electric cars on the road.

Some analysts expect that existing electricity capacity in the U.S. may be enough to power America’s electric cars in the near future, but don’t rule out the possibility of new coal plants (or new nuclear power plants) coming on line to fill the gap if we don’t make haste in developing alternate sources for generating electrical energy. And while proponents of energy efficiency believe we can go a long way by making our electric grids “smarter” through the use of monitoring technologies that can dole out power when it is most plentiful and cheap (usually the middle of the night), others doubt that existing capacity will be able to handle the load placed on even an intelligent “smart grid” distribution network.

Environmentalists—as well as many politicians and policymakers—maintain that the only viable, long-term solution is to spur on the development of renewable energy sources. Not long ago, the concept of an all-electric car charged up by solar power or some other form of clean renewable energy was nothing but a pipe dream. Today, though, such a scenario is within the realm of the possible, but only if everyone does their part to demand that our utilities bring more green power on line.
CONTACTS: EPA/mercury emissions; www.epa.gov/ttn/atw/utility/hgwhitepaperfinal.pdf
EarthTalk is produced by E/The Environmental Magazine.
GOT AN ENVIRONMENTAL QUESTION? Send it to: EarthTalk,
c/o E/The Environmental Magazine, P.O. Box 5098, Westport, CT 06881;
submit it at: www.emagazine.com/earthtalk/thisweek/,
or e-mail: earthtalk@emagazine.com.
Read past columns at: www.emagazine.com/earthtalk/archives.php
February 17, 2009, 5:33 am
Third Article: New York Times -- source


Electric Cars and a Smarter Grid 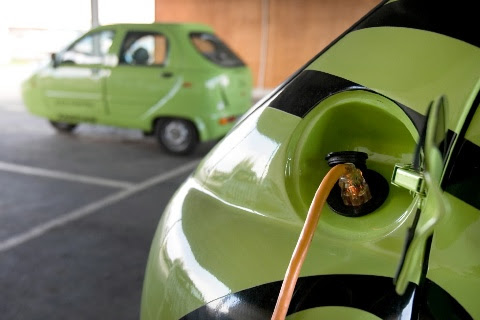 Peter DaSilva for The New York TimesZapcar electric cars charging in Califorina. Analysts are sanguine about this kind of thing becoming more common — someday.
Electric cars and a smart electric grid have a bright future, according to panelists at a roundtable discussion on the subject that I attended last Friday in Boston.
“I would say that electricity is a vastly superior fuel for the light vehicle fleet,” said Willett Kempton, a professor and alternative energy specialist at the University of Delaware.
And in a true smart grid, electric cars will not only be able to draw on electricity to run their motors, they will also be able to do the reverse: send electricity stored in their batteries back into the grid when it is needed. In effect, cars would be acting like tiny power stations.
“Most days, most cars are going to have lots of extra battery capacity,” said Mr. Kempton, noting that on average, American automobiles get driven for just one hour each day. Electrifying the entire vehicle fleet would provide more than three times the U.S.’s power generation, he said.
The Federal Energy Regulatory Commission, which regulates interstate transmission of electricity, is on board with the idea.
“Vehicle-to-grid is, I believe, the salvation of the automotive industry in the United States,” declared Marc Spitzer, an agency commissioner who was also on the panel.
Sven Thesen, the communication and technology director for Better Place, a start-up that is gaining traction (see this recent New York Times article) in its effort to create a network for electric cars in various countries, likened the concept of electric cars to cellphones.
“Fifteen years ago, how many people had a cellphone?” he asked.
Now, people are used to cellphone subscription plans and plugging the phone into the wall at night, Mr. Thesen reasoned, so a switch to electric cars would also be manageable.
And where does Better Place fit in?
“We will own the battery. We will always own the batteries,” said Mr. Thesen. “You guys own the cars.”
He envisioned “hundreds of thousands” of charging spots, as well as a number of stations where drained batteries could be exchanged for fresh ones.
A key thing, he said, will be to recharge the batteries at an acceptable time for the electricity grid — to “make sure people aren’t charging at the very peak, peak time,” like late afternoon when the electricity grid is already weighted down by demands like air conditioning.
Battery recharging would typically take two to four hours, he said.
So far Israel, Denmark, Australia, Hawaii and California’s Bay Area have plans to implement the Better Place model. Mr. Thesen said that a factory in Turkey was being refurbished to be able to produce 100,000 electric vehicles a year.
But a large-scale system of electric cars and smart grids is unlikely to be ready soon.
Asked when there might be one million electric vehicles on the road that could also feed their battery capacity back into the grid in a two-way exchange, the panelists generally said between 2017 and 2020.
Posted by Chad H at 10:54 AM