MeanMesa has watched the numbers flying out of the "gloom and doom" predictions for the future economies of the states.  The new crop of Republican Governors, elected last November, have shown very little restraint when it comes to their attempts to horrify their constituencies.
This is not to say that state budgets are not in terrible shape.
However, the matter has become another example of the media fraud in which the governors may initiate the crime with "numbers from no where," only to be mindlessly followed by clusters of pundits nodding like zombies instead of calling them to the facts.  MeanMesa notes the interesting frequency of voter-numbing scales, too.  The terms "TRILLION" and "BILLION" float through the awkward mess like noodles in chicken soup.
Wisconsin is a fine example.  Unhappily, the list only begins with that unfortunate state.
When the tea bag Governor of Wisconsin took office, the state budget was showing a $140 Mn surplus.  That sounds like a lot of money, but for a state the size of Wisconsin the important message of the figure is not the amount, but that the state budget was in the black.  Wisconsin, until November, had a Democratic Governor and a fairly responsible party mix in its state legislature.
This, again, fairly reasonable, state leadership had cut, trimmed and jimmied the state's budget into a balance with plenty of painful, hard work.  Part of their success derived from some serious "give backs" from Wisconsin state employees, both union and non-union.  Wisconsin state employees have lowered their wages and benefits packages by hundreds of millions of dollars already, and offered to lower them more.
The new Wisconsin Governor, Scott Walker, quickly announced that the state budget was $3.6 Bn in the red, using that terrifying assessment to vindicate his almost psychopathic intention to destroy the collective bargaining agreements  with state employee unions by any means and at any cost.
Of course, there are lots -- did we mention "LOTS?" --  of other moving parts to the scheme.  The stench runs the gamut of a typical tea bag politician's wet dreams.  But here, we want to focus strictly on the money end of the affair.
MeanMesa will, perhaps over generously, actually grant Governor Walker a little credibility, but not nearly $3.6 Bn worth.  The $3.6 Bn number is a political number, not an accounting number.  With the head tea bag in Madison repeating the $3.6 Bn talking point, over and over, to the stunned citizens of the state, Walker's grotesque rampage against the unions seemed to be making sense.
If the Governor's feet were nailed to the floor before the Cosmic Court of Justice, he could probably trot out some flimsy fabrication of justification for his $3.6 Bn nightmare movie.  Even Governor Walker's meat handed political hacks would never have let him out the door without some sort of account reports to cover his lame theater tricks.
So, let's take a look at the $3.6 Bn "gorilla in the living room."  Read the article here.

Wisconsin’s ongoing battle over the future of public sector unions has put the question in stark relief: Is public employee compensation causing the states’ current budget shortfalls and must it play a role in future fiscal decisions?
The answer to the first question is, “no.” The projected budget short-term deficits in Wisconsin and 45 other states is largely a function of tax revenues that remain below their pre-recession peak levels, despite an improving economy. In Wisconsin, Governor Scott Walker’s decision to pass tax cuts that benefit small business and encourage health savings accounts will deepen future revenue shortfalls
However, public employee worker discussions do need to be part of any long-term budget fix.
To start, it will be years before states return to a level of tax revenues they enjoyed in the days of the Internet and housing bubbles. And wage and benefit costs are a large part of state budgets.
In 2007-2008 (the most current year data is available) wages and salaries–excluding pension contributions and other benefits– made up 38 percent of state and local current spending. For local governments, wages and salaries represent 46 percent of current spending. For states, salaries and wages account for 26 percent. What else do states spend money on? Payments for social services/public welfare represent 41 percent of state spending (which does include some salaries and wages) but within this category payments to vendors (largely Medicaid payments to hospitals, nursing homes, and the like) make up 34 percent.

As a result, it is hard to imagine how states can balance their budgets without cuts in public sector total compensation either through wage cuts, benefit concessions, or furloughs and layoffs. That will need to be one piece of the solution, along with finding ways to reduce the growth in health care spending and tax increases. With 2012 deficits for all states projected at $124.7 billion and Wisconsin projecting a two year deficit of $3.6 billion, governors will have to rely on some of each.
Of course, many states are already debating these options. Last year 20 states changed pension rules, and 10 raised employee contribution levels. However, Wisconsin’s Governor Walker would go far beyond labor concessions on benefits (which the Wisconsin public sector workers have already said they would accept). The Battle of Madison is really about his attempt to limit the collective bargaining rights of most public employees. Wisconsin was one of the first states to grant public sector worker rights and has some of the strongest with an implicit duty to bargain.
So, are we about to enter a wave of rolling back union rights? Maybe not.
With 29 Republican governors (17 just elected), many with Republican legislative majorities, it seems like the current budget problems could be used to justify stricter limits on collective bargaining. However, recent polls show barely half of Republicans (54 percent favor: 41 percent oppose) support limiting public sector collective bargaining. It is no surprise that 79 percent of Democrats oppose these restrictions, but most ominously for Walker and other hard-liners, so do 62 percent of Independents. That may be one reason why some GOP governors, such as Mitch Daniels of Indiana and Chris Christie of New Jersey are shying away from open war over bargaining rights.
Of course those surveyed didn’t want to raise taxes or cut spending programs or wages either, although two-thirds did recognize their states were in budget crisis.
Increasing the public’s understanding that tough choices need to be made is a first step. And public sector workers need to be part of these discussions recognizing that they’ll likely have to contribute more for their benefits to reflect new budget realities, a process that seems to be underway in places like New York and California. However, progress is more likely to be made when all parties are willing to negotiate and minority legislators feel they can be heard without crossing state-lines.
At the moment, the only state benefiting from the Wisconsin stand-off may be Illinois, the temporary home to the Badger State’s self-exiled Democratic senators. At least Illinois is picking up a few extra bucks in hotel taxes. And if things get really bad, the Land of Lincoln can always turn in those Wisconsin Dems and collect a bounty.
Interestingly, the State of Wisconsin, just as most other "non-Southern" states, publishes its state budget.  MeanMesa Googled just a bit and arrived at the actual accounting report which tells the actual story of Governor Walker's favorite, the  $3.6 Bn deficit which can be met only by the destruction of his state's labor unions.
MeanMesa visitors can view this accounts report for themselves at this link.
http://www.doa.state.wi.us/CapitalFinance/pdf_files/September_2010_GenFund.pdf
Scroll down through the usual accountant caveats and conditions to the fifth page, titled,
ACTUAL GENERAL FUND CASH FLOW;
JULY 1, 2009 TO JUNE 30, 2010(a)(b)(Cash Basis)"
At the last lines (pages 10 and 11 of the pdf) of this report, we see the "meat" of Wisconsin's budget problem.  Remember that Wisconsin calculates its state budget in a bi-annual base, that is, for two year periods instead of the more common one year period.
We see the Wisconsin version of the same fiscal disaster which plagues most states in the country.   A serious part of the state's cash flow was placed in various, presumably conservative, investments with the return of those investments being entered into the general fund.  When the market was finally looted, that is, when the "bubble burst," these investments ceased producing this cash flow with a predictable collapse of general fund revenue.
Wisconsin is suffering a "state version" of the same thing which happened to millions of 401K's on an individual level.  Also common to most other states, this bad situation shows no particular signs of improving.
However, it is right here that the deception of scale enters the picture.  Governor Walker's $3.6 Bn "boogie man" must be placed into the context of our national budget.  After all, the billionaires' scheme was clearly to "remove" all this cash then pose the remedy of replacing it with more middle class tax money in time for the next "removal."

All kinds of political comments can be added here, but MeanMesa's point emerges from comparing the nation's $969 Bn "war budget" to Wisconsin's  $3.6 Bn state deficit.  With that comparison in hand, we can begin to see the continuing damage of the autocracy's largesse.  In fact, quite aside from the pundits commanding us to "quit blaming Bush," we can begin to see just where the money went -- and how much money went there, too.
Just because Bush is gone, there is no reason to think that the money will return.
Further, we can move these conclusions to the field of our country's annual expenditures for a few, token areas.  From this comparison with Wisconsin's $3.6 Bn, we confront the question of "What, exactly, did we buy with all the borrowed dollars we were spending?" 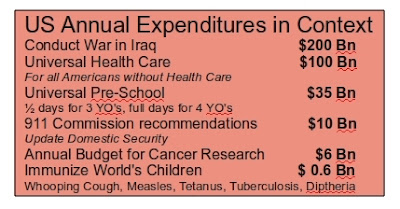 This little chart shows the amount of money we are spending to sustain the military adventure in Iraq and how much we would spend to do a few things which would actually help our economy while making life better for our citizens.
This is precisely what our friendly billionaires don't want us to see.  Ever.  A state version of this is precisely what the Koch brothers don't want the voters of Wisconsin to see, either.  Instead, these billionaires have the idea that a "good time" is watching the "little people" of Wisconsin attack each other while they fight for the scraps of what is left.
To finally end this lumbering post, MeanMesa is presenting the following chart from InformationIsBeautiful.net