The ouster of Mubarak and the most violent part of the Egyptian revolution is complete.  Unfortunately, too many Americans have the misguided perception of these events as being somehow similar to one of our domestic elections.  In the U.S. the transfer of power is, thankfully, accompanied by the institutions  and settled mechanisms which make "having power" equivalent to "being in charge."
The new democratic Egypt, however, found itself lacking those institutional structures -- and not in a subtle way, either.  Consequently, a very dangerous middle ground of interim military rule was accepted as a necessary evil but not as an idealistic choice.
More than a few public incidents of military governance since then have added to the general suspicion about the arrangement.
The priority of a fast, yet fluid, development of Egypt's new social and institutional structure is now clear to all participants -- including those among the military rulers with revolutionary ideals consistent with those in the streets.  The prospect of a constitutional convention any time soon is probably unrealistic, making the power vacuum of this moment even more of a problem.
So, what can be done?  And especially, what can be done right away?
MeanMesa is taking this opportunity to "trot out" a few suggestions.

Interim Referendum Elections for Temporary  Government and Order
It must be emphasized that the earliest elections for the Egyptian citizens will be an interim solution for the period before the new constitution can be ratified.  Questions about the constitution, issues for the constitutional convention and the election of convention representatives may be a process with too many moving parts for the state of affairs currently existing.
However, local issues are too pressing and immediate to wait for the national convention.  Localities have 1.) government bodies filled with Mubarak appointees and 2.) the already pressing need to operate cities and towns under the new system.  The creation of fairly elected local governments which can begin at once to replace more and more elements of military rule may be the most important thing Egyptians can accomplish for the safeguarding of their revolution and their future.
An additional benefit of the "series of referendums" approach will be the development of political structures, candidates and parties with local voting constituencies.  Further, citizens will become accustomed to voting!  It is a new process for many Egyptians, and a little practice while back up security of the military is still available couldn't hurt.
All the rules, public officers and laws will be temporary for the period before the constitution can be ratified and enacted.  All the voters must know that constitutional, national law will prevail over interim local arrangements.

Elections, Ballots and Voting Booths
The military government can immediately begin the construction of all the polling places necessary for popular voting.  An immediate first step will be the selection of polling places and whatever facility improvements are needed to make them suitable.  These polling places must be operational for a series of local referendums which can elect candidates to establish local governments, decide  local intermediate laws and establish local judicial systems -- including the election of local judges.
Even if the polling places, along with significant advertising about what and where they were, preceded the first actual election by a month or two, the effect on the Egyptian population would be a good one.  Such a statement by the interim military government would be reassuring, too.

Electoral Institutions
When MeanMesa looks at "popular voting," the needs quickly transcend physical voting places.  A local voting commission must be one of the first elections held.  Egyptians are, rightly, quite "gun shy" about rigged elections, and the referendums must not fall into this shade if the plan is to work.  With a popularly elected voting commission, the approaching series of referendum elections can start the long journey toward legitimacy.
Although a political "hot potato" in the U.S., voter registration and voter identification cards should be issued and required for getting a ballot.  Legal guidelines for election observers, ballot printing, and ballot protection after voting need to be implemented.  Of course, local laws covering ballot counting and the publication of election results should also be made.

Elections
The election commissions must come first.  Ten or so local residents to sit on the commission will be able to get all the help they need to run an election.  Election commissions can set and publish the rules for elections and monitor the subsequent elections.  The country's population is already "looking ahead" for such news.   A published schedule of the first couple of referendum elections would be a good, first start.  Citizens would need to know what they had to do to qualify as candidates or voters as far ahead of time as possible.

Redistricting by Interim Referendum
A temporary division of areas into precincts will be necessary to create election districts with approximately the same number of voters in each.  Much of Egypt is so remote as to be almost "beyond rural," and Egyptians cities are huge population concentrations.  The interim redistricting plan must assure that all Egyptians are enfranchised at about the same level.  Further down the road, these interim precincts will each select a delegate for the national constitutional convention.
If the precinct definition becomes too contentious, the military can step in to divide the country into temporary equal population areas.  However, all through this process, voting Egyptians must constantly strive to replace military rule with local constituent governance in every possible way.

City and Provincial Councils
Once a few preliminary issues have been worked through the local election process, it will be time to elect an interim mayor and members for an interim city and provincial counsel.  These elections may be the first time many Egyptian citizens have experienced candidates and campaigns.  They may be chaotic, but the results will be temporary.  Everyone elected will serve only until the national constitution can be ratified.
Once elected, these officials will face three primary and immediate challenges.
Police
Justice
Money
Each one of these emerges as a direct result of the corruption of the ousted regime.  Let's look at them. 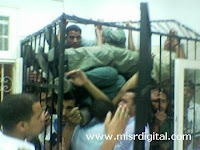 Police
Civil security will be a much larger problem than it was under the Mubarak autocracy.  Although there are already plenty of police around all across the country, the newly empowered citizens want new ones.  The newly elected interim councils will need to quickly and successfully address all three of the issues mentioned above -- and that means, all three at the same time.
The Egyptian citizens hate the entire police and court system as it now exists.  The creation of a replacement system overnight will be "heavy lifting" for local governments not accustomed to being responsible for such things, but it must be done and done well.  The legitimate police presence of the new system will almost certainly be one of the first highly personal experiences average Egyptians have with the "new Egypt."
Justice
Almost as much as they hate the police, of the autocracy Egyptians hate the court system of the autocracy.  The faster all elements -- judges, laws and prisons -- can be replaced with new faces, new rules and new laws the stronger Egypt's chance to reach a representative government.  Both the police and court systems are now provided under military authority, but at a local level, more and more of this responsibility can be taken by citizen voters.
Much of the existing law can continue to serve the general needs of the localities, but there will be important modifications required as soon as possible.  How can this be accomplished?  Once again, by interim referendum.  Egyptian citizens can vote to add or remove laws prevailing in their cities and towns.  A year of experience with this process and its responsibilities will prepare Egyptians for the questions to be resolved when it's time to write their constitution.

Money
During the autocracy, money and resource issues were handled in a manner which made them essentially invisible to common Egyptians.  Currently, the military government controls the nation's revenue and its distribution to both the military itself, and to all the other parts of the existing, post Mubarak government.
Interim governing councils will have to gradually create their own budgets, get military approval and cooperation and start paying their own bills.  This could be a disaster, mitigated only by the limits which will be imposed by the military government, but chaos or not, a learning curve should be undertaken as quickly as possible.  Weakness here could dangerously sabotage the new government.  The U.S. or the IMF could provide expert assistance to interim municipal and provincial governments if it were done discretely.

Of course, there are many other sides to the work ahead for the revolutionary Egyptians, and MeanMesa will take a look at some of those in future posts.  Perhaps the creepy side to such comments about these "Middle East" suggestions is their relevance to political maturity here at home.

All images courtesy of Google images
Posted by Chad H at 12:43 PM