Where We Are Right Now
In 2010, many New Mexicans dabbled with a "Gateway Republican," electing Martinez to replace Richardson -- the political equivalent of a "Gateway Drug" your kids might experiment with at an unsupervised party. Lots of US state elections went that way.  Too many. Already, however, all across the middle of the country we see screaming cases of "buyer's remorse," large protests, state treasuries handed over to cozy, non-tax paying corporations and public commitments being slashed.
In fact, we see recall petitions and large majorities of voters -- some of whom voted these crooks into office in the election a few months ago -- signing them.  Unlike past GOPCons, these new governors went to work immediately -- in broad daylight -- emptying the  already slim state treasuries with tax cuts for their bosses while cutting state services to the unemployed, the children, the elderly and the handicapped to pay for it, conveniently bankrupting a few cities along the way.
It has been a state by state version of a sickening collection of "looting festivals" cast in the grisly memory of what went on during the autocracy.
That travesty was just their "day job."  Their "main marching orders" from the oligarchs who paid for their campaigns was union busting.  Generally speaking, these tea bag candidates were ordered to plunge the US social economy back into the 1950's just as fast as they could sign these stinking bills into law in their respective state houses.
An Email With Some Good News
Martin
Heinrich... for Senate
The email with the good news:
Dear MeanMesa,

Six weeks ago, my friend and mentor Senator Jeff Bingaman announced that he would be ending his distinguished career in public service at the end of his term.  Over those weeks, I have discussed at length with my family how I might best continue to serve New Mexico.  After much serious thought, I am excited to announce today that I will be a candidate for the United States Senate.
I was raised in a working-class family.  My father was an electrician and my mom worked in a factory.  My parents taught me the values that I still hold dear today, and that I believe can help anyone get ahead—hard work, honesty, responsibility, and self-reliance.  My wife Julie and I are raising our two sons in New Mexico with those same values.  Like many families across our state, Julie and I sit at the kitchen table and talk about our children’s future and how tough the path is for too many of our neighbors and friends.  The fact is, a lot of middle class families in New Mexico are struggling to get by as costs continue to rise and the deck seems stacked against them.  It doesn’t take long in Washington to see that things there just aren’t working. Big corporations and special interests seem to get all of the breaks while regular New Mexico families are left holding the bill.  New Mexico families deserve better. When I travel across our great state—from Las Vegas to Las Cruces, from Silver City to Clovis—I see land abundant in resources, and people filled with potential. We have the chance to harness our natural resources—our sun and wind—into a vibrant clean energy economy that can power our country and employ thousands of New Mexicans. We have the ingenuity and innovation that resides not only in our universities, labs, and small businesses but also in the minds of our students, scientists, entrepreneurs, and workers to make this a reality. I would be proud to represent you in the U.S. Senate.  I hope you’ll join me on this journey to provide everyone in this state with a prosperous future worthy of our efforts and our values.
Thank you for all you do,
Martin Heinrich
What to Expect Next
The corporate money bins which installed these loser tea bags  in state governments in the first place are now bulging  with cash to seat some "wholly owned" Republican schill in Bingaman's Senate chair.
Every vote in the US Senate, the way these billionaires see it, is worth a lot to their schemes.  A "lot?"  So much that a cash figure can be placed on winning an election. And, and election in New Mexico, although perhaps not in the coastal "economic treasure states," can go a long ways toward delivering the Senate to control by the "looters."
Worse, with Citizens United conveniently delivered by the national socialist majority of the Supreme Court just in a nick of time, we could easily see a Heinrich opponent so flush with cash to spend that our state economy would feel the jolt.  Also, by "opponent" we might have to include another  alleged Democrat emerge from the money bin crowd, such as the carefully disguised "Joe Romero,"  the "red herring" who delivered a Republican mayor to Albuquerque when a majority of voters cast Democratic ballots.
The point?
Electing Heinrich in this "cash climate" is going to be a tough run.  MeanMesa is in for the fight.
We will have to work, but we can do this -- even without bundles of corporate cash.
For MeanMesa's international visitors: 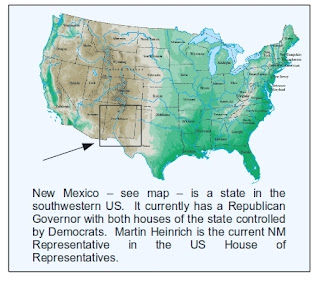