MeanMesa seldom carries the Short Current Essays blog to the home base, but recent events have made strange bedfellows, indeed.  Just when all efforts should be directed at initiating the card campaign for the 2012 election cycle, the local management has finally "crossed the line" in the plunging disaster of the maintenance for our apartment complex.
A Very Brief History of Galactic Headquarters
This apartment complex of 80 two story two bedroom apartments is owned by some furtive property investment group.  The "faces" of this bunch are two people.  One, the "owner's agent" for the complex, is a predictable sort, that is,  a dignified middle aged, grey haired businessman who is probably interested chiefly in monthly rent revenues and big ticket expense items.
The second "face" is the apartment manager.  It is her job to show and rent apartments, deliver late payment warnings and eviction notices.  She, of course, is the person to whom complaints from residents must be directed.  She works for the "owner's agent," probably at close to the minimum wage.
Dutifully following the "chain of communication" for resident complaints, MeanMesa advised the manager three weeks ago that the  common areas of the apartment complex, courtyards and the like, were desperately in need of maintenance.  This complaint was lodged before the really bad behavior began.
The Really "Bad Behavior"
Well, although no action was taken to mow the grass, the manager, last week, launched out on a complex-wide campaign to force all residents with  automobiles without current registration (MeanMesa's van was legal...) to move their cars to the street or be towed.  Naturally, in a low income housing such as this one, the number of cars targeted was substantial.  MeanMesa's next door neighbor's car was "on the list."
The manager was revelling in this latest "control issue" as she made her way through the various parking lots in the complex.  She was very contentedly explaining to all who complained that she -- as the complex manager -- had the right to "ticket" all these cars, that this authority was hers based on the lease agreements in place and the fact that the parking lots were private property.
MeanMesa joined the fray as the emotional neighbor questioned these actions of hers.
"Was there a shortage of parking places?"
"No."
"Were there junk cars sitting in the lots?"
"No."
"Why are you doing this?"
"It's in the lease agreements, it's private property and I can do it if I want to."
Well, the conversation degraded from there.  Perhaps all the details can be summed up in one of the last comments from MeanMesa.
"It's the thought that counts."
Happily, it turns out that the particular parking area where the neighbor's car was "ticketed" was actually not private property but the extension of a street right of way.  Further, it turns out that the neighbor's lease agreement didn't have this clause anywhere in it.
Having been "dismissed" by this eager little manager, MeanMesa watched as she stomped away.  The apologies to the neighbor came later after property ownership and lease agreements had been reviewed.

Amid a flurry of internal grumbling, MeanMesa characterized the incident as a codependent "control issue" episode, and returned to a more or less normal schedule. However, there remained a gnawing resentment at the idea of the ridiculous "meanness" of the move.

The Second "Issue"
Returning to the common areas in the complex, what has been traditionally a very dependable management habit for maintaining the grass, has, this year, fallen to an all time low.  The grass hasn't been cut in over a month, and the watering schedule has been cut back to save money.  Dandelions and weeds now constitute what had always previously been the wonderful green grass all through the complex.
Finding that "old spark" of the community organizer deep within the "wires and gears" of MeanMesa, the decision was taken to "fight back."
Because the front door of  the Galactic Headquarters apartment faces the walkway to the complex offices, it was decided that a large sign should be placed on the front door.  The first line of countering these outrages will be the sign, there for all potential renters to see as they approach the office -- and the manager.
If this doesn't have the desired effect, a concentrated effort to organize the renters into a Resident Association will follow.
The Sign
Now, unlike political signs MeanMesa has authored in the past, this particular sign needed that "angry agrarian reformer" flavor.  Stepping over the idea of a few misspellings, but still focused on a treatment of the the issue which might encourage MeanMesa's fellow residents to "join up" if the Resident Association becomes necessary, out came the magic markers.
The pictures below tell a "story of a thousand words." 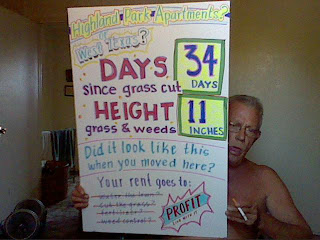 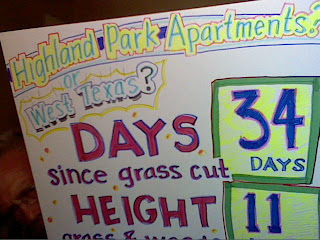 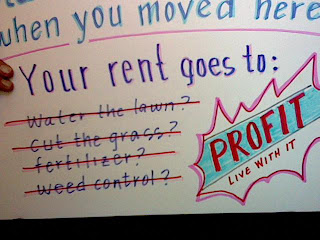