Keeping the Interest at Home - Introducing the US "Debt Bond"

Waiting for the Milk Train
MeanMesa watches in awe as House GOPCons quietly maneuver their way through the wreckage of the economy as they set the stage for their big "looting come back" scheme, now perched, ready to launch, at the fist sign of the national numbers indicating an imminent recovery.
GOPCons win elections talking about jobs.  But then GOPCons prepare for the next election by focusing solely on spending cuts, the task assigned to them by their oligarch masters.  In the meantime, GOPCon days are filled with less important tasks such as protecting the subsidies for oil companies, chasing birth certificates and practising a subtle racism just sophisticated enough to provide "plausible deniability."
As soon as there is so much as a single, unspent dollar in the Treasury, their perpetual "tax cuts for the rich" schemes will resume with a fervor.
Note to the Middle Class:
"Put Your Tax Payments in the Leaky Bucket"
Most tax paying Americans, that is, Americans who have absolutely anything else to do besides pulling the Congressional "puppet strings" from their atmospheric mansions, are quite comfortable with the idea of paying taxes for roads and schools and the like.  The problem is that the taxes go on while the roads and schools go down.
Money which is theoretically targeted at such "commons" is routinely diverted to, you guessed it, more tax cuts for their cronies.  In fact, the very common sense approach to handling the deficit, increasing revenues by raising taxes, is essentially no more than a "straw man attempting to swallow a live red herring."
If tax revenues were to increase -- tax revenues from increasing the taxes rationally -- the money would simply be immediately transferred to the oligarchs in the form of more tax cuts (tax cuts, tax expenditures and subsidies).  The national debt would never decrease, the economy would get even worse and the GOPCon wet dream of unseating Obama would move even closer to fruition.
It's a very clever set up, indeed.  The GOPCon plan is now revealed in all of its splendor.  Rack the deficits up sky high under cover of the autocracy, absolutely prohibit any talk whatsoever of increasing revenues and then, while the "masters of the world" are lounging around counting their take, endlessly repeat the chorus of GOPCon "mouth junk" about "job creators" and "small business."

The only real cost to the GOPCons is for the purchase of more day old horse adrenalin with which to saturate the "mouth junk."
Granted, a chorus of amateurs such as Boehner, Cantor and Ryan, all tapping the now dilapedated tune of party leadership like McConnell and Gingrich, is hardly a persuasive  masterpiece, but, repeated often enough, it still might work.  The GOPCons only need 50% of the votes less what they can steal with phony machines and crooked Secretaries of State.
The problem is that tax paying Americans, although they have no particular problem with paying what's needed to keep the country going, cannot get so much as a single nickle of their tax money directed to the things which are important to them.
The GOPCons have no difficulty playing the "school bully" who steals the lunch money so efficiently that the entire third grade is losing weight.
Absolutely Nothing Can Be Done
Oh, maybe there is one thing which could be done.  Here comes MeanMesa's proposal to straighten the whole thing out in a few months.
The national US Citizen Debt Bond. 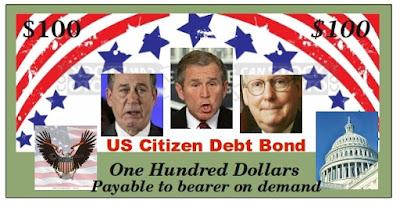 The plan is simple enough.  Get a bill authorizing the sale of massive numbers of US Citizen Debt Bonds through the Congress and onto the President's desk.  Once the thing becomes law, a major part of the $250 Billion annual interest payments we are now making to all of our creditors would be "re-directed" back into the domestic economy.
Of course, at the first mention of such a plan, GOPCons such as Boehner and McConnell would instantly be on the phone to their billionaire bosses on Wall Street and in the super secret hedge fund bunkers.
"WOOO-HOOO!  Thar's money flowin' inta the Treasury agin!  Git out yer deposit slips 'n call yer off shore bankers! All yew billionaires kin 'xpect more tax cuts commin' at ya' in a week or two!"
Wait a minute.

For this plan to actually work, there are going to have to be some rules.  You know, rules about spending all the money that will be raised.
The Debt Bond revenue will have to be directed to infrastructure rehabilitation.  That means both good jobs -- local jobs -- and better infrastructure down here on the ground where we live.  No tax incentives or subsidies will be required.  Just pay to fix the country's current train wreck of 1950's projects.
"1950's projects?"
That was about the time that most of the US national infrastructure was built.
The Debt Bond revenue won't be used to pay for more tax cuts, spending cuts or "deficit reduction" (GOPCon translation: "tax cuts").  Let the main economy sort all that stuff out, which it will, given time.  Let the Debt Bond "economy" supply what's necessary to keep the country running in the meantime.
Debt Bonds couldn't be traded a "commodities futures," investment derivatives, bank bail outs or siphoned into the ridiculous morass of Medicare shortfalls.
Finally, about the "faces" appearing on MeanMesa's suggested graphics for the physical bonds.
These are the faces of the debt mongers.  Regardless of the latest GOPCon media flatulence about emergency spending cuts and national debt, these are the faces of the men who managed the extraction of $7 Trillion dollars worth of cold cash from the public wealth of the country.
Of course their faces need to be on the Bond issue.
Posted by Chad H at 11:43 AM