Oh Darn. No Huckabee. No Trump. Has the Fun Slipped Away?

With a predictable reluctance to join up with the freak show, we see some of the "low hanging fruit" of the GOPCon/FOX Presidential candidates slithering back under their rocks to wait for a better chance later.  This leaves the FOX GOPCons with a rather embarrassing "talent shortage" as the front lines of the 2012  election contest begin to unfold.
So, the call has gone out to every trailer park and American Legion Bar South of the Mason Dixon Line for additional "cannon fodder."  Naturally, many of the potential candidates, "diamonds in the rough," are a little confused about exactly how to jump into the race.  They've seen the ad, and they'd like to live in a big White House, but they're just not completely clear on where to begin. 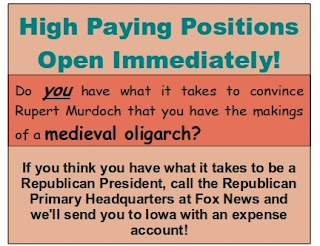 For those folks who have been suffering without jobs in the long, dreary Republican Great Recession of 2008, the prospect of getting new clothes and a helicopter looks simply "too good to be true!"  Plus, rumor has it that you have your own cook!  All at tax payer expense!
Well, rising to the occasion, MeanMesa has prepared an abbreviated chart which shows the important steps to getting that new job.  Just try to follow the boxes, and you'll be in the Oval Office in no time. 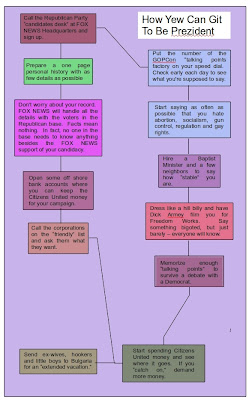 Try to remember this important date.  The election will happen in November of 2012 -- next year.  We'll see you there!
Posted by Chad H at 8:10 PM