Obama - Just This Once, Listen To Polls

When Not Even GOPCons Can Refute Public Opinion

No, the voice of the American people, including Republicans, is not confusing.

MeanMesa visitors know that when one "shops around" public opinion polls via the Google, just about any results desired can not be found, but also presented in a manner which implies perhaps too much credibility.  In hopes of avoiding just this dilemma, the polls selected for presentation in this post have been purposefully limited to sources one might, generally, assume to hold converse results to the ones a blog such as MeanMesa might otherwise choose.

Further, for anyone with even a passing interest in the media "news," none of these poll results will appear to be either "shocking" or even suspicious.  All these "not particularly surprising" tid bits are posted here to establish a  comfortably firm foundation for a question we will submit later.

The most exploited "news" issue of the moment is one which implies that Barack Obama has "placed 'entitlements' on the table" for conversion to tax cuts for the oligarchs in charge of the Republican Party.  Although a direct contradiction to the President's campaign declarations, this "news" story has been played dozens of times on the media in the last week or two.

MeanMesa, looking at this, has reached a couple of possible conclusions about what is actually happening in Washington.

1.) Obama's formidable political savvy has offered this provocative and unpopular stance as a "bait and switch" gambit to draw the already over reached GOPCons into a political abyss with no bottom.


2.) The quivering, gutless Democrats in the Congress have finally freaked out to the point that they think that, somehow, they must join their GOPCon colleagues on the dining car of the train wreck if they are to win re-election in 2012.

So, let's look at a few of the public opinion polls.  MeanMesa believes strongly that the content of these polls will directly correlate to the outcome of the 2012.  This has not always been the case with public opinion, but the deflection this year seems to be simply momentous.

It's as if every member of Congress, staggering under the thrall of the wing nut propaganda, has simply disconnected the phone and turned off the television.  We'll throw in the old Ayn Rand quote for grins.

“We can evade reality, but we cannot evade the consequences of evading reality”  Ayn Rand

Even Australian fascist Murdoch's  favorite "toy newspaper," the WSJ, joins in with it's own content.

WASHINGTON— Less than a quarter of Americans support making significant cuts to Social Security or Medicare to tackle the country's mounting deficit, according to a new Wall Street Journal/NBC News poll, illustrating the challenge facing lawmakers who want voter buy-in to alter entitlement programs.
In the poll, Americans across all age groups and ideologies said by large margins that it was "unacceptable'' to make significant cuts in entitlement programs in order to reduce the federal deficit. Even tea party supporters, by a nearly 2-to-1 margin, declared significant cuts to Social Security "unacceptable."
At the same time, a majority supported two specific measures that lawmakers might employ to shore up the shaky finances of the main entitlement programs.
More than 60% of poll respondents supported reducing Social Security and Medicare payments to wealthier Americans. And more than half favored bumping the retirement age to 69 by 2075. The age to receive full benefits is 66 now and is scheduled to rise to 67 in 2027.

And an except from a New York Times article about public opinion regarding cutting the budget.  (Apologies for the botched up content graphics...)

Poll Responses on How to Cut the Deficit
Advertise on NYTimes.com
Results of a New York Times/CBS News poll about the federal budget deficit.

In order to reduce the federal budget deficit, do you think it will be necessary or not necessary to increase taxes on people like you?

Do you think it will be necessary or not necessary to cut back on government programs that benefit people like you?

If you had to choose one, which would you prefer — raising taxes on people like you or reducing spending on government programs that benefit people like you?

If you had to choose one, which would you be willing to change in order to cut government spending?

If you had to choose one, which of the following domestic programs would you be willing to reduce in order to cut government spending?

If you had to choose one, which of the following changes to Medicare benefits would you prefer in order to reduce the federal budget deficit?*

If you had to choose one, which of the following changes to Social Security benefits would you prefer in order to keep the program financially sound?

*Asked of half of respondents.
By THE NEW YORK TIMES |
Based on a New York Times/CBS News poll of 1,036 people nationwide conducted Jan. 15-19. The poll has a margin of sampling error of plus or minus 3 percentage points.
And, the Gallup Poll:
JULY 10, 2011

And, from Reuters:
Read article here. 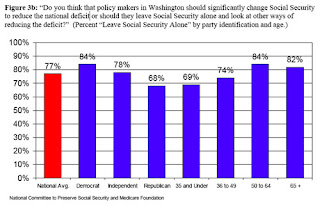 
Public Opinion Snapshot: Not All Tax Cuts Are Created Equal in the Tax Cut Deal 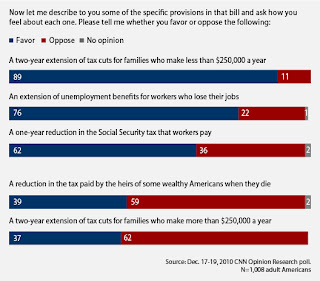 Finally, the question which was mentioned before:

Is the President trying to get me -- and the rest of American Democrats -- involved in a Democratic Primary before 2012?