A Brief History of ComCast and MeanMesa
Years ago, ComCast was "invited" into MeanMesa Galactic Headquarters bundled as an internet provider and a Spartan, 30 channel cable television service.  The monthly bill was around $40 for the internet and another $11 for the basic cable hook up.  Because of the "geriatric situation" which dictated MeanMesa's personal tastes, this television arrangement was fine.

The "geriatric situation" amounted to an appetite to watch television instead of running around town in the dark of night which, predictably, increased with age.
The old tele could provide FOX, an on-line shopping extravaganza, all the alphabet networks (except MSNBC, of course) six channels of Spanish language melodramas and another half a dozen dirty shirt preachers from Kentucky asking daily for mail-in "faith blessings."
Those were the good old days.

Looking back through the 2010 ComCast billing history, we see a routine monthly billing reflecting this arrangement.

However, in the cold, dark days of December, 2010, a nice ComCast man knocked on my door. offering a "ComCast special" which, for an additional $29.95 per month would increase my cable service from the "basic" level of 30 channels to an "advanced package" of around 150.  After immediately agreeing to this sudden and robust opportunity and "good fortune," the man installed a new box or two, and the old tele "blossumed" into a new state of service and access, one previously almost unimaginable.

Calculating the new monthly bill was simple enough.  Starting with the $55 or so of the old bill and adding the cost of the new "advanced package" -- including New Mexico's 7% sales tax -- the new bill would be around $90 per month.

Importantly for this posting, the nice ComCast man explained which new channels would be included in the "advanced package," and, in fact, after installing the new boxes, carefully checked to make sure that these new offerings were, indeed, now on the tele.  There were plenty of "ComCast advanced package dentritus," but there were also a nice collection of science, history, military and science fiction offerings.


The Letter
However, by June, 2011, ComCast was no longer interested in continuing our business relationship.  Bluntly, the Texans in charge of sustaining ComCast profits took a decision to raise rates, more or less, on the "spur of the moment."

The particular mechanism of this "raising rates" process of theirs would begin with a letter to all ComCast subscribers.  The content of this letter follows: 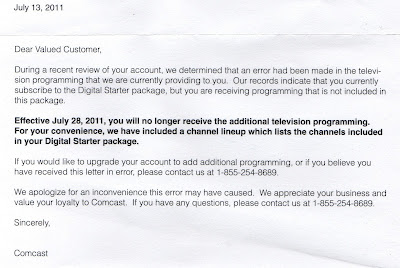 Naturally, MeanMesa called the number in the letter and asked about just what would be required to "keep" all the channels which had been "mistakenly" included in the "advanced package" installed by the nice ComCast man a few months earlier.  Of course, the precise channels which had been "mistakenly" included all this time were exactly the ones which made the "advanced package" desirable in the first place.

The 24/7 colon cleansing channel, along with the endless infomercials for the soap scum removing bath brush, Pastor McGillicutty's Sin Fighting Pentecostals  a relentless offering of cut "gem stones," senior golf and Amish wood stoves would emerge from ComCast's correction of the "mistake" uninjured.

Well, ComCast's remedy to this "mistake" turned out to be quite simple.  For an additional $10 per month or so, everything would be returned to its previously satisfying state with no hurt feelings whatsoever.  Still, spurred by a lingering suspicion that the whole affair amounted to little more than a cheaply disguised "bait and switch" scheme to raise prices just as ComCast was adopting yet another profit enhancing lunge before changing its name, MeanMesa called them back, telling them to just "shut it down."

There would be no blood money extracted by such a sleezy gambit.


From this point forward, the favorite channels began to slowly disappear.


The Handsome Young Strangers
Although MeanMesa was succumbing to a growing grumpiness from having all these channels deleted, the old stubborn consumer was bearing the travails of the deprivation fairly well.  After all, reception still included the local PBS channel along with Rachel Maddow each evening.

Then, one afternoon while returning from the nearby whole foods grocery with a few veggies for dinner, MeanMesa encountered two nicely dressed young men, resting by the postal boxes.

"What's brought you two to the apartment complex?"

Of course, in practically no time at all, MeanMesa had transferred the television cable to DISH, receiving in the bargain, lots of channels and a good reduction from the old ComCast price.  The two salesmen said they would cancel the ComCast cable service and get a refund on the unused time.  MeanMesa suspected at once that ComCast would be acting very much "out of character" to actually do something this ethical and reasonable.

That turned out to be the case -- no refund.  Still, the change was well worth it.  The sensation of leaving ComCast was similar to escaping from East Berlin.

The young DISH salesmen also said that they would replace the old ComCast internest service with Verizon, further reducing the price of the television computer bundle.  This part of the offer has not yet materialized, but, with the prospect of dumping ComCast completely now on the table, it turns out that there are plenty of alternative computer servers.


The Last Roar of the Wounded Boar
The computer problem hasn't been resolved yet, but it will be.  In the meantime, ComCast has sent their latest bill, no doubt still smarting from the loss of a customer.  It is included here for an example reference.  The monthly bill under the new ComCast brand image, Xfinity, has increased from $96 to $142.  The new monthly cost of replacement services will be around $70.