A Memo to the "Occupation"

A Few Ideas to "Chew" On
First, know that MeanMesa loves you.  Every single one of you.  The UFO folks, the pure food folks, the clean water folks, the anarchists and the politicians. The hulu hoopers, the drummers, the stoned and the determined.  Every single one of you.
The commercial "mouth junk" is having gastric problems trying to decide just how to handle you all.  It should be clear by this time that most of these talking heads are already planning for your demise.  They want, very, very much, to turn out to be the ones who were able to "see through" what you're all doing.
Of course, these "heads" are consumed with the prospect of having "been right all along" and the corresponding ratings jumps they dream of getting for being the most historically perceptive, politically savvy, but ultimately, the most "accurately cynical."
Some of you may have held momentary fantasies about the commercial media dedicating a lot of attention to what you're doing, but you will be well served to remember that the prize they seek rests among their viewers and has absolutely nothing to do with your wonderfully dynamic dreams.  For further clarity, we can divide them into two groups.
The first bunch will be the "comfortably numb," fireside sweater and even speech contingent who have been dutifully spewing out "grandfatherly analysis" which usually begins with a comparison between you and some other movement in the past.  They will scoff and chuckle with a few well seasoned reflections on other things before they begin their relentless efforts to validate their false dichotomies as a prelude to the predictably artificial hypocrisy hunting.
First Bunch:  PBS NewsHour, NBC, ABC etc.
The second bunch will careen immediately into name calling, skipping the tedium of making such comparisons at all.  Their "mouth junk" will have you unwashed, sexual profligate, ne'er do well, drug criminals with ties to both the Soviet Union and al Qeada.  The irony is that their listeners had already completely arrived at such conclusions before they received the first words of the broadcast.
Second Bunch: Limbaugh, Hannity, O'Riley, Levin and the other FOX denizens.
Both "bunches" are presently infatuated with repeating over and over that "no one can be sure" what you want to accomplish, but that you are, most likely, something to be feared.  This post will deal with this side of things next. 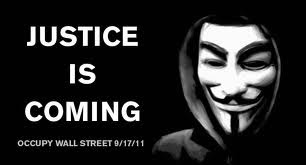 The Ghost of the Occupation's Past
Some of you may think that the zany, out of control diversity you are presently manifesting will turn out to be a weakness, a vulnerability.  You may consider this aspect of where you are now to represent a significant weakness on your journey to becoming a well understood, media enhanced popular movement.
You know, like the tea bags.
Well, you are 180 degrees off target.  The tea bags have been exposed along with the gears and levers of the "grassroots" movement which created them.  Their world got viciously "warmed up" with literally hours of incendiary FOX broadcast time not because it was interesting, but because Rupert Murdoch decided that it would.
Whatever inertia this created was immediately "monetized" by Dick Armey's public relations arm, causing the dismembered juggernaut to lurch forward for a while.  The disgruntled FOX fans misspelled their signs and rode to over reported appearances in hired busses where they burped and farted on queue for the cameras.
The tea bags are now a violent, embarrassing piece of history.  The 2010 election products are horrifying the country as their disembodied past favorites lodged in the House of Representatives continue to rampage destruction.
Some of the "occupation folks," following along with those attempting to describe them for cash and profit, may have this same concern.  Forget it.  So long as your uncontrollable, energy rich chaos continues, you will never face the fate of the mystically feral tea bag "innocents" if there ever were any.
No one in the moneyed class wants to help you, and yet none of them can formulate a scheme to exploit you.  All they want is to silence you, to ridicule you, to outlast you.  Your formidable defense against all these insults resides in your wonderful confusion.
At this moment the "suits" are waiting for a safer opportunity to orthagonalize you.  If they can reduce all this uncontrollable diversity to talking points, ostensibly revealing your every quirk, sponsor, inspiration and claim, they will have assuaged the fear and excitement by creating a way to remove your teeth.
Those who oppose you eat a diet of cynicism.  If you "take the bait" by normalizing and enforcing all your varied positions into something specific, the world will enjoy a comfortable revelation that, in the end, nothing is real, everything is just more of the same and that the "occupation," like everything else in their dismal world, has feet of clay.
It doesn't.
So, remain individuals.  Those who watch may come to understand slowly, but they will come to understand.  It may take some time for them to realize that they actually do have an appetite for ideas beyond the media's pablum of conceptual efficiency.
The Ghost of the Occupation's Future
MeanMesa predicts that you will meet this flimsy waif sooner than you think.  A robust, literary plot might be attractive, but both you and the ghosts are operating on a calendar which ends this phase in November of 2012.
And, we're not talking Aztecs here.
You are going to become political.  Further, it simply won't do to have this metamorphosis as a result of being dragged into it, kicking and screaming.  Regardless of what the breathless terror mongers on FOX may say, you cannot overthrow the government.  All the things you want the most will arise from the Congress.
But they can only arise from a very different, new Congress.  That rancid place is precisely where the old things that you hate the most came from, too.
At this moment, there are Democrats who, viewing the mass of people in your occupation, see only campaign workers who can be coerced into another round of backing the lessor of two evils.  There will be no shortage of Max Baucus's and Mary Landrieu's licking their chops at the prospect of a cut rate campaign carried on the backs of you and your friends.
The Republicans are simply reaching for their sleeping pills in hopes of avoiding the nightmare.
Facing facts, your occupation will have to conclude that there are probably not candidates who can be trusted to live up to the pledges of allegiance to your ideas that they will be anxious and eager to murmur.  You will need new candidates, and those people are standing among you right now.
Expect a litany of impossibilities. Insurmountable political machines.  Immense Citizen United money. But through all of this, anticipate and recruit a collection of new politicians who cannot be "orthagonalized" any more successfully than you can be at this present moment.  Some of those you pick will turn out to be "purchasable;" others will turn out to be simply crazy.  However, among them will be the new versions of Bernie Sanders and Elizabeth Warren with fresh faces.
Jim Morrison's old rock and roll admonition means everything:  "They've got the guns, but we've got the numbers."
You've got the numbers, and MeanMesa predicts that you will have even more -- many, many more -- in the days and weeks ahead.  Stay free and open, and most important of all, stay wonderfully energetic and chaotic.  Don't worry about message.  You're doing fine!
Hold your sabre loosely.
Posted by Chad H at 9:11 PM