When a Republican "Debate"
Becomes a Snake "Kissy"
Okay, which one's the dummy and which one's the snake?
Don't try this at home or in a voting booth.
After watching the December 10th [You know, the  day which was notable for the lunar eclipse, right?] 417th ABC Republican Debate [yawn...] for around 6 minutes, MeanMesa is completely prepared to offer a few conclusions about the grotesquely unusual goings on.
The corporate "news" pundits had been absolutely breathless for the days approaching the "debate."  The American penchant for reducing all political discourse to foot ball analogies was at full steam, and the GOPCons rose to the challenge.
"The Newtster gonna' clean thet Morman clock!  Jest yew watch!  Chraust 's gonna take 'er bah 6 'r 7 points!"
"We'll be seeing a little of the blood once Mr. Nice Guy Mitt takes off the, uh, mittens, uh, the gloves!"
Instead of all this, what we watched with our jaws dropping was everyone being nice to each other!  Of course, the "reputation" of the hard hitting debates didn't suffer much, it simply switched from rabid FOXite talking points to a snake kissing festival.
How could this have happened?  What could it mean?
This is where MeanMesa's internationally renown credentials for careful, thoughtful reporting swings into action.


"Roughing Up" Romney
The billionaires who own the Republican Party have already decided that Mitt will be the nominee.  The problems these long suffering corporatists "saw on the horizon" derive from the man's, yawn, utterly two dimensional image.  The candidate needed a bit of street scrapping to toughen him up enough that he could, well, fit into the base's football analogies.

The GOPCon version of the "intellectual challenge" approach wasn't working.  No matter how persuasive the "debates" became, the meat eating base in the audience kept cheering for all the wrong things.  Mittens had neither executed enough people, threatened enough foreign countries nor allowed an adequate number of 30 year olds to die from lack of health insurance.

Clearly, what was needed was a toothless opponent with a populist waistline and equipped with plenty of feathers, fury and fangs.  The problem grew worse, however, when the GOPCon base fell in love with the gaseous platform and policies of Gingrich while injudiciously overlooking his genetic, general election, sex flaws.


Now, their favorite boy, Mittens, is covered with bruises, and the evangelicals in the unruly audience base are cheering for Newt's Biblical infidelity.


St. Reagan's "11th Commandment"
It turns out that the "11th Commandment" had significantly more "staying power" than the first ten.  For years we have watched the Congressional GOPCons fall in line lockstep with their leadership as if they collectively suffered from having the same brain.

Of course, we know that they haven't really had the same brain so much as they have all received phone calls from the same bosses.  Ronnie Raygun's "11th Commandment" held sway right up until the day the tea bags arrived in the House after the 2010 election. 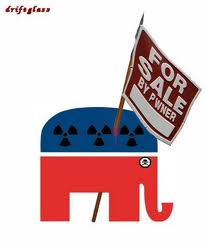 The 11th Commandment
"Thou shalt not criticize other Republicans."
Given the "snake kissing" interlude before the punches started flying at the last debate, we have to conclude two things.  First, the bosses didn't like the unorganized "fly bys" which had characterized the previous debates and the collapsing public imaging of the party's candidates and brand.  Second, the whole lot of these "debaters" had been called to a "meet Jesus" moment by those in charge, a "meet Jesus" moment where the "11th Commandment" was read like a riot act.

Naturally, the "riot act" had everything to do with the check books in the back pockets of these very same billionaires.

The mandate was straightforward.  Somewhere in the early minutes of the "debate," each of the flagging candidates would heap praises on another, citing specific examples of how the praised candidate had beneficially influenced the political savvy of the praiser in the past.

The result was a sickening, televised mix of the hysterical and the horrendous.

No problem.  Within nanoseconds after the "snake kissing" had been completed, the whole thing had lurched back into its normal Bronze Age mode with the "frenzied fists of favoritism flavored fascism" [i.e. "F5"] flying right and left just like a brawl over whores in a lumber camp.


The Oligarchs' "Next Dilemma"
The very best, most heart warming examples of "unanticipated consequences" come from the cases where the effort and engineering of the bad decisions reaching fruition in the process were lengthy, painful and expensive.

Now, however, the parallel process will occur on the Republican side.  In this case, everyone will get to see Gringrich and Romney go through the same blood soaked,  "winner take all" process.  The horribly unfortunate prospect facing the oligarch's in charge of herding the Republican base to the "right" decision rests squarely upon the terrible image problem which will inevitably accompany the comparison of the two processes.

A comparison which may very well become a comparison of the two parties.

Even to the heavily challenged, burping and scratching, "late night at the American Legion beer bar crowd," these GOPCon candidates will, correctly, look unavoidably "little."
Posted by Chad H at 12:28 PM