Some Interesting Questions
MeanMesa's faceBook page is filled daily with comments and revelations about the now grotesque wealth concentration in our Republic.  Although MeanMesa sympathizes with such ideas, empathizes with the intention of these modern "muck rakers" and, generally, is in agreement with the often narrowly disguised outrage which motivates such discourse, there seems to be something missing.
"Something missing?"
Yes.  That "something" can, perhaps, be expressed clearly in a few simple questions.
1.  Where do we go from here?
Beyond simply "not liking it," the horizon is disturbingly free of counter proposals.  What would the US economy look like if this wealth inequality issue were to be resolved?  Restoring the cultural aspects of American capitalism seems to be a well targeted proposition when considered only in the scope of isolated examples, but why stop with simply rectifying the most egregious and identifiable parts of the problem?
A comprehensive and fundamental solution seems to be the only way we can re-create our economy, but what is it?
2.  How far do we go?
Somewhere along the line, the vast wealth being horded by the richest among us will, presumably, need to have new owners.  Also, presumably, the old owners will not be rushing forward to simply cooperate with such a plan.  Will new tax policy -- perhaps including retroactive wealth taxes -- do the trick?  Further, what kind of representative government would ever be able to muster such an effort?  What alternatives are there?  Who or what will receive the "liberated dollars?"  What will be done with them?
3.  How fast do we go?
There are widely varied opinions about the immediacy of the necessary time line.  MeanMesa proposes that time may be of the essence.  Yet, the faster the corrections take place, the more likely they are to be truly destructive and, possibly, violent. If a slow and steady approach is adopted, we could easily find ourselves facing the same problem even before we have solved the current one -- only the same problem with substantially improved defensive fortifications.
Was There Ever Really Any Idea About
How To Do It? 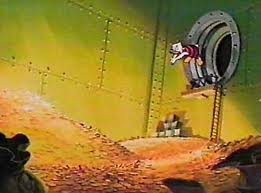 Even before the Revolution from England, wealth distribution was already a well established social reality.  Aside from the high flung idealism found in our modern history texts, we were a country obsessed if not by the distribution of wealth directly, at least by the ideas about the distribution of opportunity.  Further, this same question was already, front and center, on the minds of pre-Revolutionary Americans at all levels of the economic ladder.
The connected elite among the mercantile dreamers watching their ships arrive from Europe had their own idea.  The struggling farmer with just enough land to have his own dreams had his own idea, too.  Slaves weren't allowed to have such dreams or ideas, but their owners certainly were.
As all versions of these concepts jumbled along through good times and bad for the next two centuries, political morality always rose to the occasion to justify whatever momentary model was embraced.  Virtual libraries of past ideas -- including, very often, the Holy Christian Bible -- lent themselves to the effort to determine what style of wealth distribution was right, inevitable, moral, effective or ideologically pure, to inject legitimacy into both rapacious luxury and the misery of poverty, to delineate the respective causes and responsibilities of each and to narcotize the unfulfilled with every possible kind of conceptual economic analgesic.
This frustrating chaos of continually flirting with various economic principles is not at all unique in history.  Humans have long held the habit of proceeding forward in all sorts of things without a thoughtful "big picture" to guide their efforts.  Each time the prevailing concept of wealth distribution modernized itself, economic historians provided new labels, naming the old and the new and characterizing each modernization as revolutionary, transformative, corrective or evolutionary.
2012 has, once again, seemed to lift the curtain for the next scene in the old play.  This latest episode of "seeking the right path" may be notable for how quickly traditional defaults are being discarded.  There's no shortage of old stuff -- Biblical, Roman, Keynesian and Marxist.  There's no shortage of new stuff -- internationalist, class based, corporatist and oligarchic.
Oooops.  The list of new stuff seems to be the same as the list of old stuff.
The point here is that none of these convenient choices seems to gain much traction as a candidate for today's path ahead.  Still, we may actually be watching the sausage making process of birthing the next economic model -- and, especially, the next wealth distribution model -- as we speak.
The starkest similarity to what has happened in the past?  The designers of the new have neither any particular knowledge of nor any particular interest in what has been tried before.  This has always been the case.  Yes, the high borne treatises on economies were being written during the French Revolution, but the folks dropping the guillotine blades never read them.
Not then, and not now.  Opportunity, defined as money, has always had much more weight than theory.
How Will We Change Wealth Distribution? 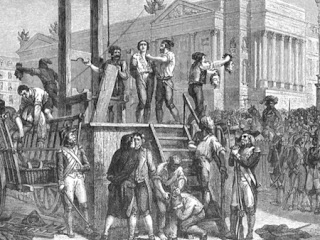 First, we must probably dispatch a few old ideas.  Especially old ideas about the "legitimate ownership" of wealth.  That "ownership" will now be called to test.  If the "ownership" is to be legitimate (accepted by the social culture as a whole), then the sources of such wealth must be deemed equally legitimate.  The new "judges of legitimacy" will be the folks dropping the guillotine blades, not the theorists perched over their word processors in campus offices.
The "No, not this." vote is one of the simplest to make.  The current state of opinion about the legitimacy of existing wealth distribution wins this vote easily.
But, using that base line as a starting point, the next questions appear immediately.
1. How much must wealth distribution be changed before it becomes acceptable?
Is a little movement going to be enough?  How "equal" must "wealth equality" become before the participants -- including the theory authors, the guillotine blade droppers, the lavishly wealthy and those in poverty -- can agree that a suitable amount of progress and change has solved the problem?

If "wealth inequality" is the problem, what does the solution look like?
2. What are acceptable limits to such a corrective action given the grave severity of the existing structure?
While the French Revolution was roaring at full, violent force, the mansions of the noble families were looted by the first folks who got through the doors, but the intangibles of royal wealth -- the shipping companies, warehouses, farms and so on -- became the property of the Revolutionary government.  In 18th Century France, noblemen had lots of direct valuables, gold, jewels, silver and other trappings of wealth in their homes, but, like today, the foundation of their wealth was in commercial holdings.
After Octavian had struggled through the Roman civil war and survived the Triumvirate, he simply assassinated the wealthy Romans who had opposed him, transferring their fortunes to the Imperial coffers.  Of course, Octavian had the key to the Imperial coffers.
Those with an ambition of correcting the "wealth inequality" we see around us now would prefer to avoid both Octavian's assassinations and the French looting.  However, similar to both examples, the real wealth which is the foundation of modern wealth inequality is not found in liberated mansions, no matter how lavish they might be.
3. If illegitimate wealth is to be redeemed from its current owners, where will it be put?
The flow of assets into Octavian's Imperial coffers suggest that our government would be a logical destination.  However, that same government was, historically,  also very  obviously complicit in the relentless, painful, tedious course which led to the problem in the first place.
Additionally, much of the damage done by the illegitimate distribution of wealth languishes all around.  Needlessly living with this neglect has been one of the strong motivators for those who would solve the problem.  However, there is "another layer" of incendiary frustration associated with the wreckage.  Even when those who may have wished to do so sought to collect sufficient resources for such repairs, the illegitimate wealthy routinely looted even those meagre savings before a single bolt could be tightened.
The government was the chief mechanism of the endless rampage.  There were neither bridge repairs nor lower taxes, only more debt, more borrowing, more poverty and more economic, ideological arrogance.  Nothing else was allowed.
Next, we will "design" the economic mechanism which will correct the wealth distribution.  Don't expect a really great, new idea to materialize over night in some Occupy encampment.  For one thing, poor people -- really poor people -- will finally not only have a voice but an unexpectedly loud one.  Not theorists, poor people.  The sort who were dropping the guillotine blades.