Upside Down, Inside Out, Over and Over


No matter how politically "meat handed" the Romney Campaign seems to be, when we compare it to the pro's at the NRA, we have to conclude that the handicap hardly runs in the blood of oligarch class politicos.  Two impressive efforts have recently surfaced to sway voter opinion on gun control, and both reveal the long term goals of the gun business and exactly how valuable achieving those goals are to them.

In fact, quite notably, two of these "gun psyche" opportunities have slithered into the temporary limelight astride the recent publicity of current events.  Both have been exploited to the max in an effort to dissuade voters from even so much as a momentary dalliance, much less a full throated embrace, of any aspect of gun control -- and especially gun control which might negatively impact the roaring US export business for assault rifles.

Don't be confused.  The NRA is the heavily soiled hand maid of the domestic gun manufacturers who provide almost all the money to run the burping, beer drinking thing.  The "shock troops" for the NRA all travel in well lubricated circles among the prepaid ALEC legislative anti-democracy festivals and the back rooms of the oligarchs' palatial country clubs.

You know.  "Back rooms" where oligarchs sit, bathed in luxury beyond imagining, and issue what pass for "representational democracy orders" via  their cell phones.  Where to the "orders" go?  Why directly to Congress, of course.  The marching orders NRA gives to ALEC filter down to the "lesser gun loving souls" at the state level.

The "re-imaging" effort is sophisticated, thorough and cravenly pragmatic.  Where even the smallest opportunity exists for the anti-gun control message to be inserted, a massive, well financed, centrally directed organization stands immediately ready and eager.

The point of this post has everything to do with the NRA's penchant for "re-framing," "re-imaging," "re-emphasizing," "over simplifying," "over sanitizing" and "selected editing" of news stories which could, should they be given "free rein," possibly undercut the near sacred claims of some legitimate connection between the out of control gun makers and the 2nd Amendment's protection.

The "treatment" is so exhaustively applied that a casual "news consumer," already prey to such grotesquely tilted monstrosities as FOX and PBS, has basically not a chance of making sense beyond the NRA's relentless comic book version of the gaseous dichotomies.  At least, this is clearly the ambition of the gun boys' "trigger finger" think tanks. The gun makers' PR experts sleep on satin sheets with the "Pry it out of my cold, dead hands" maxim embroidered in red silk and black powder on the pillows.

The two scandals which can serve as examples here are, of course, "Fast and Furious" and the massacre in Aurora.  Those who "take the bait" find themselves careening instantly back into the very worst, tediously worn parts of the old hackneyed, "fly by" debates we heard first in the seventh grade.  This has certainly been the treatment for both instances on the country's news and opinion cycles.

One has to wonder if anyone could still possibly need to hear the "guns don't kill people, people kill people" claptrap one more agonizing time before finally creating a single thoughtful spark of individual opinion.  Well, MeanMesa has "stepped up to the plate" with an attempt to untangle the word salad, you know, the suspiciously crafted, media blitz word salad with the testosterone vinaigrette dressing -- a long time, red meat flavored, "menu favorite" for the GOP base.

To begin, let's take a look at the what came down the pike as House tea bag, Darrell Issa, bravely led the House Oversight Committee to places where no man, at least, where no contempt charge, had ever been before. 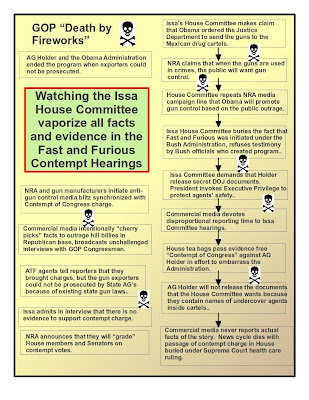 Now, MeanMesa has always been a fan of the House investigating expensive federal policies which have not particularly produced results and which have cost millions or billions of tax payer dollars.  In this sense, Issa's investigation of the Bush era "Fast and Furious" debacle is perfectly reasonable.  The program cost a lot of money, failed to accomplish its presumed goal and, finally, resulted in placing one of the weapons in the hands of a criminal which led to the shooting death of a US Border Patrol agent.

Predictably, after reviewing the terrible original design of the program and its resulting failure to produce cases which could be prosecuted, the Obama Administration's DOJ quietly ended the wasteful disaster.  In case anyone is wondering how such a "pre-packaged disaster" could have been birthed in the first place, visitors here are reminded that during the Bush autocracy hundreds of "biblical law school graduates" from televangelist Pat Robert's Regent University were permanently embedded in the Justice Department.

Permanently embedded, of course, means that these "divinely inspired missionary lawyers" were hired as civil servants who could never be dislodged during any attempt to rehabilitate the Department.  We must assume that this incredibly conflicted bunch busily continues to create such fatally flawed programs even to this day.

If you think such a complaint is exaggerated because MeanMesa "doth protest too much," consider how you would feel if you were going to trial with a "conflicted lawyer."  These "lawyers" work for you.  These are, for instance, the DOJ "lawyers" which Attorney General Holder must use to turn back the voter suppression crimes for the 2012 election.

One could reasonably anticipate that the House Oversight Committee's work would seem, in the usual lackluster manner we associate with Republicans in general, to be somewhat wasteful, pointless and vindictive.  However, in this case, even that characterization of what actually happened in those Committee hearings would be painfully over generous.

Roughly half of the "players" who designed the program and implemented the thing during the Bush years were not "invited" to testify for the Committee hearing.  The ATF agents who brought the failed charges against the illegal gun exporters were also nowhere to be seen.  And the DOJ prosecutors who ran into a rock wall of state law protecting the arms dealers were not to add even so much as a single word of testimony at the hearing.

Instead, Issa's "dog and pony" show played out as if it had been written by one of the illiterate hill billies it was intended to inflame.  Even Congressman Issa himself stated that the Committee very frankly lacked corroborating evidence to bring  a contempt charge.

Not a problem.  The orders from the NRA lobbyists were clear.  Issa and the rest of the tea bag faithful in what used to be the House of Representatives marched lock step to the tune of trigger housing assemblies clicking.  The goofy "contempt indictment" was proposed and passed in minutes.

This embarrassment becomes an egregious affront to democracy rather easily.  Simply imagine any possibly constructive work Issa's Oversight Committee could have done which might have been, well, consistent with their Constitutional duties.

Instead, the House Committee very predictably dumped everything for even a fleeting chance to discredit the President.

The design and implementation of the "Fast and Furious" program amounted to no more than a cheap, adolescent mouse trap in the first place.  Convicted car thief, Issa, could simply not squeeze out any credible tears of "oversight" outrage sincere enough to carry the day.

Boehner frantically buried the thing under the Supremes' health care ruling news cycle in an attempt to preclude any more embarrassment.  And when Republicans scramble to act like this, it says it all.


If "Fast and Furious" Created This Much Havoc,
Where Will the NRA Go With Aurora?


The fast tactics of a practised tai chi fighter anticipate an opponent's over reach.  When blessed with such an opportunity, he will exact the price which must be paid for an attempt to strike while out of balance.

The NRA and its minions had to take a moment to strategize their best response to what happened in Aurora.  Even before the blood and cartridge shells had been cleaned in the aftermath, it was clear that none of the NRA's standard, road weary, adrenaline eliciting, hill billy baiting rhetoric was really going to work that well this time.

This bunch quickly lurched toward the "over extended, out of balance" idea.  The best place for the gun manufacturers and their admittedly awkward PR campaign, at least for the moment, would be to lie low and just let anti-gun sentiment reach the completely anticipated, frenzied "high point" before striking back. 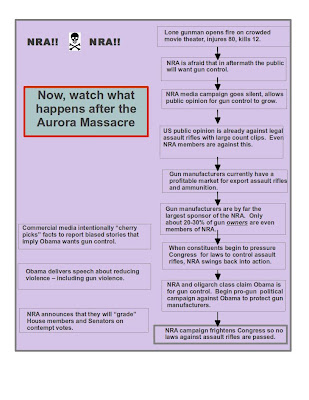 Happily for the gun lobby and the NRA, there is an additional advantage in the current field.  When the gun control proponents have reached their loudest crescendo, the weapons lobbyists will patiently begin not only their routine 2nd Amendment chorus but also include every possible racial innuendo about the President.  When all this is carefully coupled with a well crafted horror scenario about invasion by wrong colored people and the rape, pillaging and general deflowering of an unarmed public, the NRA presumes that it will be on its way to yet another "glorious 2nd Amendment victory."

Mitt Romney certainly hopes so.  However what Mitt is really after is a solid hit on President Obama.  The NRA strategy continues.

The NRA crowd wants more than anything that the gun control tsunami, which is almost certainly en route as we speak, will become married to the President.  Obama has officially spoken already about the violence -- gun and otherwise -- which is gradually saturating the country, and the "gun boys" hope that just the slightest little nudge will re-frame that message into something that at least looks like a wildly reckless total fire arm ban.

It will be a message without substance, but one which can still recruit highly visible support on both sides.  The President cannot divorce himself from that image, and MeanMesa isn't particularly convinced that he even wants such a separation.  Yet, to the NRA's credit, neither of the respective demographics is enough to decide an election.  Although the President will not be particularly interested in using an "army" of gun control fanatics, he will most likely be saddled with one anyway.