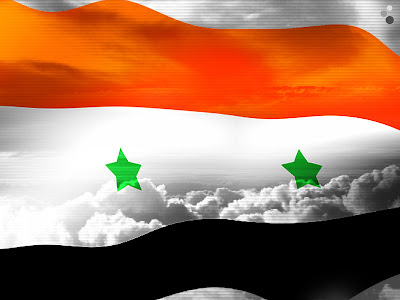 These Videos Cannot Be Confirmed

MeanMesa assumes that our visitors here have all seen the videos.

From Damascus and Alleppo we see the amateur video streaming out to a stoic, unmoved world clinging desperately to its self-definition of outraged civility.  The horror comes in hideous, blood soaked metalevels of hate, terror and intimidation.  Our domestic commercial media finds the explosions on the urban horizon just too tempting to ignore.  Occasionally, an actual reporter with a bullet proof vest has a few things to say from where he's hiding somewhere in the country.  Still, the thing remains comfortably unreal.


No one on your block is frantically trying to keep the kids away from the television until the news is finished.


In those scenes taken from a distance we see billowing black smoke, impersonal evidence of what can be called "artillery horrors."  Those distant explosions can be what we might classify as first level images.


Some of the explosions are the result of helicopter gunships, some the result of air to ground missiles fired from Syrian jet fighters, some from mortar rounds launched, gleefully and ragefully untargeted, on command of some blindly loyal, frightened, Alawite non-com.  And, finally, some is simply the grisly echo of the ballistic screams from World War II and World War I.  Those would be the relentless Howitzers standing off, safely out of reach, pumping high explosive death into the living rooms, playgrounds, courtyards and streets a few miles away.

The attack helicopters look suspiciously HIND-like and Russian from the silhouette.

Closer in, the second level of horror prevails.  There are clouds of snipers not drawing bead on any enemy, but rather any walking target which, if blown apart in everyone's sight, might promote even the most meagre inclination to submit and surrender.  There are tanks, always a favorite of Syrian dictators, belching diesel smoke from one end and countless tons of 50 calibre shells from the other.

The tanks looks suspiciously similar to the old Soviet junkers from the Israel War for the Golan.

Finally, at the third level, that is, at the front door, we see the personal level of the horror.  Thugs from Assad's murderous Shabiha gangs systematically slice the throats of captured children, still in their homes.  However, impersonal the homicidal snipers, helicopters and artillerymen, the door to door "visits" of the truly maniacally homicidal may be the ultimate among all the savagery.

The bombing and the snipers are, indeed, at least possibly impersonal.  The door to door slaughter is personal.  These first few paragraphs of this post are to introduce conditions in Houla, Alleppo, Damascus and other cities in Syria.

Before we can honorably move forward to the rest of this post, we must revisit the "visits."

Your front door explodes into the living room of your house. They hit you on the head so hard that you fall to the floor unconscious for a moment.  When you are able to see again, your home has become a horror.

Two of the seven armed men who have rushed in have thrown your wife on the floor and begun to rape her.  Three others grab your six year old daughter and your four year old son.  They hold the children where your wife can see them.  They pull back the little girl's head by her hair and cut her throat.  Your son is screaming for help, but there is nothing you can do.  His head is jerked forward, and then he is decapitated.

When they finish with your wife, they kill her with a rifle butt to the forehead.  They turn their attention to you.  A rifle butt breaks your left femur and a bayonet knife slashes the ribs under your left arm.  You are unconscious again.  When you awake, you are alone, surrounded by the carnage that was your family half an hour before.  You have been left alive to carry this message to your neighbors.

Are you an opposition fighter?  No.  Were you at the prohibited protests?  No.

You had heard rumors that there was resistance fighting two miles north of your home.  Your neighborhood had been shelled all afternoon.  You and your family had hidden in your house.  There was no light or electricity, just the continual explosions of artillery shells landing all around you and gun fire, some close, some more distant, perhaps a block away.

After finishing with your family, the killers moved on down the street. They weren't looking for anyone in particular.  They didn't have a list of suspected insurgents.  They simply wanted to terrorize enough Syrians so any dream of revolution -- of a Syrian Arab Spring -- would become too frightening. They worked for the government of your country.

Now we're ready for the rest of this post. 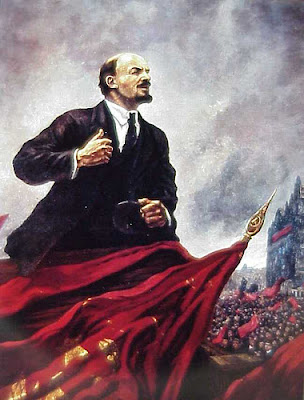 MeanMesa's Personal Letter
to the Citizens of the Russian Federation

Granted, your great revolution against the old Czars received a luke warm welcome here in the United States.  By the end of the Cold War everything you had accomplished had been so thoroughly demonized by the suspiciously biased "Western Press" that only a few shards of fact remained available to someone here who was still able to read a news paper.


However, MeanMesa remains convinced that if Westerners such as Americans and Europeans had a more accurate grip on what conditions had been in Czarist Russia before 1917,  the Revolution there would be seen in a remarkably more favorable light.  Yes, there were plenty of outrages, horrors and other missteps before the thing was finally accomplished.  Yes, there were plenty of equally grisly mistakes made after it was accomplished.


However, regardless of the specific results, the yellow press version of a viral Stalinist nightmare so popular during the 1950's looks less and less credible these days.  This brings us to our point.


The 1917 Revolution was a monument to the bravery and perseverance of the Russian people.  By the time Joseph Stalin had taken control most Russians remained "big fans" of the idea of "Czar free living" even though post-Revolutionary conditions in Russia were hard.  None of you would have presumed that your Revolution had produced a perfect alternative to what had been there before, but in the same breath, almost all of you could easily agree that your Revolution had produced a far better alternative to what you had before.

During that Revolution, Russians all across your entire, wonderful country were savaged by Royalist armies -- some of whom, disgracefully, came from the United States.  You found yourselves facing a crushing disadvantage in your own homeland by the resources which seemed to flow almost without limit to the Czar's White armies.

These days, those memories of desolation and abandonment are a century old.  Your brave grandfathers and great grandfathers were cold and hungry, hoarding cartridges for their old hunting rifles, risking everything to make your Revolutionary new country breathe the fire of freedom.

Your freedom.  Your country.  No Czar.

Now, MeanMesa asks you to rest just one moment.  Think of the stalwart bravery of your own ancestors, their desperation of having to face the Czar's heavily subsidized, well fed, armies -- while they themselves had no boots for the Russian winter.  You Russians know in your passionate Russian hearts which side of this your sentiments seek out and support.

Your Russian blood speaks quiet volumes to you.  You can imagine the atrocities of the Czarists as they moved through the neighborhood where your grandfather's family lived, as they looted the dachas, leaving nothing for the winter, as an entire nation, an entire people, suffered, fought, resisted and, finally, won.

We Americans are now maturing enough to set aside Dr. Zhivago in favor of Eisenstein's Potempkin.

Times seems to try to transform everything.  We Americans share the suspicion you feel yourselves as we watch in horror while our own country descends into Mafia-like oligarchy.  Both Americans and Russians know this cruel sensation.  The ideals of even the recent past have been thoroughly set aside into a place where their inconvenience will not hamper the roughshod ambitions of our newest masters.

Inconvenient ideals such as those which might have defined Russia's place in the Syrian Revolution.

In the United States we have the unending justification of the dead bankers of 9/11.  In the Russian Federation you have the unending justification of  Chechen raiders slaughtering school children at Beslan.  For both stories, our respective oligarchs find a chilling -- albeit convenient -- solace, a disgustingly cynical and destructive opportunity to substitute raw fear for those old ideals from 1917 or 1789 which have become so famous.

Russians, you have quietly exchanged something great and noble for something soiled and disgusting which doesn't speak to your brave history.  We Americans don't offer this criticism from the gaudy idealism of some high borne perch, either.  We are fellow travelers in this descent.

You need to stop your government's sponsorship for what the Dictator of Syria is doing. 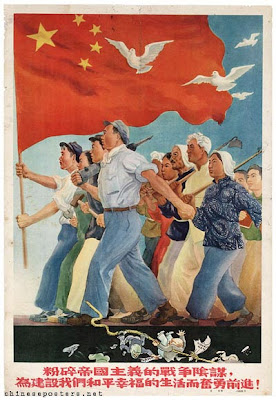 Americans criticize the path taken by the PRC in ways too thoughtlessly similar to our treatment of the Russians.  We routinely launch out on petty tirades which seem to focus exclusively on the modern differences between your country and ours while it seems that we are imagining that China's revolution and resurrection should somehow duplicate our own -- even though the pre-revolutionary conditions in China were almost entirely different.

MeanMesa is no stranger to what was transpiring in the old China in the days of Jiǎng Zhōngzhèng in the 1930's.  Much like the revolution in Russia, the situation had become too brutal, too suffocating, to continue.  Mao tse Sung was not a perfect alternative, but he and his new policies were certainly an understandably better alternative.  The invasion by colonial forces of Imperial Japan was the crucible which forged the old China into the new one.

Chinese, you know the price which you have paid for revolution.  You completely comprehend the desolation of fighting for your own future in the face of a old guard which seemed to receive help without limit from the Europeans -- and, disgracefully from the Americans.  While you suffered bravely through the Long March, you could not count on any one to come to your aid.  The old interests did not withdraw quietly, either.

In their wake you found your countrymen slaughtered.  You found entire villages of rotting corpses, raped mothers, broken children, hungry, terrified  and cold.  When you had finally staggered to your feet, you found yourselves and your country surrounded by the threatening tantrums of those who used to own you.  You found yourselves on those first mornings of freedom staring at a destroyed economy and a society which had been torn and rent into pieces while it was still surrounded by enemies.

Your countrymen were starving to death.

As Chinese, you know these things.  Your fathers and grandfathers bled and died for this revolution of yours.  Of course it was imperfect.  That is the nature of revolutions.  But it was filled with ideals -- revolutionary ideals.  It was a brave, breathtaking, bloody, noble thing.

Now things are better.  Your new cities are filled with cars, flexing their muscles.  The old enemies of China from the days of the Japan invasion now appear, hats in hand, to do business with your prosperity.  Your stock market and banks bathe in an unimaginably bright new horizon compared to those heart breaking days of darkness when all the Chinese knew was sacrifice and suffering.

How can you rest at ease with having become one of the "outside sponsors" of horror in Syria?  Can't you remember?

Can't you remember the vital spark which was the only light in the darkness of October, 1949?  Your ancestors carried and protected that vital spark through decades of dark days and suffering.  Why can you not see the same spark fighting for its life in Damascus?  How can you turn away?

China, stop your government from what it's doing to sponsor the murderous chaos of the old guard in Syria.  You still have ideals now -- just like before.

Russia and China, you won't like how it feels.