MeanMesa is pleased to introduce Cameron Sapien, a guest contributor to the staff of Short Current Essays.

Cameron is a young New Mexican who shares MeanMesa's deep concern for sustainable paths for our state's economic development.  His contributions to posts here on the blog will deal primarily with new ideas for social and economic growth in our area.

Cameron is an under graduate student at the University of New Mexico, Albuquerque, where he studies community and regional planning.  As a life long New Mexico resident, Cameron is anxious to tie his own experience of growing up in our state to issues of opportunities for New Mexicans now; he is also adequately suspicious to the ever more expensive and continuously less effective course we've been on to accomplish something like this recently.

MeanMesa has never been particularly interested with, shall we say, "in the box thinkers," so, being "adequately suspicious" amounts to showing up at MeanMesa's Galactic HeadQuarters with roughly the right things on one's resume. 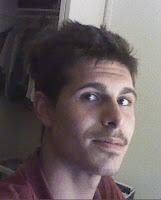 Cameron will be helping prepare a series of MeanMesa posts which propose some interesting new ideas on this topic, so be sure to join us as another chapter of MeanMesa unfolds.

We have to solve this problem soon.  Young New Mexicans like Cameron are literally stuck -- stranded with an economy which won't work for them and a state government which won't fix it.  Every day, week or year this simply continues along the direction it follows now, the more and more young New Mexicans are suffering permanent, life long damage to their chance at some reasonable prosperity.

So, as Eddie Schultz would say, let's go to work.