Bad News From the War on Democracy


This recap of Governor Koch-Snyder's record on the Michigan "right to work for less" legislation offers a good explanation of what he convinced everyone else was actually going to be his position.  We need to tell this story with this time line and a few details.

The easiest way to explain the surprise of Gov. Rick Snyder's move on right-to-work? A brief history of his right-to-work skepticism.


How 'bout right-to-work, a surefire way to galvanize labor support against whoever backs it? "A divisive issue. Union is not a lens I use."

Someone else asked if Snyder supported Michigan becoming a so-called right to work state, where individuals can opt out of joining a worker's union. Snyder said the issue was a divisive one that's not on his agenda. Instead, he said, the state needs to examine the compensation it pays public employees and bring it in line with jobs in the private sector.


When asked about whether he supported right-to-work legislation, which would allow employees to opt in or out of union membership, he said it wasn't a priority because it was too divisive an issue in difficult economic times.


Don't look for the new governor
to immediately firebomb the existing structure. Neither Snyder nor Bernero proposes dismantling the MEDC. Nor will either push a divisive fight to make Michigan a right-to-work state as a way to combat negative perceptions of the labor climate here.

- Detroit Free Press, September 10, 2010
When it came to other business issues, such as a right-to-work law for Michigan that some West Michigan business leaders have been promoting for two years now, Bernero and Snyder agreed in their opposition. Snyder said it would "create a divisive atmosphere that would prevent too many good things from happening.


Mr. Snyder is a bridge builder. He refuses, for instance, to enter the fight over a controversial right-to-work law, recognizing that the fissures such a proposal uncovers are not worth the potential benefits.


Snyder has ruffled conservatives with his stands allowing rape and incest victims to have abortions, and favoring stem cell research. He opposes gay marriage, but will allow civil unions. He says a Right to Work law isn't worth arguing about.


In Michigan, Republican House Speaker Jase Bolger has been leaning toward supporting a right to work measure, but Republican Gov. Rick Snyder has said he wants no part of it.


Snyder did not address right-to-work in his presentation but told members of the news media afterward "it is not on my agenda" because it is "divisive."


The news of the signing was a bit of a surprise, and relayed rather matter-of-factly by the governor. He said he saw how divisive the issue was and noted the large crowds of protestors outside the Capitol, saying he didn’t see a need for a public signing or ceremony. Instead he said it was just time take a position and move forward.

Does this possibly sound like the statements of a Governor who intended to spend ninety minutes from start to finish passing a "right to work" law through the Michigan State House, State Senate and signing it?

The Republicans swept the entire state government of Michigan in 2010, but now -- in the lame duck session after the 2012 election, that legislative "death grip" is fading with each Michigan sunrise.  By the beginning of the next legislature session in Michigan, this will be no more than an ancient nightmare.

LANSING — Michigan became the 24th right-to-work state in the blink of an eye Tuesday after the state House rushed through legislation and Gov. Rick Snyder immediately signed it, capping a day of charged emotions, huge crowds and mostly peaceful demonstrations.

The speed with which the controversial legislation became law left organized labor and Democrats reeling. There is talk of legal challenges and recall efforts. But Democrats and labor leaders say they are mostly focused on 2014, when they hope to regain control of the Legislature and the governor’s office in the face of what they see as a Republican over-reach.

“This is a major day in Michigan’s history,” Snyder told reporters late Tuesday during a news conference, shortly after signing two right-to-work bills approved by the state House Tuesday and by the Senate last Thursday.

The news of the signing was a bit of a surprise, and relayed rather matter-of-factly by the governor. He said he saw how divisive the issue was and noted the large crowds of protesters outside the Capitol, saying he didn’t see a need for a public signing or ceremony. Instead he said it was just time take a position and move forward.

“I don’t view this as anti-labor. I view this as pro-worker,” Snyder said.
Because the new law was designed to include a $1 million appropriation to cover implementation, it can’t be repealed by voter initiative, as the controversial 2011 emergency manager law was on Nov. 6.

But the right-to-work law wasn’t what many of the opponents said they were interested in recalling Tuesday.

“The sleeping tiger is awake now,” Michigan AFL-CIO President Karla Swift told the Free Press. “We have 2014 as a goal to shift out and win justice.”

Finally, we have a close range, eye witness account of just what Governor Snyder did while setting a Michigan record for "high speed ram rodding" legislation.  Of course he was in a hurry.  No doubt the orders to move the "right to work" laws ahead at flank speed had been received from the Koch Brothers or from whomever else the Governor owed favors.

“I had hoped that at the last minute, Gov. Snyder would show a modicum of respect for the democratic process. He chose not to,” said House Democratic Leader-Elect Tim Greimel (D-Auburn Hills). “An issue as momentous as bargaining rights deserves an honest conversation and careful deliberation. Instead, Gov. Snyder and legislative Republicans pulled out all the stops to rush these bills through at a breakneck pace, without any opportunity for public comments, making a mockery of democracy in the process.”

Gov. Snyder signed the bills around 5:40 p.m. Tuesday, five days after the bills were first introduced and just three hours after the last of the bills cleared the legislative process. The bills received no hearings and the public was given no opportunity to give testimony. On Tuesday, 12,500 people showed up to protest the laws, but Republicans disregarded their objections and ramrodded the bills through the Legislature. The “right-to-work” laws contained an appropriation, a measure intended to make the laws referendum-proof, further denying residents an opportunity to have their words heard.

“The citizens of Michigan deserve so much better than this,” Greimel said. “What happened today was a travesty and an insult to democracy. The House Democratic Caucus vows to explore every legal avenue to overturn these bills that are bad for our economy and bad for middle-class families.”

While Michigan might, at least to the eyes of a casual observer, seem to be a more or less normal state in the United States, it might be worthwhile to try to view a larger picture.  The billionaire Koch brothers must have phoned Governor Snyder with the now utterly commonplace "oligarch message."

"Destroy the unions at any cost.  If this means that you will be a one term governor, so be it.  Don't worry.  When you lose the next election, you can come work for us as a lobbyist in one of our Koch think tanks for a million dollars a year."

"Now, that won't be so bad will it?  By the way, if you dare to not follow our orders, we will make sure that you will still be a one term governor, except after you lose the next election to whatever candidate we decide to give the money to, you won't have a million dollar per year lobbying job."

Understandably, Governor Snyder was much more afraid of the Koch-cash machine than he was of the silly oath of office he drooled through when he got his present job,  As is usually the case with Republican controlled states, "Everyone who doesn't have a lobbyist -- or, in this case, a billionaire backer -- bleeds."

So, is MeanMesa's Michigan Travel Advisory an exaggeration? 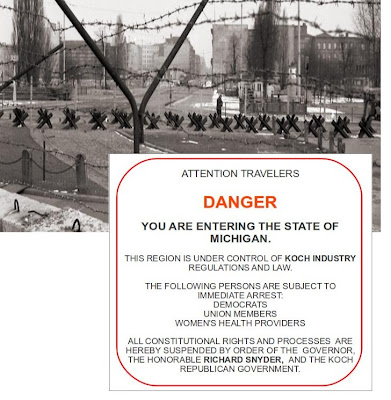 Hardly.  It may not seem like you will be forfeiting your Constitutional rights as you cross the border, but think again.  This thuggy bunch of tea bags, although in panic mode right now because they just lost big in the 2012 election, clearly intend to loot every possible wet dream they've been given by their cash masters before they leave Lansing.

They have shown, referring to the excerpts above, that they are willing and eager to undertake any outrageous "over reach" their bosses assign to them.  They've passed a few hundred bills repealing and refusing ObamaCare, a few hundred bills outlawing abortion -- each one flying in the face of standing Supreme Court decisions, a few hundred bills opening the state's coffers to every dirty shirt "capitalist" the oligarchs send down the road and now, they've repealed most of Taft-Hartley in a matter of three days after promising that they wouldn't.

Hmm.  Going to Michigan?  Really?  This is not a safe place for an American who doesn't have 1. a lobbyist or 2. a billion dollars worth of ready cash.

There's no telling what they will do next.  Don't go there and let them do it to YOU.