This Ain't the Grover Norquist Pledge

Let's assume that Grover could not help growing up and bulging out into the current sociopathic mess.  We can also assume that his mother taught him that stealing Social Security from old people was a far less exhausting career than, say, plumbing, or perhaps, simple leg breaking for the local drug dealer.

Grover's "eternal no tax" pledge is well known among MeanMesa visitors.  Any little Republican puppet of the oligarchs who dares "cross that line" sees his political career future vaporize just moments before he is cast into the hell fire of a super financed primary.

The hill billies and bigots who make up the tea bag gang know all the details.  The threat is a real one.  Grover's oligarch masters looted the Social Security Trust fund during the dark days of the unelected autocrat.

Does this mean they just pried open the door and walked away with the money?  Perhaps a heist something like the scheme of Viceroy Bremmer in Iraq when he was "passing out" $100 Mn dollar pallets of bundled US $100's?

No, of course not.  Even part of the Republican base is smart enough to recognize something like that.  Current polling estimates suggest that many of the Republican voters across the country can actually tell the difference between "being robbed" and "not being robbed" -- even without the help of the FOX "news" explanation.

Grover's crime buddies sold US Treasury notes to the Social Security Trust fund to finance their out of control Republican borrow and spend festival -- so many of them as to amount of an almost inconceivable "cut" of the $2.6 Tn in the Trust.  Now they're stuck.  They borrowed every nickel they could find, and now, since they are so incredibly bad at governing, they're in a panic. 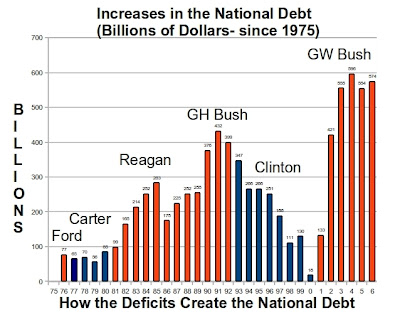 Who wouldn't be in a panic with this monster chasing you?  Grover's trained "penny pinchers" plowed through around $5-7 Tn dollars worth of tax payer money just during the Bush autocracy alone.  All this "red ink" doesn't really bother the oligarchs as much as they're letting on, either.  They are collecting the interest on most of this "debt."

Grover never quite got the message, and now, after the Republican election disaster, it's clear that he isn't any closer to "getting the message" than he was before. [Data for the chart above came from the Treasury Department during the Bush W. "presidency."]


Grover's scheme, the one assigned to him by the oligarchs who own the Republican Party, is to scream about spending cuts, terrifying the voters, until everyone's "on board" with cutting "entitlements."  Any Republican toadie who doesn't fall into lock step with Grover's scam faces a primary contest funded by the billionaires -- the same ones who want the Social Security Trust handed over to their Wall Street Brokerages.

The fact that the voters are "entitled" to the "entitlements" because they paid for them doesn't have a chance to see the light of day.  The $ Trillions in the Social Security Trust Fund are the last huge pile of money the GOPCons haven't already gone through.

Grover's "Pledge" which most of the Republican House members have sworn to with a blood oath, is to never raise taxes under any circumstances, ever, no matter what.

It's directed at the other old folks, the grey haired troops who vote in every election.  Some of us are beginning to have a few memory problems, but we promise to talk to each other, promise to remind each other.

We could go on for years.  With our list.  Voting in every election.

"We pledge to take down the names of every politician who votes to cut Social Security, Medicare or Medicaid benefits.  We will work every day for the rest of our lives to see that not one of these crooks ever wins another election."