So. You Have A Problem With The Drones.

The Common Popularity of Criticizing the Drones

MeanMesa generally strives to keep the blog world tastefully separated from what runs along the social media wire.  Having said that, there are always exceptions.

Of late, the social media has been populated with an increasing number of comments which are quite derogatory about the decision to use drones.  The negative comments, naturally, include no shortage of references to the "other people" who die as US CIA drones target and strike enemy hostiles.

Even Dr. Maddow on her television show has not hesitated to portray the drone war as not only lethally impersonal, but also, admittedly, not as pristinely "surgical" as she would prefer.  There are deaths beyond the drone's target in a majority of attacks.

Here, MeanMesa can offer up one its own famously iconic comments:

"There is nothing which can be done with the reality of military combat which will make it palatable to civilians."

Prosecutors complain that they find themselves answering questions based on television's CSI version of forensic investigation as they present cases to a jury. Likewise, with respect to just about any form of military combat, civilians have probably had too much of the "television version" of such violence to deal with it from a point of view consistent with a more coldly accurate picture.

Dr. Maddow did offer another comment on the subject of drones.  While lamenting the impossibility of actually having a relevant debate over national policy during the last election campaign, she specifically mentioned the use of drones as one of the issues for which she would have liked an opportunity to debate.  Such a political debate during the election campaign would have been the correct arena for civilian inquiries and opinions about the tactic.

During the debates, the GOP and Mitt Romney, of course, would have none of it.  Because our gravely crippled political process failed to host such a debate, MeanMesa will step up to the plate to host our own.  The silence hardly implies irrelevancy.

Welcome to the World of "Necessities" 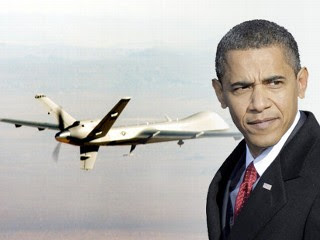 The complaints are familiar.  The drone attacks are characterized as "assassinations," and the other accompanying complaints are primarily about "innocents" killed as a result of their proximity to the targets.

Additionally, there are predictable "tormenta syntactica" which usually get breathlessly "added" to these painfully ingenuous, heartfelt efforts to root out and expose any hypocrisy hidden in such policy.  By this, MeanMesa refers to policy decisions constructed in response to "conditions on the ground" rather than imaginary high borne alternatives based on great action movies one may have seen.

The lands these American drones fly over daily are not too much similar to those movie sets, and the targets selected for these drone attacks are not particularly similar to the scripted villains in those movies, either.

Further, as we look at Obama's challenge, there are even more facts in the matter which have quickly fallen prey to neglect by the same purists.  The Commander in Chief found himself neck deep in these reckless, floundering military adventures one second after raising his hand at his first Inauguration.

Don't kid yourselves.  The brutally effeminate psychopath he replaced had relentlessly managed to terrorize, cripple, expatriate, mutilate and infuriate a majority of the seven billion people with whom we share this planet.  For the critics of drone war, these realities must have already conveniently vaporized into the misty gloom of equally convenient,  forgotten yesterdays.

Bush declared war on anyone who would not submit.  Bush knew it, and his victims knew it.  If you don't know it, your usefulness is grimly measured by that "fact free" bliss.  Worldwide, Public Enemy Number One was the guy we sent to the Oval Office. Remember, the British medical journal, Lancet, estimated one million six hundred thousand Iraqi war fatalities after the autocrat's "Church of Death" had visited that unfortunate place.

A Native American acquaintance used the penetrating phrase "the dark wind" in a conversation about dying.

These are a few examples of the most irritating among these critiques -- aside from those others mindlessly uttered by the outright racists, of course.

We can examine the representative samples individually.

1. What have they ever done to us?

If there is some shred of truth buried in the 9/11 Report somewhere, the easiest answer might be that "they" have done quite a bit to us.  However, the current survivors of the "bad guys club" who are left walking around the desert today didn't actually have all that much involvement with bringing down the Towers or punching a very suspiciously shaped hole in the Pentagon.

2. What have we ever done to them?

Although some serious media management has recently been dedicated to the idea that we actually never did anything to them, even the most casual glance at recent history suggests otherwise.  Perhaps we can remember the sickening simplicities of the Bush/Cheney mind bending machine:  "They hate our freedom."

Al Qaeda was not born in a moment of simple, spontaneous, vengeful coincidence.

American "free enterprisers" have long considered the region nothing less than a career opportunity or another of their corporate profit centers.  Far from stopping this pernicious misconception, the American government consistently "egged" them on further.  The American government was also inevitably infatuated with this program of manipulating governments, installing violent dictators and supplying plenty of the most horrible weapons in our arsenal to fortify the positions of our puppets.

Mouthing this line might go a long way toward establishing oneself as "above the fray" or as a long suffering "peace lover," but it doesn't change the reality of the facts.

They want to fight us. They've already made that abundantly clear.

Worse, we see little prospect that adopting "not wanting to fight" as our policy would be likely to elicit the same sentiment on the other side.  We continue to indulge ourselves in an international, geopolitical, cognitive disconnect -- one further inflamed with way too much ridiculously passionate wishful thinking.  Few Americans have ever been as pissed off as these folks are.

All of the country's higher ground position as the "Shining City on the Hill" was thoroughly vaporized by the brazenly public atrocities we committed a few years ago.  When we consider the seven billion folks with whom we share the planet, at least four billion of them know all about these torture and humiliation penchants.  The only sizeable population which seems to not know or not remember live here and listen to FOX News.

The United States can, possibly, rehabilitate our world image, but the other thing the world now knows is all about the Republicans who now scheme to control our government from their current position of minority and exploited electoral treachery.  There is no way to restore our image, or even, perhaps, to establish such an image for the first time, when we have a nationally covered Presidential candidate publicly stating that the Russian Federation is our main enemy.

Granted, the Russians would probably be a more convenient enemy than the ones we've actually created for ourselves.  Such a development might breathe some renewed validity into the gigantic Cold War junk yard of dilapidated equipment we now purchase annually -- year after year -- like junkies buying heroin.  It would also greatly simplify the problem of embracing the new ideas and changed conditions which seem to be such a mental obstacle to Republicans who are still firmly, colonially anchored in the last century.

Unfortunately, the list of "really good alternatives," when examined in hind sight with more sober eyes, is alarmingly short.  It turns out that George W. Bush's "foresight" was disgustingly and dangerously "myopic," but the durability of the disaster he engineered with his cronies is remarkable.  You know.  It's the gift that keeps on giving. 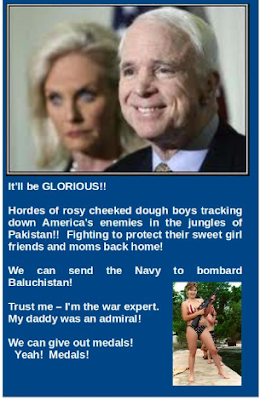 Only, of course, bloodier and more painful.

Bush Jr. often noted that he was "listening to the officers on the ground."  If he were, actually, heeding the advice from such voices, it was incredibly -- historically -- bad advice. To pretend otherwise as some sort of justification for complaining about the drone strikes is patently vacuous.

The "alternatives" for Obama's drone war are three fold.

1. Simply quit.  Leave the folks who are determined to injure the United States in any possible way where they are.  The back woods of Yemen or the dismally violent provinces of East Pakistan are already "points of departure" for these ambitions.  If the military/CIA action against these individuals ceases, all this will simply remain in place.  We all know where this goes.

2. Revert to conventional "John McCain style" military adventures.  Before Mr. Bennan, likely the architect of the drone idea's inception, took charge, the attacks against Al Qaeda leadership were routinely carried out by fighter bombers.  The large number of collateral injuries and fatalities was abhorrent on its face, but also seriously counter productive with respect to the geopolitical damage being caused.

Brennan's nomination hearings for CIA director before the Senate will probably bring out some of this information.  MeanMesa suspects that the Senators will be particularly interested in the precise legal and administrative foundations for the occasional assassination of US citizens abroad.  If you find this particular aspect of the drone wars to be obnoxious, refer to item one, above.

3. Keep going.  The drone attacks have been incredibly successful -- even more so when they are compared to the essentially incomprehensible strategic lurches of the Bush Jr. government.

The jihadists of all complexions radically transformed the "rules of engagement."  They had to.  The asymmetric solution they adopted was an effective one.  Folks like the late bin Laden knew that an eye to eye show down with the US military would be a quick disaster, and this new version was, given the realities of the moment, "just what the doctor ordered."

Now, we have to be careful not to fight the wrong war.

Either learn to live with the drone attack strategy, or buy a bus ticket for your son to get him to the induction center.

A Few, But Not Too Many, "Slippery Slopes"

After reading the memorandum, MeanMesa must report that there certainly didn't seem to be anything particularly unexpected in it.  However, this was not the case with the breathless "nose bleed" pundit crowd who, dutifully, began at once with hypotheticals of politically targeted drone assassinations in the suburbs of Duluth.  Further, those hypotheticals were not limited to the wing nut righties, either.

The President is taking his responsibilities as Commander in Chief quite literally, again, a stark departure from his Dr. StrangeLovian predecessor.  He clearly has no intention of another bloody Bush W. "Oooops" on his watch.  Where there are enemies of the country, regardless of their nationality, regardless of where they may be, regardless of the absolute legitimacy of the rules of evidence involved, the President has ordered that we act.

The stark political cynicism of the reactionaries reveals no umbrage whatsoever.  If another 9/11 can, somehow, be "helped along" by this Senate mischief, they are all for it.  If there can be a "trade off" between the smouldering ruins of another attack on the homeland and permanently displacing the black President, they are morbidly eager.

On the other hand, the President -- a civilian -- offers the real choice to the Americans.  In his interview with John Stewart Obama parroted the same phrase FDR used to cast the gambit to citizens.  This time it was the drone question.  "If you are a responsible citizen in this democracy, and this drone strategy is abhorrent to you, I'll stop it -- but only if you 'make me do it.'"

President Obama has, in the past, done his job.  He is, presently, doing his job.  There are no hidden atrocities.  As tax payers under both Obama and Bush Jr. we have signed the death certificate for every corpse we've created.  Pretending otherwise will not make the outrageous perfidy of Bush Jr. and the oligarchs simply go away.

MeanMesa's compliments to the President.