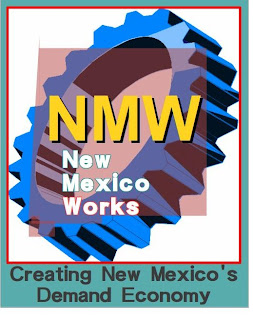 The Next Idea
for Economic Growth in New Mexico


In MeanMesa's previous posts about growing a demand economy in New Mexico we have focused our attention on the local manufacture of affordable, efficient, insulating windows.  In those posts a few fundamentals were repeatedly emphasized -- most notably, the idea of economic growth based on local demand.
The subject of this post continues with that central theme.  While the previous posts focused on conserving natural gas which is being wasted by inefficient windows, this post will focus on another commodity which impacts the monthly budgets of most New Mexicans:  water.

There is a very persuasive "cluster" of non-controversial issues surrounding this particular demand economy target.  When the monthly costs for water usage are reduced, discretionary consumer wealth -- in this case, the money left after paying the monthly bills -- will increase.  Expansion of the local demand economy is, of course, tied directly to how much money New Mexicans have in their pockets.

Some Propositions in the "Cluster"

1. The general drought pattern for the State along with new concentrations of the population have increased the cost of residential water service.  This situation can probably be expected to not only continue, but grow even more severe as gradual climate change impacts historical weather conditions -- especially annual precipitation levels.

2.  Infrastructure improvements have eased Albuquerque's water supply problems, but now, the State of New Mexico is facing a lawsuit from Texas water users over the amount of water being diverted by the successful San Juan-Chalma drinking water project.

3.  The cost of water prevents other potential areas of economic growth which could have been possible with lower water costs.  One particular example of this is the encouragement of residential vegetable gardening.  This may seem to be a rather indulgent, flippant, urban idea, but the State of New Mexico has vast areas where it is simply not possible to purchase fresh vegetables.

The cost of mitigating the effects of the subsequent wide spread malnutrition is currently draining State resources, inhibiting growth of discretionary spending -- especially in rural areas -- and limiting the growth of a local demand economy.  Of course there are health and developmental problems, but these are not the sole costs.  With very little imagination we can add the additional costs of substance abuse, incarceration, systemic depression, obesity, unwanted pregnancy and many others -- all indirectly connected with fundamental problems of nutrition.

The cost of water also impacts possibilities for direct economic development.  Local companies might have started if water costs had been lower.

4.  The allocation of State and County resources has, so far, completely avoided increases in water use efficiency and decreased costs which would be made possible by adopting the "two tiered" system.  "Tier One" would be for potable water used for drinking and residential home use while "Tier Two" water would be used for all the other water demands.

If this were to become the "new normal" for New Mexico's urban water use, the current demand volume and the current costs of water purification would be reduced considerably.  Implementing such a plan would not be "rocket science," but it would require a legislative commitment we haven't seen in the Round House.

Reducing the costs of day to day water purification and delaying or completely avoiding bond funded infrastructure additions to the water supply system would provide lower monthly costs to hundreds of thousands of New Mexico families, increased discretionary spending capacity and, of course, creating new, beneficial conditions which would be moving us toward our demand economy.

5. Our history isn't helping.  Years ago, New Mexico's local oligarchs -- perhaps a 19th Century version of our modern ALEC parasites -- handed a crippling gift of water rights to their friends in Texas.  The law suit mentioned above is one of the unfortunate consequences, but there are others.  The point here is that any rain water which lands in New Mexico belongs to New Mexico -- until it gets to the Rio Grande River.  Bear this in mind as we continue with this post.

[This suggests that a future posting at MeanMesa should cover the aquifer rehabilitation and replenishment project which proposes the re-injection of solar distilled, surficial run off into our diminishing local aquifer.]

We should also spend just one more moment reviewing a few of the common metrics for water supplies.

The size of reservoirs which are included in most "big picture" water projects are measured by the retained water in acre feet.  An acre is generally an area measure, and we can visualize an acre as a square with sides of 208.72 feet.  When this metric is applied to the amount of water which can, for example, be held behind a dam, it refers to a volume of water with a surface area of one acre and a depth of one foot.  This volume is called "one acre foot" of water and is equal to roughly 326,000 gallons of water.

To bring this home to New Mexico, we can look at the Elephant Butte reservoir as a near by example.  Surface water from around 30,000 square miles of land upstream from the reservoir drains into Elephant Butte.  When the reservoir there is filled, it contains around 2,000,000 [2 Mn] acre feet of water.

Without delving into the confounding numbers which describe the subsurface aquifer which still supplies Albuquerque with much of its potable water, let's just say that 1. that aquifer is being replenished at about half the rate at which it is being depleted, and 2. while some of the local rain fall seeps down to refill this aquifer, most of the surface flow which lands on Albuquerque when it rains drains into the Rio Grande River and flows on to San Antonio, Texas, and points beyond.

By the time the Rio Grande reaches the border of Mexico, one can literally step across it without getting one's shoes wet on most days.  The drought conditions which have visited the region for the past few years haven't helped.

Now that we've covered a few fundamentals, let's get to some solutions.  How can this present situation be transformed into something else which might support a demand economy while also solving some of these other problems at the same time?


Even though Albuquerque has taken steps to mitigate this problem -- water conservation policies and the San Juan-Chalma project, for example -- the monthly cost of water service has not only steadily increased but will continue to increase.


The structure of these programs would be the same.  In fact, much of the administrative costs for this suggestion can be integrated into the corresponding costs of the Windows Project.  Let's look at the details.

The over all idea is quite simple.  New Mexicans capture rain fall before it enters into the "water rights" problem when it becomes part of the Rio Grande River.  This is accomplished by the area wide installation of residential rain water cisterns.  The rain water collected in these can replace the far more expensive potable water currently used for all sorts of purposes -- everything from washing machines, lawn irrigation, car washing and, importantly, residential gardens.

While the example being cited here is primarily directed at the urban  Albuquerque area, the applicability of this idea extends quite readily to the most rural areas of our state, too. The wide spread introduction of "cistern reservoirs" can make the biggest impact on those areas where the water supply is already currently stressed.

The cisterns are designed to be low cost, durable and easily installed.  The design task is well suited for New Mexico's state universities.  Much like the design of the insulating windows, the cistern design could be presented as a contest rewarding the winning idea with a special scholarship.

The cisterns would be manufactured in state in a facility staffed with New Mexicans and initially subsidized by state money.  The cistern manufacturing workers can be trained in the same facility where the window manufacturing labor is trained.  This would be a "common sense" alternative to the complicated -- and suspiciously expensive -- "job training" expenditures currently being backed by the Governor and her ALEC cronies in the Round House.

Home owners across the state -- importantly including those with rental properties of all sizes -- could apply for a State guarantee on loans to purchase and install the cisterns.  These loan applications could be handled administratively by the same staff resources which handle the similar loans for efficient window purchase and installation.

The cistern design should include a variety of accessories tailored to fit individual residential installations.  For example, a low cost electric pump or a manual pump sized to meet the planned usage of the rain water should clearly be included.  Likewise, rain guttering and down spout materials should be available along with the cisterns as a necessary part of the installation and a part covered in the loan amount.

It would probably be best if all the cisterns were manufactured in one size.  Applications requiring a larger reservoir capacity would be handled by multiple cisterns rather than unworkably larger versions.  Cisterns could be installed below ground or on the surface, depending on the site application.

A reasonable design criteria would provide the complete cistern purchase and installation for less than $1,000.  This would include transportation.  For rural applications, transportation costs could be mitigated by "group installations" where a single truck could deliver multiple cisterns while also carrying whatever equipment and labor which might be required for the installations.

A rough estimate of a possible cistern size would be around 3 feet in diameter with a height of around six or seven feet.  Although corrugated, galvanized culvert tubing would be one option, there are almost certainly lighter weight, less expensive alternative in PVC or other material.  A simple particle screen filter, a wood cover and standard hardware to insert drain hubs and hose bibs would complete the "package."

Although 10,000 cistern installations filled with rain water would amount to only a couple of acre feet of water saved, the actual economy of such a project would only be just beginning. Naturally, we would want to assume that the cisterns would be filled numerous times throughout a year of service.

Right away we can add more cost savings -- from not having to treat the cistern water, maintain potable water piping, or operate a water utility with the inevitable administrative costs such as billing and so on.  Before too long, all these savings would begin to manifest themselves as they gradually accumulated in lower monthly expenses and increased discretionary income for New Mexicans.

Next, we come to jobs.

At the on set, we will not only be hiring workers to manufacture the cisterns but also workers to build and maintain the facility, operate the warehouse and handle the business aspects of the new industry, including the sales and financing mentioned above.  Naturally, the project will involve significant trucking to move manufacturing materials to the site, too.

Once our New Mexico cistern pant is producing cisterns and selling them to other New Mexicans [remember...a local demand economy], a good number of installation crews will be needed. These cistern installers will need to be trained, managed and paid.

The project will need trucks to transport cisterns, installation crews and equipment to installation sites, too.  Every one of those crews will require insurance, on site management and so on.

At the bottom line the New Mexico economy will not only be receiving the consumption of the money saved from lower monthly water bills, but it will also be receiving the purchasing power of all these pay checks every month. Further, the property tax increases needed to finance large water supply infrastructure costs may well also be reduced over time.

The Governor has just allocated another $10,000,000 dollars worth of state money for "job training."  [Read the MeanMesa post on this subject: NM Jobs: It's Not Working! Do It Some More! ]

Is any of this giving anyone any ideas?