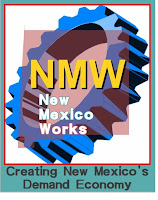 
The isignia just to the left is a clue that this post is another in MeanMesa's continuing series of suggestions for the growth of a demand economy in the State of New Mexico.  In each case, these posts pose another possibility for growing a robust, functioning economy by adopting courageous new plans or simply encouraging our State Legislature to "roll up their sleeves" and take a few common sense steps to reduce the unemployment, increase the disposable income in the pockets of New Mexicans and generally open the door to a promising new economic future.

The "demand economy" idea is simple enough.  Instead of our present infatuation with manufacturing private jets, fabricating high tech computer chips or promoting orbital sight seeing cruises for the rich and famous, we can build a self-sustaining economy which can offer thousands of New Mexicans a job, an income and a real opportunity for a prosperous, satisfying life.

Right here.  Right now.  Built on what we already have.  Built by the people who already live here.


We've already looked at manufacturing efficient thermal windows and residential cisterns.  This post looks at a remarkable agricultural possibility which seems to just be waiting for someone to "start the engine."


A Quick Over View of New Mexico Agriculture


The leading farm "business" revenue for New Mexico is solidly from dairy products and live stock -- primarily cattle and calves.  Predictably, the State's largest agricultural crop is the production of hay to provide the feed necessary.  Even so, due to the State's growing conditions for hay, a large percentage of this livestock is exported to "greener pastures" for feeding prior to final slaughter.

In terms of "grown crops," the largest revenue is from pecan orchards -- 3% to 4% of total revenue.

Of course, New Mexico also produces its famous green chilies, widely considered a delicacy and a limited size but very profitable agricultural product.  [This information is from the New Mexico Economy Section of this site: http://www.netstate.com/economy/nm_economy.htm ]

New Mexico has over 5,500 farms that grow directly about 50 edible crops (and endless varieties). Santa Cruz Farms in Española, for instance, grows 76 crop varieties of 3.5 acres. Chispas Farms grows 50 varieties of garlic for sale and over 300 to save the cultivars! The number of both truck market farms and crop varieties planted has continued to grow over the last decade. Top commercial crops for the mass market are: pecans, onions, greenhouse nursery crops, chile (see Boxes) and winter wheat (286,000 acres). Peanuts (about 10,000 acres), potatoes (about 5,500 acres), sweet corn and dry beans (about 7.500 acres) are important in specific agro-ecoregions. There are many farms growing apples (over 900 totaling over 2,000 acres), and over 1,000 acres each of grapes, pistachios, pumpkins, rye and watermelons. Most of the top crops are exported.

Given this mass-market production and local market diversity, New Mexico could eat well (in season) perhaps 50% or more of its edibles from foodshed farms. The exact amount will depend on crop-specific assessments to see what import crops can be most easily substituted and the willingness of farmers to grow the crops.

The typical New Mexico farmer is nearly 60 years old and may not be eager to redesign his or her business. Nevertheless, with good farmland decreasing, an unknown number of these farms and farmers will need to change crops to fulfill the dream.

How can government, private investors and nonprofits help increase farm gate profits and direct edible crops into local markets? A good example was the State Memorial to bring fresh, local foods to schools. The Farm to School program requires farmers to carry a one million dollar insurance policy, to harvest less than 24 hours before delivery, package in three-pound increments, and label each box with the farmer’s name and the package’s destination. Despite this extra insurance and work, this exclusive market segment stabilizes and reduces financial risk to the crop farmer, who knows in advance how much will be bought and at what price. Institutional markets help farmers switch to a new agrarian economy. 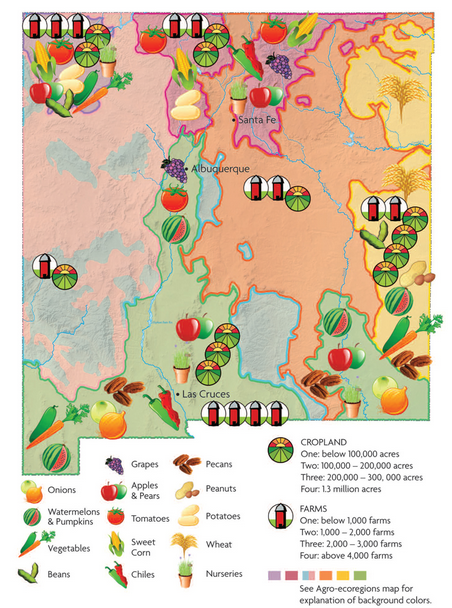 Some believe water will be more important than energy in the near future. New Mexico uses about 75% of all its water for irrigation. Water disputes rage over irrigation between: New Mexico and other states, tribes and nations; urban growth and farmers; outdated water rights rules and modern understandings of the connections between groundwater and surface water; farmers and the state on issues such as who owns conserved water; and many more. Water and energy have become entangled with farming as a major energy need: pumping groundwater and treating wastewater to meet water qualities demanded by downstream users. Water needs for power plant cooling (coal, nuclear or solar thermal) conflict with irrigation needs. The energy to desalinate brackish waters will limit new water sources for New Mexico.
Water is “Don Divino,” the divine benefactor of sustenance. Native Americans have worshiped and danced for rain for thousands of years. When local foodsheds were the only foodsheds, water was life. Today there are great disharmonies between humans and water resources. Water can be viewed as a monetary commodity, an option for growth in the future that must be “banked” in the present, or for its intrinsic worth to all life (fish, trees, riparian birds). Water is central to defining a moral economy. 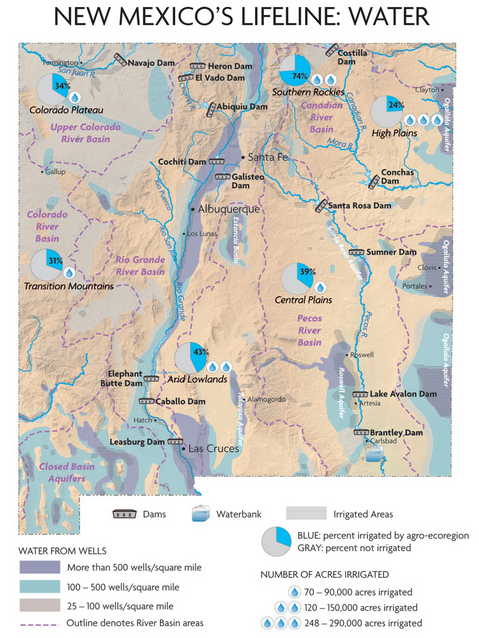 
New Mexico's agricultural production, the revenue it generates and the jobs it provides are all limited by water availability.  This is hardly a shocking revelation.

However, in terms of both the economic growth potential of the state and the number of jobs in the agricultural industry, it's clear that the best business models will be based on producing the agricultural products which are most profitable.  With respect to marketability and the margin between production cost and potential sales prices, our famous apples, pecans, cherries and chilies seem to stand out above the others.


The most successful agri-businesses produce the greatest discretionary income, the most jobs and the greatest foundation for the systemic wealth which can be the engine of a demand economy.  The better individual New Mexico businessmen -- in this case farmers -- can do, and the better that New Mexico workers -- in this case farm workers -- can do, the closer the state will move toward a local, sustainable prosperity.

There is no single solution for New Mexico economic growth.  What we want to do is to start thinking about a whole set of new ideas, each one of which can add a little or a lot.

So, we're looking for an addition to that list of high profit, good market products above.  Further, MeanMesa has no intention of conducting that new product search while imagining that New Mexico has just as much water and arable land as, say, Ohio. We will definitely have to work with what we've got.

Farmers are famous for their common sense.  The final test for the proposal in this post will be whether or not New Mexico farmers think they can make a better profit with the new opportunities it might present.

Let's eliminate  a "big dose of the flying fur and feathers" right off the bat.

A number of states, notably Colorado to our north, have recently decriminalized the possession of small quantities of marijuana.  Quite aside from the more Libertarian reasons justifying these changes, the sheer cost of massive prison populations, tied up judicial systems and police departments which are naturally, overly attracted to these essentially effortless arrests have finally reached a "common sense" tipping point.

One further point, most agricultural hemp has a THC content [the psychotropic ingredient in marijuana] in the .3% range, far below what would be required for the inebriating effect.

Of course this same change would benefit New Mexico's state budget just as much. [MeanMesa has posted on this subject before: Fixing New Mexico's Budget and Prisons ]  However, this post is not about legalizing marijuana.  This post is about the business prospects of growing hemp agriculturally.

The reason that hemp agriculture is illegal right now comes from several suspiciously advantageous judicial rules from decades ago.  As late as during World War II, the Defense Department actually encouraged farmers to grow the crop because it was so widely useful for the war effort.  After the war Southern cotton farmers influenced the Congress to pass the anti-hemp laws to protect their already dwindling [off shored...] cotton markets.

The anti-hemp agriculture laws never particularly had anything to do with smoking marijuana.  That was a primarily racist inflammatory injected into the mix in hopes of firing up the under informed electorate of the 1940's, a period we now know as the era of "Reefer Madness."

When we look at hemp agriculture through the lens of a more modern technology, we find a number of tantalizing possibilities.  Further, these are not simply flippant prospects founded on the "flame value" we might find inadvertently attractive for being the fist state to challenge those now pointless old Federal statutes.

The crop can produce plenty of commercially profitable products -- everything from compressed hemp building supplies to a very competitive biofuel with quite attractive emissions chemistry.  Various strains of hemp are currently in production across the planet where agricultural laws are, shall we say, somewhat more rational.

All this may appear a bit encyclopedic, but ... what if agricultural hemp products, grown on farms in New Mexico and manufactured in facilities in New Mexico, actually held the promise of being a commercially profitable industry?

And, while we're on the subject, what if that new industry could also promise sustainable manufacturing jobs for unemployed New Mexicans along with increased agricultural revenues for New Mexico farmers?

How We Get Started

The inhabitants of the Round House will be, predictably, uninterested in such a controversial proposal unless it is based on well conducted research.  Not even famously impulsive MeanMesa would suggest simply diving into this filled with wild expectations while wearing a blindfold.

Still, shouldn't we find out the facts?  If it turns out that this proposal doesn't make sense, we can shelf the whole works and return to whatever we were doing before to increase economic growth in the state.

It so happens that the Round House crowd loves to hire consultants from Texas to figure out just about everything.  When those consultants hand over the results of one of their famous investigations, the Round Housers take it seriously, Otherwise, dreams die by the dozen right there in Santa Fe.  The price we pay for this stunning lack of imagination is dumbfounding.

This particular research task won't need to be handed over to out of state experts.  Our legislature is subsidizing a nice collection of state universities -- some of which contain some real talent, in this case, agricultural engineers.  One or more of those agricultural engineering departments would jump at the opportunity to land a nice sized State grant.

This research project would encompass other areas, too.  Markets and products will need to be explored.  Manufacturing processes must be examined. The economic and environmental impact must be studied. Soil, climate and water questions must be answered.  However, our universities have plenty of talent specifically focused on every one of these areas.


After such an investigation has been conducted for, say, a year, the results can be handed to the Round House with fairly strong confidence.  Then a decision can be made.  If the proposal has merit, a pilot project can be started a year later.  Cash-wise, the money spent for this would 1. pale in comparison to what we pay daily to out of state consultants and experts, and 2. would wind up funding engineering departments right here in New Mexico state universities.

This one deserves a vote.

If you are a New Mexican fortunate enough to have an actual Representative -- one who actually read your letter or email -- drop them a note.  Refer them to this MeanMesa post.

There are plenty of pro-hemp sites on the internet, but a particularly useful one is from the Oregon State University Extension Service.  It is titled:

and you can visit it at this link:
http://extension.oregonstate.edu/catalog/html/sb/sb681/#Climatic%20Requirements
Posted by Chad H at 7:41 PM